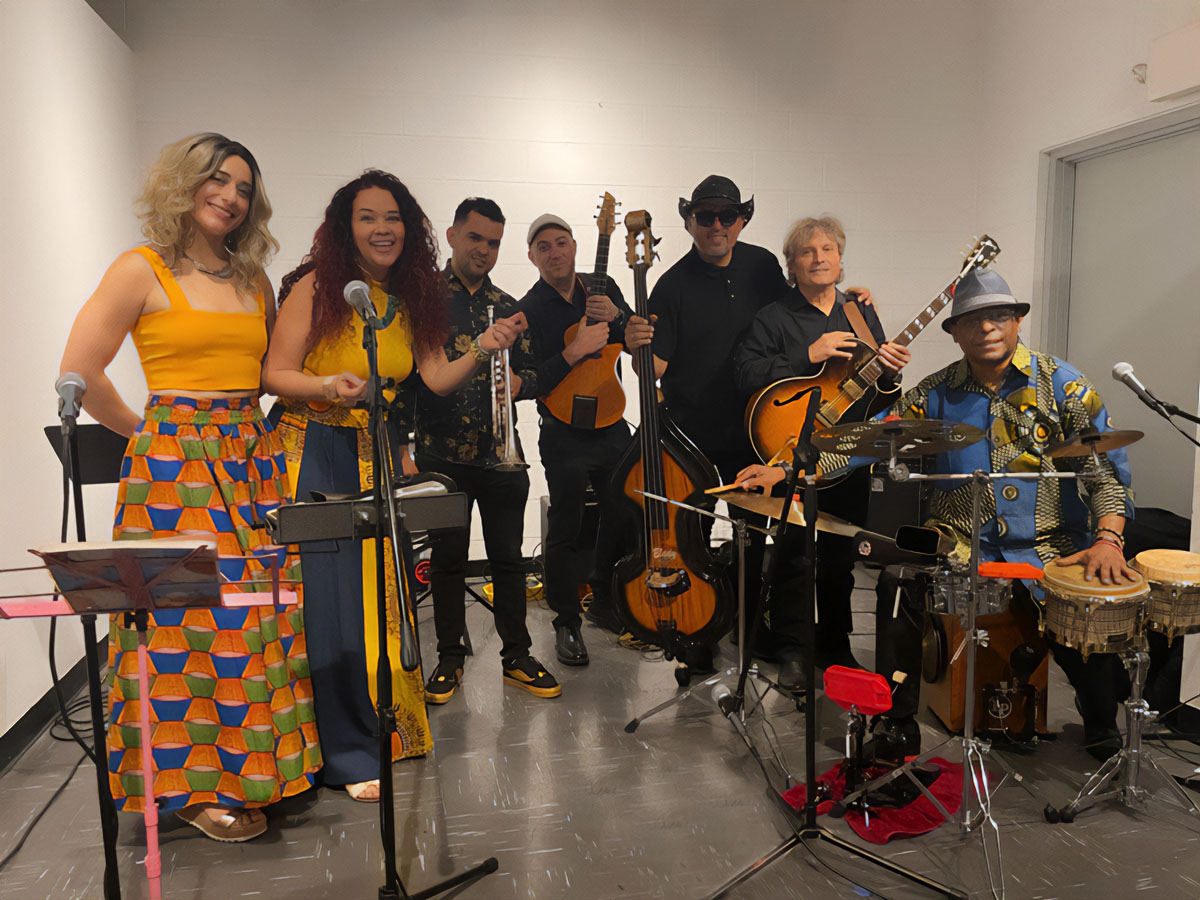 On an equal footing of course is the melodic side of this classic. “Agua” is without a doubt a beautiful melody, with lyrics that match its beauty. The newly added coro and the religiously inspired improvisations actually breathe new life into this well known classic. The operative word for this formidable ensemble of artists is tight. Rudyck Vidal’s bass is on point here, as reliable as any Swiss timepiece. Guitarist Chicoy is once again at the center of the group’s driving rhythm and the trumpet solos this time around belong to one Mr. Tony Perigo. I especially like the break in the middle and the subsequent mambo feel that follows. The chart is in no way over-written, as is the case with most timba recordings. All the vocals are done in Spanish, with Miguelo and Mariang Valdés exchanging inspiraciones. If you are in anyway feeling somber, then this is the cut that will wake your senses up and get your feet and hips moving.

Maria Grever’s “Cuando Vuelva A Tu Lado” (What A Difference A Day Made) is handled in classic bolero feeling style, alternating between the composer’s original lyrics and Stanley Adams’ English version. Without a doubt, this is the band’s unmistakeable bow to the great Dinah Washington, whose jazz ballad version won her a Grammy in 1959 and was subsequently inducted into the Grammy Hall of Fame in 1998. Marylin Castillo’s bilingual vocals are on point and one can only imagine the blues queen beaming with pride as she looks down from soul heaven at these joyous messengers of feeling.

Again, Chicoy’s guitar work is featured, ever so briefly, just before the English version comes in and then again before the somewhat subliminal fade down. During the fade too, the maestro finds it in his heart to effortlessly add just the right touch, the right feel if you will, to this great Latin and American classic. The overall mood toward the ending may seem far below the threshold of conscious perception, yet it still manages to evoke an emotional response from the listener. Always and without exception one may find oneself nodding and whispering “yeah!”.

The 1931 Gerald Marks-Seymour Simons standard “All Of Me” features guitarist David Oquendo jazzeando (jazzin’ up) some very catchy Spanish lyrics by Miguelo. The infectious mambo-jazz feel is sure to make anyone smile (and dance). This very upbeat and jubilant melody can and does segue perfectly into the traditional call and response form. Danceable as it may be, it maintains nonetheless the standard medium tempo that we’ve all become used to, with just enough spice to keep the hot and mellow element together, as well the contradictory possibilities that are associated with the not-so-abstract element of emotion. While Oquendo’s downward thrusts in the opening phrases conjure up emotional despair his repeated high notes and scats near the end hint at joyous jubilation. The feeling concept is definitely at work here, that is to say in the classic Cuban sense of the word. The percussive build-up is another part of the band’s specialty, with Miguélo at the helm. Rudyck Vidal’s chart is very hip and the addition of a coro is always a plus during the build-up or shout section, a very important factor in this type of dance format. As expected, Chicoy’s guitar flourishes compliment and decorate Oquendo’s phrasing, and not once does he get in David’s way. “All of Me” is a solid take-no-prisoners groove from start to finish, with no holds barred.

“Barbados” is the ultimate sleeper. Charlie Parker’s compositional genius is once again evoked and his affinity to Cuban and Latin American rhythms can no longer be downplayed, as both Chicoy and Sánchez weave their magical solos in and out of this very Caribbean groove. Miguelo’s swift hands are busy throughout this one, adding percussive riffs that will definitely evoke the era of Cándido Camero, Patato Valdés and Chano Pozo. It was Bird who first recorded this lovely melody in 1948 as a 12-bar blues in son-mambo tempo. Here, Bird’s lost masterpiece is given a somewhat different treatment by the Feeling Messengers, offering us -instead of a re-make- an alternate perspective on the way subtle Afro-Cuban rhythms can blend with the mellower side of jazz. Good dance music need not always be hot, and still be pleasant to the ear. The proof is right smack in the middle of this recording.

Spiritually significant Nigerian batá drums introduce the well known blues ballad “You Don’t Know What Love Is”, melding perfectly with the underlying jazz-bolero feel. With Valdés on the drum-set, the African percussion ensemble gives the piece an added dimension as well. Vidal’s bass work is an important undercurrent that is marked by his effortless grace and agility. Originally written as a pop song by Gene de Paul and Don Raye, it became a jazz standard after trumpeter Miles Davis recorded it in 1954.

Again, it was the iconic Dinah Washington who recorded the definitive vocal version in 1955, injecting the blues feeling into it. For this rendition, vocalist Jadele McPerson’s evokes the gut-wrenching emotional sadness of Don Raye’s lyrics while her delivery and jazz phrasing seek to take no prisoners. Alfredo Pino is featured on flugelhorn and his discreet obligatos move Jadele to a level of performance that brings out the haunting simplicity of this theme. Alfredo definitely gets to the heart of it all, with as much depth and feel as Jadele does with those melancholy lyrics.

Finally, the entire Messengers presentation is embellished by the addition of what Chano Pozo and Dizzy Gillespie once referred to as soul sauce, that is to say, the perfect seasoning for Billy Strayhorn’s “Take The A Train”. As with the previous selections, “A Train” features more original Spanish lyrics by (you guessed it) Miguelo. These lyrics in no way take away from the original song or it’s theme, and with all due respect, Ellingtonia was never like this, for the “feeling alliance” proceed to cook in a fashion unknown in culinary circles. Paul Sánchez sets up the well known trumpet intro and hands it over to Tathy Gálvez, whose vocalizing is nothing short of brilliant. The maturity that is implied in her delivery is there for us to hear, making her words and phrases more meaningful, thus making a familiar melody suddenly new again. Suffice to say that there is grace and inspiration unfolding throughout this arrangement and this can surely make a singer look and sound her best. Tathy of course knew this when she heard it, so the results that were achieved had to be way above average. This is The Messengers’ ultimate grand finale, and it says a great deal about the special talent they possess. The rhythms are obviously Afro-Cuban, but the jazz element, the feeling too, are also very present. The phrasing, the ingenious escapes from the written melody, the sound of the voices, the excitement of the horns, all are true to the jazz world. Dressing up Strayhorn and Ellington in mambo time does not alter their music. It only enhances it. As with their entire repertoire, the addition of original coros is the proverbial icing on the cake.

Via such a varied ajiaco musical (a Cuban version of our American gumbo), the Valdés crew will ultimately touch the hearts, minds, bodies and soul of their audience, by way of the infectious beat, catchy lyrics and good time feeling that they convey. This album, as I like to call it, provides the new Feeling Messengers with the opportunity to express themselves with complete freedom. The music here is out-and-out cubanía, but at the same time, because of its uncanny emotional depth, it crosses musical barriers. This is good music, regardless of what anyone chooses to label it.