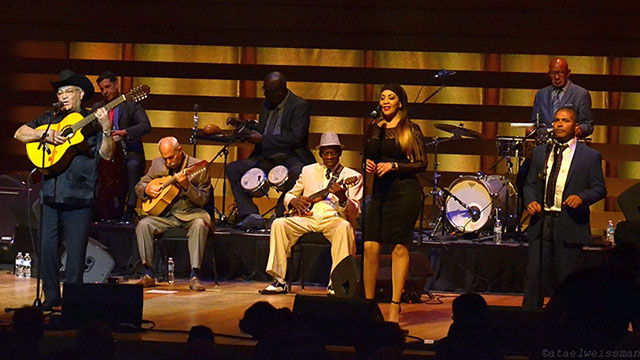 Manuel “Puntillita” Licea (2000), Máximo Francisco Repilado Muñoz aka Compay Segundo (2003), Rubén González (2003), Ibrahim Ferrer (2005), Pío Leyva (2006), Angá Díaz (2006), Orlando “Cachaíto” López (2009), Manuel Galbán (2011)… One by one they all passed away. Some of them rediscovered their old glory, if only for a time after Ry Cooder and Wim Wenders descended upon Havana to find them again and resuscitate an old idiom, an old dream – an almost forgotten dream. And then almost magically the Buena Vista Social Club found its second wind. Remarkably some like Papi Oviedo, Barbarito Torres, Güajiro Mirabal and Luis Alemañy, Eliades Ochoa and the divine Omara Portuando had survived and more than anything else, their careers bloomed again. However, time, once again, is proving to be a great leveller and the Buena Vista Social Club, three (World Circuit) albums later decided to call it a day.

And so their last hurrah began… On Sunday, September 27, they stopped over – as part of their “Adiós Tour” – at the Royal Conservatory’s Koerner Hall in Toronto to say goodbye to an adoring audience. At first we were in shock. How could such an iconic ensemble say goodbye when they had so much left in them? As the lights dimmed and the band members took to the stage, Jesús “Aguaje” Ramos led the musicians into a rousing, roaring introduction. The first segment quickly led one into the other and five other songs followed. The melodies soared. Vocalist Carlos Calunga led the well-oiled machinery of the orchestra through “Bodas De Oro” together with the beautiful and mesmerising Idania Valdés and we knew that we were in for the time of our lives. True to form the Buena Vista Social Club did not disappoint.

The music seemed to come from a bottomless wellspring. How else would you explain the growling magnificence of the bassist, Pedro Pablo, who brought Cachao to life with a star turn on “Tumbao” a classic descarga? Then the hits just kept on coming. Memories of Galbán with “Marieta” and the great Ibrahim Ferrer, with “Bruca Maniguá”. Throughout you felt the visceral excitement flowing from the stage into the audience as if the music came from the bluest part of the proverbial flame. By the time “Black Chicken” was played we knew that we were in the presence of musical royalty. If you were there and found yourself short of breath blame it on this wonderful orchestra and especially on Jesús “Aguaje” Ramos, a magnificent trombonist and musician. If the lights were dimmed any more we would have been transported to another time and another place in faraway Havana.

In fact the lights did dim and that transcendental moment arrived with the entrance of one of the evening’s headliners – Eliades Ochoa. The masterful guitarist and vocalist was never going to disappoint. In characteristic fashion and with his majestic tenor Ochoa showed us glimpses of what it was to live in the glory days of the Buena Vista Social Club. Even a broken guitar string was not going to dampen his spirit. “La Luna” was something truly special, even after the master had treated us to two other beautiful Cuban pieces. Ochoa leaving the stage (for the first time, as it turned out) meant that the stage was set for another masterful performance by Jesús “Aguaje” Ramos. But “Trombón Majadero” only served to cement the trombonist’s reputation as one of Cuba’s finest.

If the beautiful Omara Portuondo made her grand entrance that night it was only because we wanted more and our besotted souls would not be satiated but by a Goddess. Ms. Portuondo performed a short set of four beautifully choreographed pieces, but we knew it was never going to be left at that. True to form, she broke script to perform the Song of the Night… A duet with another rising Cuban piano star, Rolando Luna, featuring a heartbreakingly beautiful version of “Bésame Mucho”… And even if the entire night were wiped clean from memory this chart would stay there forever. You almost wanted to implore this divine singer to not stop but to go on and on, and on… At eighty five years old, Ms. Portuondo had more spirit than singers a third of her age. Speaking of which, age had not – would not – dim the power of her soprano. Ms. Portuondo also held the audience in the power of her hand and “Quizás, Quizás, Quizás” was a classic example of this mesmerism.

The night would not have been complete without Compay Segundo’s immortal “Chan Chan” or Pio Leyva’s “El Cuarto de Tula” and two encores by the entire ensemble seemed too short, but we lived on a wing and a prayer throughout the evening, and even if all good things must come to an end, we hoped that this spin-off from the Buena Vista Social Club, the Buena Vista Orchestra, would hold a promise of the future of Cuban són, danzón and boleros. If only the Gods would be so kind…

Photos by Atael Weissman (click on thumbnails to enlarge)