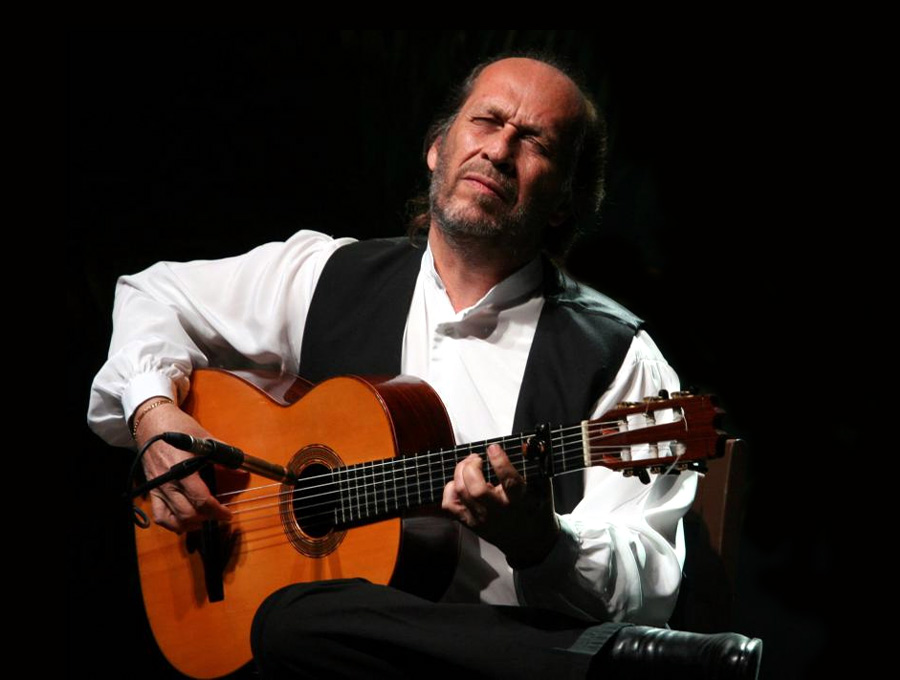 I waited for his concert with bated breath. The tickets were purchased about a year ago. Then Kuwait was invaded by Iraq and suddenly it was not safe to travel to the Arabian Gulf anymore. Like many Europeans and Americans, Paco De Lucía cancelled his concert in Dubai and I did not get to see the great one dazzle with his duende and the wizardry playing flamenco guitar. But I had my memories…

In 1984 I attended a performance of Stravinsky’s iconic Firebird Suite that Larry Coryell had arranged and was to perform at the Jazz Yatra in the summer of 1986. I interviewed Mr. Coryell after his stunning solo performance. I was enthralled by his virtuosity, but I was soon to be surprised by his abject humility. I had asked Mr. Coryell who his heroes were and I fully expected him to say Charlie Christian, Herb Ellis, and folks like that. Mr. Coryell did mention them, but then, to my absolute surprise he added John McLaughlin and Paco de Lucía to that list. I admitted to Mr. Coryell that I was fully invested in all of the artists he had mentioned, except on Mr. De Lucía. It was then that Mr. Coryell began to describe Paco de Lucía’s music to me.

It was mystical and certainly magical, Mr. Coryell told to me. It was informed by the majesty of Flamenco music and by its soulful duende. Now, I knew that Federico García Lorca had once said that duende was the deepest feeling that a man could feel in his soul. In fact it was so excruciating that a person so enthralled and mesmerised by the depth of duende could die of it. This is where Mr. De Lucía’s music took him and all those around him. Larry Coryell had been carrying a copy of Paco De Lucía’s recording of Castro Marín (Philips, 1981)a fiery recording that saw the maestro sharing the studio with both Mr. Coryell and Mr. McLaughlin as they played his compositions—various Spanish song and dance forms melding them into the Flamenco idiom. That night I listened to the music and was mesmerised.

I had never heard anything like it. This guitarist was like Paganini on the guitar. The speed with which he executed ferociously sliding glissandos was electrifying on the Colombiana, “Monasterio de sal” and on the Federico Garcia Lorca-like “Gitanos Andaluces,” a bewitching Bulería. The music was ancient in that it carried with it a thousand-year-old tradition that I remembered from the close relationship I had with my Spanish Jesuit mentors. When Paco de Lucía played the Fandango, “Castro Marin,” I was transported back to my hacienda that Fr. Peter Ribés and Fr. Joseph Aran often transported me magically to when they spoke so longingly of Spain. I felt that I was in the casa with Fr. Ribés’ aged mother, who was plying me and her son with aromatic gazpacho soup and paella. Then although a teenager I sipped spicy Spanish wine, which old mother Ribés gave me to open my nostrils, as she said.

1986 and I was years older, again in the same casa and once again with Fr. Ribés, Fr. Aran and now joined by Fr. Fabregas. We were being heralded by Paco de Lucía. I felt such a mighty tension unknot my chest as I succumbed to the music of Mr. De Lucía. I was weeping by the time we reached “Herencia,” a breathtaking Soleá. And by the time “Convite,” a Rumba came along, I was a mass of quivering flesh, and so I surrendered completely to the music. Here Larry Coryell was pitted against Paco de Lucía, and played the piece like some concerto grosso. This was followed by “Palenque,” which also included John McLaughlin and Larry Coryell. This was a masterpiece like no other and at once I began to see Mr. De Lucía’s melodious voice with its heavy harmonies break away from the voices of John McLaughlin’s decidedly English voice and Larry Coryell’s bluesy one.

The album closed with “Huída” another tantalising piece by Paco de Lucía, which was beyond the scope of human understanding. It seemed to come from a spectral dimension, played as it were by an acolyte of the great Andres Segovia. I was weeping with pain and joy. But I felt no pain in my body. Then I realised that it was my heart that ached. I had never experienced anything like this before. I was both elated and fearful. I thought I would die. Then I had an epiphany. This was not death in whose face I was staring, but something like an angel, who was bathing my tearful eyes. It was t hen that I realised that I had come face to face with duende and that Paco de Lucía had taken me there.

I returned to the Jazz Yatra and sought out Larry Coryell. When I found him at the venue, I told him what had happened and explained that with marginal differences he had felt the same when he listened to the music; and played it with Paco de Lucía. Don’t be afraid, he said. Paco’s soul will take care of you. All this comes flooding back as I mourn the loss of Paco de Lucía. The concert in Dubai, that never happened, when I thought I would finally come face to face with the maestro, Paco de Lucía. Sadly all I have is this record of bringing Paco de Lucía to life in my mind’s mind. I relive the experience as I listen to Castro Marín although by the time the music ends I am crying with grief. May his great soul rest in peace.

Ritual Beating of the Drum: The Music of Michele Rosewoman, Francisco Mora Catlett and Yosvany Terry