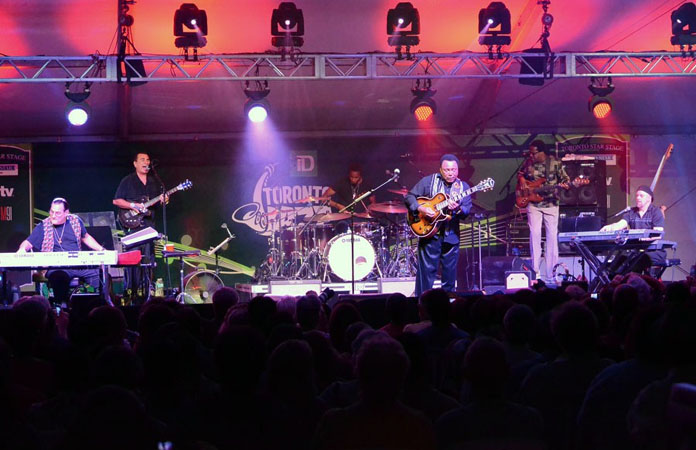 At the ripe age of 69, Mr. George Benson is not slowing down. He’s still at his best, showing why he is first and foremost an entertainer, as he likes to be considered. As a child, he started singing and playing the ukulele, and as a teenager he switched to the guitar. A passion for his instrument of choice and a love for jazz music put him quickly on the map as a young, talented sought-after musician who would evolve into something bigger. Over the years, he honed his skills as an instrumentalist, being considered as one of the best living guitar players. He went from jazz to soul, funk and R & B. A gifted vocalist and a terrific performer, he made good use of his vocal abilities and developed into a pop sensation who carved a niche with his songs, inflected with his characteristic guitar licks, which he doubles with his inimitable scating. His ability to mix genres proved to be a successful crossover formula. With a professional career that spans over five decades, Mr. Benson is more energetic and electrifying than ever. No doubt he’s still got it.

A large crowd filled the main stage of the 2012 TD Toronto Jazz Festival on the evening of Tuesday, June 26. The opening act was the talented Treasa Levasseur, a Winnipeg born music star that made Toronto her home. She prepared a very enthusiastic and appreciative audience for the main show of the night.

Mr. Benson expressed his love for Toronto the best way he could, by setting the stage on fire. He revisited his long list of greatest, timeless hits: “Breezin”, “Turn Your Love Around”, “Love Ballad”, “Lady Love Me (One More Time)”, “Give Me The Night.” He also performed songs from his most recent recording entitled “Guitar Man.” Mr. Benson said he could return very soon to our city with one of his most cherished projects: “George Benson: An Unforgettable Tribute to Nat King Cole.” The show came to a close with “On Broadway,” a piece successfully covered by Mr. Benson on his 1978 recording “Weekend in L.A.”

Review and Photographs by Danilo Navas