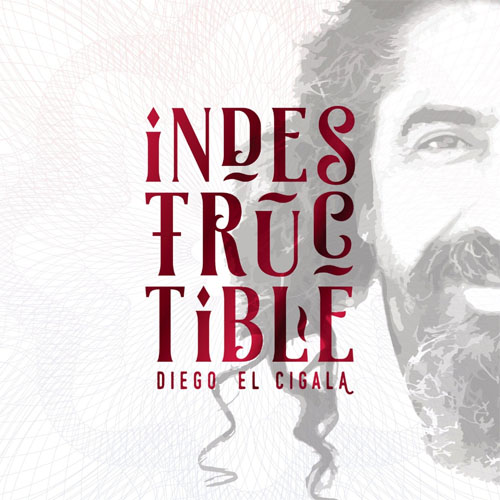 In late October of 2016, the world looked forward to listening to one of the most awaited salsa albums in history, interpreted and produced by one of the most brilliant flamenco figures in the last few decades, Diego El Cigala.

A year and a half later, here we are, remembering this magical contribution to world music; the album Indestructible is a touching and unique work that combines the essential elements and rhythms of the salsa genre. Cigala achieves this unbelievable artistic interpretation level not only because of the participation of some of the most talented salsa musicians, but also because of his soul and passion for  universal music, the rooted musical expression.

One could say that the participation of more than 70 salsa and Latin stars guarantees the sound and success of this album, but there is more here than success and constellations; this is about roots and genes and soul. The core of this masterpiece is Cigala’s blood, the vital fluid that runs through his veins, moving Indian, Asian, Latin, Arabian, Caribbean, flamenco and tango poetic streams that go back and forth through each of the songs that make up this CD. This album has been labeled as salsa music, but in fact this work is about world music. You can find a great range of cultural spirits and expressions between the musical lines in each song.

There was no other better way to start this album than with the theme “Moreno Soy” (Black I am), a catchy and profound syncopated song that invites you to clap, tap and dance. A timbal fast sound and powerful trumpet and saxophone lines introduce the sentimental and incomparable voice of Cigala who tells the listeners about the theme of being raised as a black person and that at the core of our hearts we are all black. The color of Cigala’s voice is so impressive that it could symbolize the voice tone of any indigenous singer in any culture around the world, and yet his particular pitch is unique to only him. His pitch is low and high at the same time, his sound is husky and dark, but clear and touching too. After singing the main lines of “Moreno soy”, the descarga arrives to stay with the dancer, accompanied by the incredible “pregón” of Cigala. The mastery of this Spanish vocalist goes beyond any comparisons that can be made to the legends of international Afro Latin music. This is demonstrated in the last part of “Moreno soy” where he dialogues in a sublime and rhythmical way with the brass lines, spreading indescribable sentimental pregones, that create a perfect symbiosis with the rest of the orchestra.

Indestructible was the result of a fascinating journey to several salsa capitals including Cali (Colombia), San Juan (Puerto Rico), La Habana (Cuba), Punta Cana (Dominican Republic), New York and Miami (the United States), where he recorded part of this album. His final musical destination was Jeréz de la Frontera, in Spain where he added the flamenco touch including guitars, choruses, a cajón and flamenco hand clapping.

One year later after the album was released, the documentary Indestructible, el alma de la salsa (The Soul of Salsa) with almost the same name, was presented to the world, with images that demonstrated how this incomparable album project was conceived and developed. The world was astonished by the feeling and passion that Afro latin music legends showed on the screen. To have musicians like Oscar D’Leon, Bobby Valentin, Larry Harlow, Roberto Roena, Eddie Montalvo, Nicky Marrero, Jorge Santana, Gonzalo Rubalcaba, Los Muñequitos de Matanzas, Luis Perico Ortiz, Horacio el Negro, José Aguirre and Diego del Morao, interacting and playing with Diego el Cigala, is truly a reflection of a new art world wonder. As the protagonist says in this documentary “esos genios fueron la salsa y serán la salsa por siempre, porque la salsa es indestructible” (those geniuses were and will be salsa forever because salsa is indestructible).