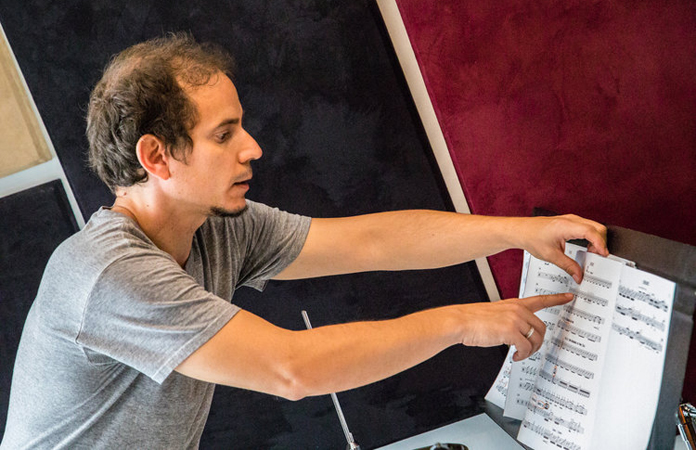 RdG: How do you think that you achieved your objectives with Back to the Sunset?

DP: I’m very pleased with the result of the album. First of all, I wanted to dedicate this album to some significant musicians that have influenced and inspired me one way or another. So I invited three of them; and we had Brian Lynch, Steve Coleman, Henry Threadgill playing different songs in the album. I think we also selected a wide range of music, sounds, and textures throughout the album. The band sounded very strong and interpreted the music confidently with great musicians playing together as well as in each of the solos. So, yes – I’m really happy with the album.

RdG: How did you approach the work? Did you write and arrange with specific players in mind?

DP: This approach changed back and forth. For instance here, but many times I liked to think of who was going to play the parts, because I had already imagined the specific sound. That’s beautiful when it all works out. But, if unfortunately when one person doesn’t end up playing at the concert, then I end up looking for someone that has a similar kind of approach, or sound. And the other way, I will write the music, and then look for the musicians that would work best for that music. In case of the Big Band, I wrote some songs and arrangements with some specific players in mind, because I knew they were going to be part of the band.

RdG: Musicians come from different “places” in music… Was it difficult to bring Henry Threadgill together with someone like Joel Frahm?

DP: Quite the opposite, (in my case) I think most musicians in the band knew about each other’s playing and works, and even though some musicians were coming from different backgrounds and musical styles, we were all very excited to make this collaboration. In fact, Joel was really excited to meet and play with Henry. I don’t think I would (have considered) having a musician in the band that doesn’t have the ability to jump in (and) dismiss all musical boundaries.

RdG: How different was the experience of making this recording?

DP: This album was a much bigger production than anything I have ever done; we had to do an intensive crowd-funding campaign for over a year, it involved a lot more people, so it required much more organization, and coordination in different fronts. But, I will say that having these great musicians in a room playing the music ‘that’s the most special experience of all.

RdG: What comes next?

DP: Well, we are now concentrated on doing the booking for the big band, and see if we can bring the music live to some places. In terms of new works, right now I don’t have any specific plan of what it could be next. There are a few possibilities, so I guess I’ll have to pick one sometime, but nothing urgent at this moment.

On Teaching Music and Playing Music

RdG: What is your view on formal training for musicians? Is there, for instance, a big disconnect in “learning” vis-a-vis “producing”?

DP: This is a subject with many branches. The short answer is that I don’t think there is a big disconnect. In the school you can get lots of information, while learning, and networking with other colleagues that think alike. I think everyone has their own individual way of doing things, mostly when it comes to investing their time, and making choices. At the end, no matter which school you come from, you have to find what you want to do on your own, during and when you are getting out of school. I think that’s true to everyone, or most of us.