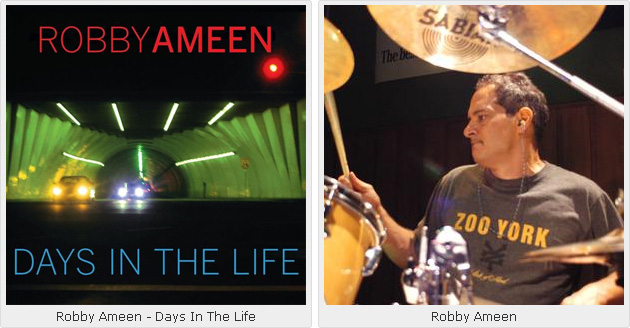 Robby Ameen is one of those first call percussionists who has been chaffing at the bit to produce something all his own. Now he has his chance, with Days in the Life and he acquits himself with excellence. Things might have very well gone awry, as so often happens when self producing the first record. This, however, does not happen with Ameen, as he is careful to avoid the obvious, at all costs. The percussionist is well known for his abillity to slip into almost any kind of rhythmic mode, whether deriving from samba, or with clave or swing. He does just that and then some… Ameen soaks it all and, as it percolates in his percussion brain, he channels it out through his arms and fingers into a mix of rhythms that comes alive with surprises at almost every turn.

It seems that the prime directive of the music is to dance madly as one on hot coals or a tightrope or a trampoline. There is never a dearth of surprise in anything that Ameen does–alone, or in conjunction with bandmates such as guitarist Wayne Krantz and bassist Lincoln Goines. Of course the brassmen–Conrad Herwig and Brian Lynch, both deeply in the pocket at all times, light blue flames to the melody trailing in behind it or racing in front with florentine swirls and madcap runs. Trombonist Herwig, in particular, solos in great swathes of sound that begin rather quietly and then build up into mountainous tones of great harmonic consequence. John Beasley–probably missing clave in his wrists–makes up for it all by playing beguiling lines on Hammond B3 and Fender Rhodes.

Ameen is fiery on almost every song, but really pulls out the stops on his stunning composition, “Skateboard Intifada.” The title is brazen as his drumming, with furious rolls of the tom toms and heavily laid bombs on the bass drum at breakneck speed. The funky riff is followed simply but memorably by Goines, Krantz and especially Beasley. The composer also shows great tenderness in his ballad, “Una Muy Anita” and brings new fire to Joe Farrell’s “Sound Down.” “Stagger” is a fine example of a visually driven piece, where Ameen shows great skill in varying the beats to create a feeling of unsteady, but purposeful movement. His off-key figure with guitar and organ is also well knit into the melody. Krantz plays in gut-wrenching style. “RR” is a spectacular duet with conguero, Ritchie Flores.

Essentially, though this is a vehicle, which is crafted to display Ameen’s compositional skills. In this department, he brings off a near flawless performance. The percussionist also shows that he is unafraid to step outside the comfort zones of easy-to-execute rhythms. Nor does he shy away from brash and forthright manners of expression. His songs are based on sound melodies, which he writes cleverly for the bass as well as treble clefs, and this is a rare feat indeed for any percussionist to pull off.

[audio:http://www.latinjazznet.com/audio/reviews/Robby-Ameen-Ceora.mp3|titles=Track 7 – Ceora by Robbie Ameen – From the CD “Days in the Life”]

Robby Ameen on the web: www.robbyameen.com