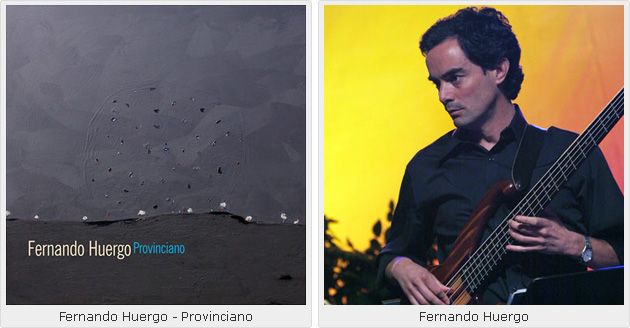 This is not just another record of music by an Argentinean musician. Provinciano is a brave attempt to create a new metaphor based on traditional harmonics and rhythms that inhabit the Argentinean Tango and folkloric music. Fernando Huergo, bassist extraordinaire makes a huge leap of faith as he – first explains – and then demonstrates the depth of his creativity and staggering virtuosity in his musical sojourn and his organically evolving bass playing.

Alejo Carpentier once wrote, fictionally of course, of a journey that he once undertook to find the origin of sound. That mythical journey took him into the Amazon and where he lost himself among a very primitive, yet sophisticated people and discovered the magical elixir of sound – a pure sound itself. On Provinciano, Huergo makes a similar journey; only his is one that can no longer traverse a primitive sound scape. But his is a journey that takes place in the interior landscape of the musical mind. Here the musician has imbued the many magical rhythmic impulses that ignite creativity. Amazingly, these parallel the same impulses that have driven jazz music through the ages. The impulse to create continually through time and space – to improvise. Then there is the element of swing and the joyful heartache of the blues.

The music on Provinciano in many respects is a Latin refraction of jazzical modes, but daubed in the lush tones of the provincial. The rhythms are sometimes challenging and may appear to be a tad clever, which they are not… simply accurately describing a tradition that is given new meaning in the modern context. “One in Ten” a track written in 10/8 time is a case in point as is “A Mil,” where a Piazzolla tango might go musically if he were to play it today. Here Huergo is not only proficient technically, but also displays a wonderfully puckish sense of humor. There are two tracks written in Chacarera modes and others in the form of aire de milonga and aire de vidala – folkloric wonders that are completely modern in statement and form. Amazingly, even programmatic pieces such as “The Cost of War” and Coltrane’s lesser masterpiece, “Lonnie’s Lament” also work as folk forms. (Mingus did this many half a Century ago with Thad Jones on his own album, appropriately entitled Folk Forms). These two tracks may unconsciously hark back to that masterly excursion as well.

Finally, a word about the musicians. Huergo is a fine technician, but he plays his bass with great feeling and expression as well. The musicians who honor the compositions have also given a fine account of themselves. Andrew Rathbun and Yulia Musayelyan on saxophones and flute, respectively, have an uncanny sense of empathy for the music, which it would appear, is written with them in mind. Mika Pohjola and Franco Pinna are also artists of enormous rhythmic skill. Together these musicians have all the makings of a long-term partnership, which is to say more music of greater, import sooner rather than later.

Fernando Huergo on the web: www.fernandohuergo.com