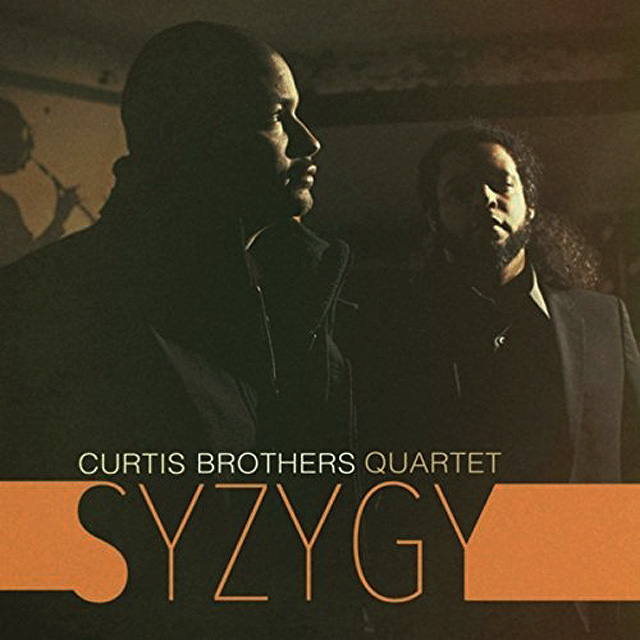 Don’t let the trinkly, yet resonant sound of the Fender Rhodes, announcing the advent of Mongo Santamaria’s “Afro-Blue”, to kick off the Curtis Brothers Quartet’s Syzygy throw you off. Wait until Zaccai Curtis steps aside to let the short roaring conga solo by Reinaldo De Jesus grab you by the throat. The drums of Richie Barshay and deep rumbling of Luques Curtis’ bass join in the action soon, soon followed again by the rolling thunder of the congas again. The supplanting of the Rhodes with a concert grand is meant to convey a certain blithe spirit that Mongo Santamaria surely wanted for the song too. It’s just that nobody ever though to interpret it in the carefree manner of this rendition.

But then there are not many musicians like the Curtis Brothers. Bristling with talent whatever the idiom, whatever the style and wherever the action is. Zaccai Curtis is a pianist of great virtuosity who seems to shy away from the limelight. Few keyboardists can make the Fender Rhodes sound as magical as he does and his wildly evocative solo on Dizzy Gillespie’s “Bebop” will bewitch and beguile endlessly. Hectically played it challenges Barshay and De Jesus to run with him and it’s when we get to Luques Curtis’ solo that he (Luques Curtis) slows things down by almost halving the beat, if only for Barshay and De Jesus to pick it up again. In recent times, only Bobby Sanabria‘s version of “Bebop” with John Di Martino on piano, Jay Collins on tenor saxophone, Andy Eulau on bass made for a more vivid scrimmage.

No less startling is The Curtis Brothers Quartet treatment of “Betcha By Golly Wow” and of Wayne Shorter’s “Yes or No” – both deploying with studied grace and aching beauty. On the latter, Luques Curtis solos with enormous gravity. His golden tone is both luminous and redolent in the golden hues that he selects from his considerable colour palette. Together with Zaccai Curtis he transforms the entire discourse of the piece, casting a burnished glow over the music. Zaccai Curtis’ bright, airy style of playing is cool and deliberate and he brings to the passagework a transparency and gracefulness that is often hidden by other pianists. However, he can pick up the pace on a dime and infuse music with fiery elegance. Bud Powell’s “Hallucinations” and “Bebop” are fine benedictions of that spiritedness.

Zaccai Curtis’ greatest quality as a pianist is that he refrains from pummeling the keyboard, even at the most breakneck speeds and yet his rhythms are buoyant and crisp. He uses the Fender Rhodes on several songs on Syzygy and nowhere more beautifully than on “All of You”. Luques Curtis is similarly unobtrusive to the point of being almost self-effacing. And yet every note he plays is thoughtful, remarkably nuanced and incredibly voluptuous as well. His brief solo on “All of You” and his breathtaking improvisations on “What’s Going On” make for some of the most remarkable moments on both the song and on the entire album. This, while Zaccai Curtis’ finest moments come on the profoundly beautiful “Cheer Up Charlie”, Anthony Newley and Leslie Bricusse’s equally beautiful creation.

Both Richie Barshay and Reinaldo De Jesus provide some of the most attractive brushstrokes to the music on this album. The muted colours of “Hi-Heel Sneakers” turns the song on its proverbial head, imbuing it with a greater sensuous that its rock-and-roll versions including the celebrated version by Elvis Presley that made the song famous in the first place. Here too, Luques Curtis draws from a limpid palette as do the drummer and percussionist, as all four musicians caress the contours of its melody. The warm, non-invasive acoustic of this recording make it one to remember the Curtis Brothers Quartet by. Its ambience ascends constantly, eventually reaching a rarefied sonic realm.

Track List: Afro Blue; Hallucinations; Bebop; Betcha By Golly Wow; Yes or No; Syzygy; Start the World I Want To Get On; All of You; Hi-Heel Sneakers; What’s Going On; Cheer Up Charlie; Quicksilver.