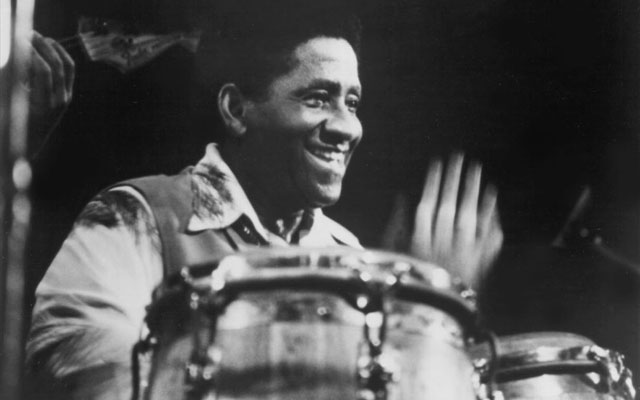 This superb music from 1956 has an odd footnote at the bottom of my copy, which says “Recorded under the personal supervision of the Fidel Castro Regime in Havana, Cuba…” I feel compelled to suggest that it was not the intention of Mongo Santamaria to have that footnote on any of his albums. He was merely a victim of circumstance and the attempt to ‘politicise’ anything that came from post-revolution Cuba was merely to possess all Afro-Cuban art. That, or Mongo Santamaria was forced to accept that in exchange for plying his art in peace. Either way the extraordinary music far supersedes the facile attempt to possess Cuba’s sons and daughters. The music soars. 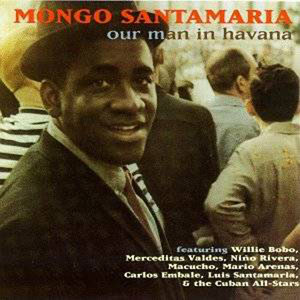 Mongo Santamaria was one of the finest congueros ever to grace the Afro-Cuban music scene. His warm tone and enviable technique far out lives – in many respects – the great hits he had with Afro-Blue and Herbie Hancock’s Watermelon Man. He makes the technical aspects of art seem fluid and difficult sonorities eminently easy. His playing is extremely beguiling and never was heavy-handed note ever played under his watch. Yet he is an outsize virtuoso with a repertoire to match. On this classic album you will rarely if ever hear Mongo Santamaria’s introspection caught and held with greater affection and finesse. And whether in his torrential if superfine virtuosity or in a more rarefied poetry of his playing, his command is phenomenal.

Compared to Afro-Blue and Watermelon Man, this repertoire is relatively unrecognisable, but it is important to note that the beautiful compositions are almost all the work of Mongo Santamaria. Played by one of his fine big bands, listeners will be able to thoroughly enjoy the occasional volatility to more familiar patterns and lyricism; how caressingly he embroiders his solos as well as his ensemble playing. No red-blooded Afro-Cuban music connoisseur will be able to resist the mesmerising cha cha chá and guajira rhythms. It is here as well as in son and danzón that Mongo Santamaria is flawless and quite unforgettable. He takes us into a world that is defined by unstoppable rhythm and his playing is of an unfaltering poise and translucency.

Sadly this recording has been all but forgotten, though there is much hope for everyone inside and outside of Cuba that someday soon, just as Nick Gold and Ry Cooder, and Jane Bunnett and Larry Cramer have done Cuban music will experience another renaissance and by some wave of a magical wand, classic music such as this will find its way onto record once again so that the art of Cuba will be exposed and enjoyed anew.

Ramón “Mongo” Santamaría Rodríguez (April 7, 1917 – February 1, 2003) was a rumba quinto master and an Afro-Cuban Latin jazz percussionist. He is most famous for being the composer of the jazz standard “Afro Blue”, recorded by John Coltrane among others. In 1950 he moved to New York where he played with Perez Prado, Tito Puente, Cal Tjader, Fania All Stars, etc. He was an integral figure in the fusion of Afro-Cuban rhythms with R&B and soul, paving the way for the boogaloo era of the late 1960s. His 1963 hit rendition of Herbie Hancock’s “Watermelon Man” was inducted into the Grammy Hall of Fame in 1998. Read more…