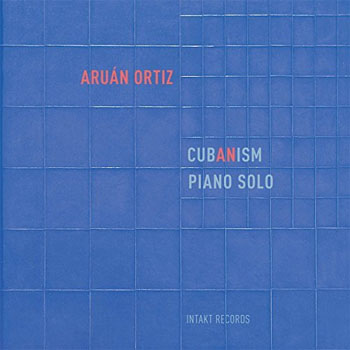 This record, Cub(an)ism by Aruán Ortiz is a mighty sojourn and follows a somewhat wayward hurricane-like path covering many continents. But if a survey were to be made of it as it would many musicians – especially pianists – coming out of Cuba, one would find that every single one of them would fall between Bach and Liszt first and foremost because the basis of all Cuban pianism is classical. But there was and will probably always be an internecine battle for share-of-voice within the subconscious by Jazz musicians especially Art Tatum, Charlie Parker, Dizzy Gillespie, Thelonious Monk and Bud Powell… and once enlightened and free of the transistor radio and the conservatoire, the well-travelled musician will return home to his or her African roots especially via Haiti to Nigeria, lands spanning Senegal to the Congo; from Central and West Africa including Benin, Guinea Sierra Leone, Windward Coast, Angola, Cameroon, Nigeria, Ghana and Southeast Africa and Madagascar.

It is in its own way a torturous but in the end, an edifying return ‘home’; a freedom from slavery of body and soul and a return journey to a vision of Africa that could fit these modern times of the 21st century. Listening to the epic journey of Aruán Ortiz on Cub(an)ism is like bearing witness to such a journey; such is the thrillingly tumultuous soundtrack of his voyage as he unfolds a complete reworking of his newly rewired brain using the flowing movements of his right hand and the chopping, percussive left hand on the grand piano in a frighteningly virtuosic meld of Baroque and modern contrapuntal writing, ancient drumming and colourful daubing as if by brush-like fingertips on a living canvas of music. Not all the work is immediately appealing, but all of it eventually captivates the mind as Aruán Ortiz effectively reconciles his various stylistic approaches and finds a uniquely cogent ‘aural/visual’ voice, characterised by beautifully, unaffected melody, harmony and rhythm.

Cub(an)ism is a revolutionary evolution that has Aruán Ortiz traversing an enormous musical topography. It is an exhilarating, transitional work that fructifies in the pianist’s fascination with visual art (Cubism) and its influence on the rhythmic structures and contrasting instrumental ‘personalities’ (in its arpeggios and silken glissandos his piano seems to pay homage to the violin and the viola) that do battle with metronomic versus the lyrical – as in “Louverture Op. 1 (Château de Joux)”, “Cuban Cubanism” and “Intervals (Closer to the Edge)”. While “Density (Golden Circle)” and “Dominant Force” seem to have sprung out of a different musical universe entirely, an adrenaline-charged musical jeu d’esprit in which modernist techniques are given an outing with oblique nods to his old influences from John Cage to Muhal Richard Abrams, uniquely sung in a voice all his own, of course.