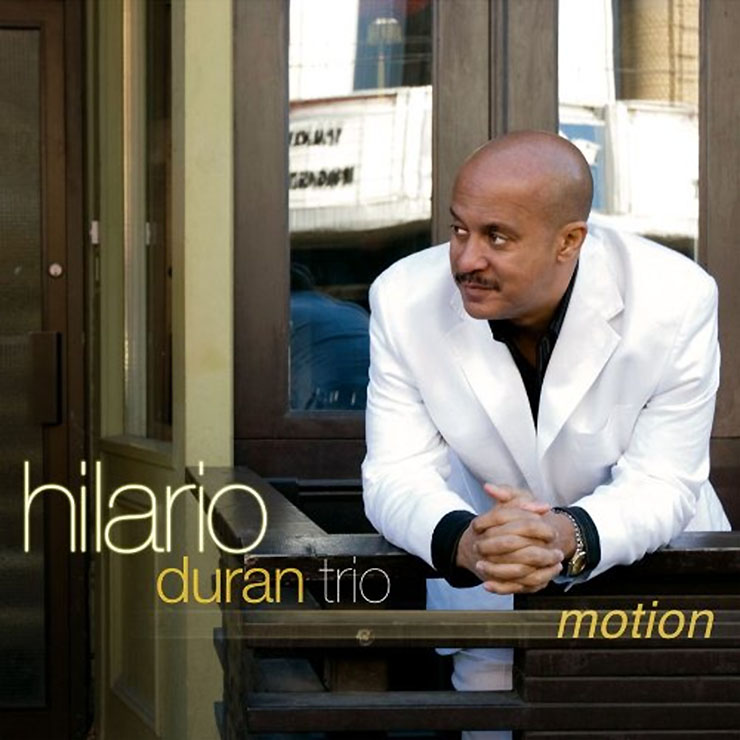 In his much-anticipated follow-up to the Grammy-nominated and Juno Award-winning Latin Big Band recording, From The Heart (Alma Records, 2008) the piano master, Hilario Durán brings together a power trio comprising bassist, Roberto Occhipinti and drummer, Mark Kelso. In the process he has created Motion, a memorable, new canvas of sound, unveiled through a palette of vivid tonal colors throughout the album’s eight tracks. The record bustles and breathes with myriad rhythms that are so unique to Hilario Durán’s music. He is a unique pianist, quite without peer in the realm of tumbao, the melodic bass lines that burst out of Durán’s music. This killer tumbao, as it is often called, propels Durán’s piano playing throughout brilliantly crafted ensemble passages where his right hand promotes a gentle simpatico weaving melody into the musical souls of his bandmates, Occhipinti and Kelso. His harmonics are stunning and he enrobes the melodies with these rich tapestries of sound often, with surprising color, to make the songs pirouette like dancers. His solos are always inventive, turning melodies inside out and often coming at them with a sliding, angular attack replete with single notes and ferocious chord clusters, so that they are freshened every time he touches the song.

This memorable set begins with “It’s Only Seven,” a song featuring a complex rhythmic structure that sets the pulse racing with a 7/4 beat. Its melody is alluring and, with bassist Roberto Occhipinti and drummer Mark Kelso in fine form, the song proves to be a true kicker. Occhipinti is sensational as he navigates through the fine rhythms with some propulsive and yet nuanced melodic playing. “Conversation with a Lunatic,” a puckish song vividly suggests a jitterbug-like encounter. Here too, Durán creates whorls of sound with contrapuntal figures that turn this track into one that burns with a bright blue flame. Next, Hilario Durán probes a seemingly familiar melody with refreshing and vigorous new ideas: “Havana City,” is a track filled with a sense of languidness that captures the lilting swagger of the rhythms of that city. The song is long and meandering and meditative. The feeling of emotional longing is heightened by the short opening featuring delicate strings, fluttering percussion and aching vocals atop resonant batás by the incomparable Joaquín Hidalgo. Hilario Durán’s playing here is soft and luscious as it appears to caress an almost feminine persona of Havana. The timely accented splashes of Mark Kelso and Roberto Occhipinti’s remarkable bass playing provide a superb rhythmic backdrop that keeps the song swaying and sashaying throughout.

“For Emiliano,” is an emotional tribute to Durán’s compatriot, pianist, Emiliano Salvador. This burgeoning arrangement has a distinct underpinning of sadness. The elegiac mood has some very thoughtful expansive piano playing and compelling bass work by Occhipinti as they seem to recall the spirit of Emiliano Salvador in a gentle wake full of clave. Kelso enjoys an explosive break here, while Durán comps effortlessly and later takes the song home. The album continues to surprise with “Tango Moruno,” which—as the title suggests—is a proverbial doffing of the hat to a form of music that came from nearby Argentina. Jamey Haddad excels as he manipulates the rhythm with remarkable percussive colorations. “Danza Negra” is a deeper excavation of the African side of Hilario Durán’s music and even though nothing is sung there is a bright mélange of danzón and earthy tones of the conjuring up of Yoruba spirituality as it fades with a flourish.

“Motion” is what the entire new experience of Hilario Durán’s music is all about. The musical roars from out of the starting blocks. Durán drives a labyrinthine rhythm in yet another complex figure of swing and clave. In his sensational and abrupt changes in rhythm Durán displays a new maturity of musicianship. He cajoles Roberto Occhipinti and Mark Kelso to reach deep into themselves to emerge with uniquely expressive ideas. The set ends with “Timba en Trampa,” a new dancing song that puts the proverbial sting of this delightful new record in its tail. This track is based on an angular 6/8 figure. The chopped rhythm—highlighted and enhanced by some excellent conga work by Luis Orbegoso offsets Durán’s flying fingers across the ivory and ebony. Here Durán also shows a fond affection for Thelonious Monk with his creative and architectural compositional style and displays complete mastery over every aspect of the musical process adorning this sublime, unforgettable album.

Considered to be one of the world’s great Cuban pianists, composers, arrangers and educators, Hilario Duran (ALMA Records/ Universal Music Canada recording artist) has been nicknamed “Con Tumbao” for his creative use of the tumbao repetitive bass figures. Now based in Toronto, Canada, Hilario graduated from the Amadeo Roldán Conservatory in Havana, Cuba. In 1973 began working as a professional musician in Cuba’s Los Papa Cun-Cun Ensemble and a variety of musical format.

In 1975, Hilario’s career took an important new direction working with The Orquesta Cubana de Música Moderna; this orchestra gave Hilario the opportunity to start to grow in his career learning orchestration from performing the scores by well-known Cuban arrangers such as Rafael Somavilla, Armando Romeu, and German Piferrer gaining the necessary skills to start to work at the famous Havana EGREM recording studios, first as a pianist, and later on as an arranger, composer and musical director. In the nineties, Hilario also worked with a variety of internationally acclaimed Cuban artists including: Arturo Sandoval as pianist, main arranger, and music director; to name some of a few of his accomplishments during this period of his career. Since arriving in Canada in the late 1990’s, Hilario has established himself as a pianist, arranger and bandleader in his own name. His appearance and tours with and on Jane Bunnett’s famed Juno award winning Spirits of Havana recording in 1990 gained him new recognition in this country including recordings for Justin Time Records and Avalon Music Records. As the leader of his own groups, and currently recording with the great Canadian record label ALMA Records, (Hilario Duran Trio; Hilario Duran and Perspectiva & His Latin Jazz Big Band) Hilario Duran is a multi Canadian Juno award winner and nominee; an American Grammy nominee; a multi Canadian National Jazz Award winner & nominee; and the proud recipient of the 2007 Chico O’Farrill Lifetime Achievement Award, from Latin Jazz USA, for talent and outstanding contributions to Afro Cuban Jazz and Latin Jazz. Hilario Duran has been selected as One of the 10 Most Influenced Hispanic Canadian 2009. Latin Jazz Corner wrote that Hilario Duran is one of the world’s “contemporary Cuban pianists that moved jazz in the 21st century.”