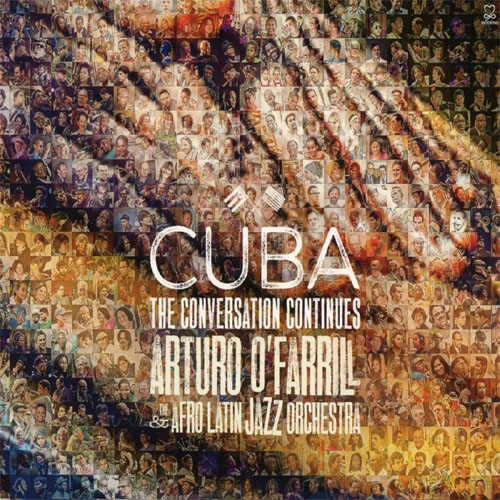 The year 2015 has seen two monumental musical works where Afro-Caribbean music collides with Jazz: The first is Elio Villafranca’s suite, Cinque which was premiered at Jazz at Lincoln Centre and has since been performed in Bolivia with the Symphony Orchestra there. The second is Cuba – The Conversation Continues by Arturo O’Farrill and the Afro Latin Jazz Orchestra. This large ensemble led by Mr. O’Farrill, son of the legendary Chico O’Farrill is augmented by celebrated musicians from both Cuba – including the incomparable Bobby Carcassés – and the US – starring Rudresh Mahanthappa and Michele Rosewoman. However it is not so much who performs on this recording as much as the compositions that make up this extended work: five American composers and four Cuban ones. The size of the performing cast and the production staff that worked on this project was also phenomenal – over a hundred – making it akin to a big budget film. In fact it is hoped that there is, in fact, a film that has documented this mighty project.

But to begin at the beginning, I am not sure why Arturo O’Farrill is not considered in the same breath as his father, Chico. Just like the latter, the son also rises. In his “Afro Latin Jazz Suite” the centrepiece of this 2-CD set we’ve finally scotched once and for all the notion that he could not orchestrate as effectively as his father. Yet this opus is one of the most remarkable pieces you’ll ever hear in all chamber music. It fuses the idioms of Afro-Caribbean and Afro-American in the grand manner. The thesis here – spelled out by the sub-text of this recording namely “The Conversation Continues” – is meant to suggest that this magnum opus continues the music dialogue between Latin American music and Jazz – from where Dizzy Gillespie and Chano Pozo left off, i.e. from “Manteca” that great composition which has been forever etched in the memory of anyone who is besotted by Afro-Caribbean and Afro-American music. The cumulative impact of this music is so great that it pounds the interior landscape of the mind to such an extent that it strikes one as the unique combination of energy and fervour as the performances make you fall in love with Music all over again.

Let’s not, however, suggest that Arturo O’Farrill’s composition is all there is to this record. There is more, a lot more, from composers such as Michele Rosewoman (“Alabanza”), whose New Yor-Uba has already established itself as one of the finest ensembles of its kind with her last record that celebrates 25 years of that stellar group. Then there is one (“The Triumphant Journey”) by Dafnis Prieto, a young drummer who emigrated from Cuba to the United States and who has since cemented his reputation as one of the more serious composers in the US. There is a beautiful work, “Second Line Soca (Brudda Singh)”, from the great Earl McIntyre, who has graced many an important ensembles including ones by Charlie Haden and Carla Bley. Add to that superb music by Bobby Carcassés “Blues Guaguancó”, by the Cuban Michel Herrera – “Just One Moment” – and “Guajira Simple” by Alexis Bosch. There are a total of five contributions from American and four contributions from Cuban composers each sketched at white-hot pace and performed as if dwelling in the arc of that flame.

I can find few words to describe their greatness. They seem to mark the furthest limits that can be attained by human art and imagination. Moreover this ensemble has set the bar very high with their astounding fresh, supple readings of the material and when the time comes it will be no surprise that this recording will garner a clutch of awards (to be shared by Elio Villafranca’s work if it is put down on record. The music is not only of great significance. It is played with such energy that it literally blows the lid off “The Big Top”. It is colourful, beautifully managed – sustained, with a clarity of counterpoint pointing up to the individuality of the musicians as well as their collective finesse that is very much in keeping with the vision of its leader, Arturo O’Farrill, and packs a punch so great that it literally hits it out of the proverbial park. Soloists are magnificent: from alto saxophonist who opens Mr. O’Farrill’s Suite; pianist Michele Rosewoman, the great Bobby Carcassés who makes his “Blues Guaguancó” truly unforgettable, as memorable in fact as the music of Mr. O’Farrill’s sons – Adam and Zack – featured with the ever wonderful DJ Logic – in an extraordinary Arturo O’Farrill composition “Vita Frita”. And then, of course, there is the beautiful work of Earl McIntyre and Renée Manning on Mr. McIntyre’s superb composition.

Most of all there is the Afro Latin Jazz Orchestra who is unafraid to use portamentos which is applied with particular elegance to melodies throughout, which is here encased in warmly voluptuous sound. The ensemble is most impressive and particularly compelling as they tackle the rhythmic vagaries of Afro-Caribbean and Afro-American metaphors in superbly adrenalin-pumped affairs. Shifts in mood – no matter how subtle and real a challenge – are superbly caught. The recording is immediate and present. The notes combine scholarship with readability and are particularly enlightening when it comes to performance details – too vast to be detailed in this review. This is an altogether flawless recording that is a must for any collection.