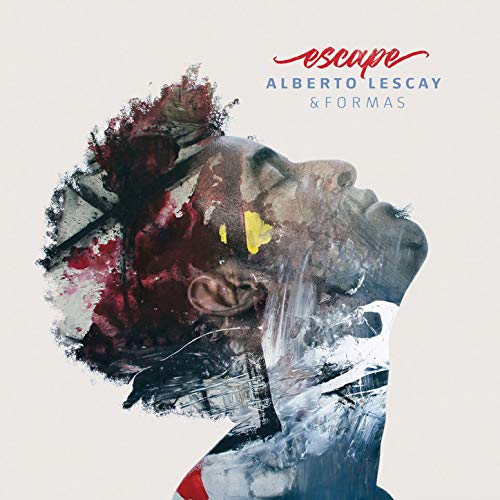 The title Escape has an intriguing ring to it. Escape from what, you might ask? And then the music begins and you get the idea. Alberto Lescay makes a powerful case for wanting to break out of what some might suggest are restrictive confines – the rigid metre of traditional forms even while embracing then only to propel his music into the future. The wildly brilliant trumpeter (and inventive keyboardist) has written seven of the eleven charts on this recording and it takes but a few bars with which he opens “Invasión” to discern that while standing on the shoulders of two giants – Irakere and Perspectiva – he is leaping into an altogether rarefied realm.

It is a musical act that is reminiscent of that explosive transition in Jazz of swing to Bebop, and then to Hip-hop and rap with music that bubbles and boils over with raw, viscerally exciting energy. The rumbling of bass and drums – though not quite thunderous as that combination that produces the explosive vibration of Hip-hop – is ever-present in the effervescent “Invasión”comparsa that, with it’s electronic second part, turns dark and mysterious before brightening up with its rap again. This gives way to the mesmerising trumpet and guitar-driven “Controversia”.

With both these songs and especially with “Mariposita de Primavera”, Mr Lescay seems to suggest that the tradition that we are wonderfully immersed in is a wonderful reality, but not understanding that the inner dynamic of tradition is always to innovate, is a prison. And so the young composer and trumpeter chisels his uniquely beautiful, but definitely provocative body of work from out of the bedrock of the Afro-Cuban tradition – of son and danzón – only to shatter the pastiche of archetypal models.

What follows “Mariposita de Primavera” is works that suggest the profound evolution in tonality and traditional metres that (while they may) reappear in his work do so from a fascinatingly different viewpoint. It is one that is both revolutionary yet respecting of ancestral lineage, and in a style that seems to incorporate borderless influences as it is pushed to its limits, creating a compellingly atmospheric musical world redolent of shiny, metallic electronic keyboards, thundering drums shaped by Afro-Cuban percussive colouration; that is at once eerie and beautiful.

And so, by the time Mr Lescay’s extraordinary music climaxes (at the end of this recording) – though not before the masterful rap exhortations and the elegiac vocalastics of Zule Guerra on “Infant Eyes” and “Madre” – we catch his feverish drift. It is then that Mr Lescay’s creative trajectory reaches its final destination, dragging with it overt and subtle references to the traditional bedrock from which it has sprung; with decidedly Afro-Cuban flavour, but recontextualised in his inimitably personal manner and expressed in a complex rhythmic style in which (often) conflicting layers of tempi are used to drive the music pouring like liquid fire from his horn, fueled by the kindling of his keyboards and the rest of the instruments, as he drives the propulsive message of “Escape” forward.