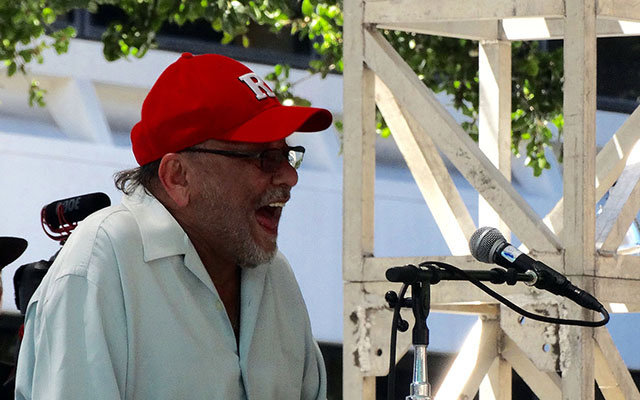 Live in Concert at the Kaiser Permanente Main Stage – #SJZSummerFest

I’ve been listening and dancing to Eddie Palmieri’s music for more years than I care to mention. My mother danced to his music at the Palladium Ballroom, and I was seduced by La Perfecta’s hard driving trombone sound (dubbed “trombanga”) during my teens.

Palmieri’s music dominates the East Coast airwaves, but he is no stranger to the West Coast or the San Jose Jazz Summer Fest. During the 60s he teamed up with the Swedish vibraphonist, Cal Tjader and recorded two trailblazing albums that have stood the test of time – El Sonido Nuevo/The New Sound (1966) and Bamboleate (1967).

And, though much of the audience at San Jose was either too young or oblivious to the historical nature of the music, Palmieri paid tribute to Tjader by opening the set with two tracks from the above-mentioned recordings, the fiery Picadillo and the haunting Samba de Los Sueños.

Palmieri took things up a notch with Crew (a tune he composed for his daughter), the jazziest tune of the bunch and destroyed the audience with an extended version of the Cuban comparsa, Camagueyanos y Habaneros, which evolved into a jam session of epic proportions and included surprise guests, percussionist Luisito Quintero and trombonist Doug Beavers.

At an age where some artists of his stature would be content to rest on their laurels, or even call it a day, Palmieri was as spirited and enthusiastic as ever. As I observed him going through his paces, surrounded by a cadre of young, gifted musicians, I got the distinct impression that there was nowhere else he would rather be.

Palmieri’s music moves beyond the stereotypical parameters of Latin Jazz and Salsa. It’s a musical bridge between his Puerto Rican heritage, Cuba and his be-bop influenced piano and no matter the mode, his music never fails to excite and get a crowd on its feet.

Palmieri recently released two new tracks: Vámonos Pa’l Monte, one of Palmieri’s most popular compositions, recorded in 1971 with his brother Charlie Palmieri, and this time rendered with a big band arrangement and Pa’ La Ocha Tambó, an underground hit and a staple in many Palmieri Live performances, was first recorded live in 1971 at the Sing Sing Penitentiary and was never recorded in a studio until now.

Yale Cultural historian, Robert Farris Thompson sums up the importance of Eddie Palmieri. “We’re talking about one of the great figures in American vernacular music, a multifaceted world-class musician who blends and zigzags between cultures, between the modern and the ancient, going past all boundaries.”