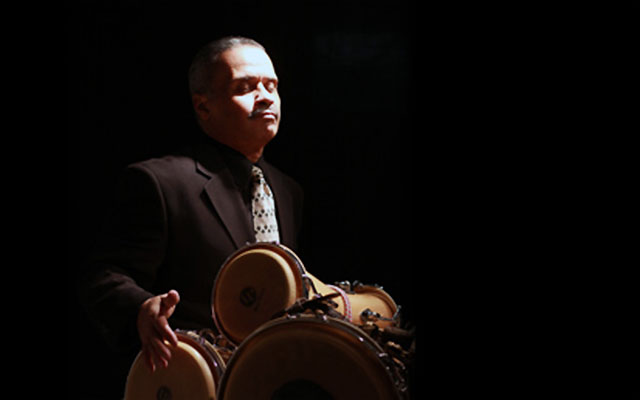 2009 GRAMMY NOMINEE Percussionist Wilson “Chembo” Corniel was born in Manhattan on November 22, 1953 of proud Puerto Rican parents and raised in the humble streets of Red Hook, Brooklyn. It was during these years as a quick-witted youngster that he had the privilege and honor to study with such luminaries of the Afro-Caribbean percussion tradition as, Tommy Lopez Sr., “Little Ray” Romero, Louie Bauzo, and Cachete Maldonado.

Chembo honed his skills at The Harbor Conservatory for the Performing Arts in New York and at the prestigious La Escuela Nacional de Arte in Havana, Cuba under the direction of the great Chucho Valdés. His intense studies with such legends noted above channeled his energy onto a path where Wilson “Chembo” Corniel has now created a reputation for himself among musicians and the public. Today, he is considered as one of the best hard-hitting, versatile percussionists around. Chembo teaches percussion to students at the SUNY Purchase Conservatory of Music and leads numerous clinics throughout the United States, bringing awareness of the rich Afro-Caribbean traditions to others. Among his credits, Chembo was chosen by Latin Percussion to create his own instructional DVD entitled An Introduction to Hand Percussion: Volume I – Congas. This DVD was released in December of 2000 with distribution by Warner Brothers and has been a success. He’s been a vital endorser of Latin Percussion instruments since 1982 as he is currently for Remo drum heads, Vic Firth sticks and Sabian cymbals. His touring credits are as long as his performing credits. Chembo has toured with many major artists throughout Europe, Asia, North & South America, and the Caribbean. Television credits include an appearance on the “Bill Cosby Show” and a recurring recording gig on Nickelodeon’s children show, “Dora the Explorer”. Chembo continues to perform and/or record with many artists of different genres. He is currently concentrating on leading his own Latin Jazz quintet, “Chembo & Grupo Chaworó”. Chembo received a GRAMMY NOMINATION by NARAS IN 2009 for “BEST LATIN JAZZ ALBUM” for his 2009 CD release entitled Things I Wanted To Do. This is a well-balanced Latin Jazz group that incorporates many rich traditions, such as writer Aurora Flores states: “a sprinkling of be-bop, a touch of swing with a dollop of bomba, rumba, tango and danzón topped with ‘un chin’ de charanga.”