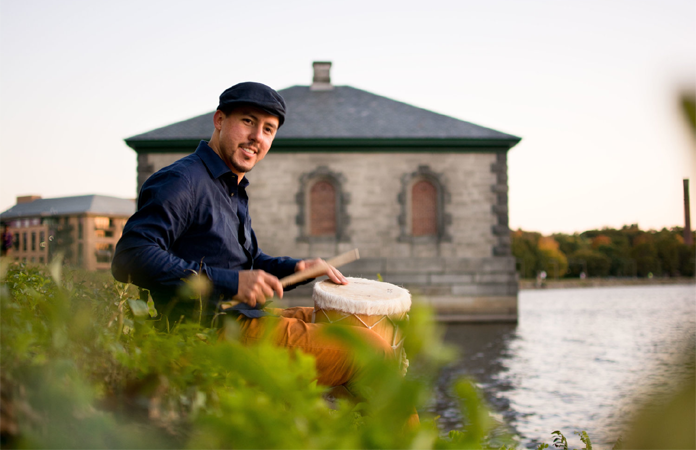 (Francisco) Fran Vielma is a Venezuelan multi-percussionist specializing in Venezuelan rhythms and drums. In addition to being an in demand performer, Fran is also a composer, arranger, and educator. In his compositions, he fuses Venezuelan rhythms with jazz elements and concert music. He has received multiple awards and honors, and his first album “Inesperado” was part of a catalog for the record label Cacao Music along with productions of international artists such as Horacio “El Negro” Hernández, José Luis Quintana “Changuito,” Bolivar Soloist, Orlando Poleo, and Negroni’s trio among others.

Vielma’s album Tendencias, with his Venezuelan Jazz Collective, features some of the most important Venezuelan and Latin American players of NY jazz scene like Luis Perdomo, Michael Rodriguez, Miguel Zenon, and Pablo Bencid. He also leads the ‘Venezuelan Jazz Orchestra,’ and is a producer/teacher of a biannual jazz seminar at The Andes University in his home country.

Fran Vielma holds a Master in Jazz Studies from New England Conservatory, and a Bachelor of Music from Berklee College of Music, two world-renowned music institutions. He is an adjunct faculty of the Music Department at Salem State University in MA, and an active member of Kamarata Jazz, a contemporary Cuban-Venezuelan jazz ensemble led by pianist Cesar Orozco.

Fran grew up in Mérida, Venezuela, a college town where arts and culture are part of the daily life of its citizens. Encouraged by his mother Maritza Vielma, a music lover, he started in the musical world singing and playing Venezuelan cuatro at The Andes University Arts Center. In 1999, Fran joined the “Youth Symphonic Orchestra – El Sistema” for three years in his hometown while he was also a member of the “Ensamble Kimbandú.” With the former, he made research trips around the country to study the afro-descendant music of Venezuela.

He attended the Arts University (UNEARTE), in Caracas-Venezuela to study composition, and at the same time joined the Caracas Free Percussion Cathedra directed by Miguel Urbina and Jhony Rudas. Later he transferred to Berklee College of Music in Boston-MA awarded by a scholarship, where he studied performance and jazz theory with David Johnson, Randy Feltz, Jackson Schultz, Jamey Haddad, Mark Walker, and Terry Lyne Carrington among others.

In the US, Fran Vielma has played with the Paul Winter Consort, Javier Limón, Luis Enrique, Eguie Castrillo, Occidental Gypsy, Mango Blue, NEC Jazz Ambassadors ’15, Alcides Rodriguez, and Cesar Orozco&Kamarata Jazz among others. He has taught and produced Venezuelan music clinics and seminars at Berklee College of Music, New England Conservatory, and also at Salem State University where he is currently an adjunct faculty of the Music Department.

Vielma earned a Master in Jazz Studies at NEC ’16 having Ken Schaphorst, Billy Hart, Gerry Bergonzi, Bob Moses, Joe Morris, and Brian Levy as some of his mentors.

The ‘Venezuelan Jazz Collective’ is an innovative jazz ensemble that comprises an outstanding cast of world-class musicians from Venezuela and Latin America based in the US. Their awareness of the jazz tradition, concert music, and an upbringing surrounded by the Caribbean and South American genres allow these performers to go from one idiom to the other with masterful spontaneity and musicianship.

Tendencias is the title of the debut album that includes nine original compositions by his leader Fran Vielma and one song by the laureate Venezuelan songwriter Simón Díaz. Vielma arranged these pieces bringing components of hard bop, free jazz, concert music, and showcasing rhythms from his native Venezuela in a contemporary fashion. Every composition references a place, an artist, a remembrance, and pays tribute to the Venezuelan cultists.