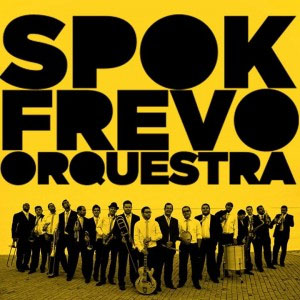 SpokFrevo Orquestra draws inspiration from frevo, a vibrant music of elaborated arrangements and deep roots. SpokFrevo takes the tradition to the centre stage, but does not renounce allegiance to freedom. It relies on what jazz is all about: improvisation. SpokFrevo Orquestra arose in 2003 from musical experiences that date back to the late nineties, leaded by the virtuous Inaldo Cavalcante de Albuquerque, Maestro Spok, who plays the part of saxophonist, arranger and musical director. Spok fronts a 16 musicians group, a real big band with saxophone, trumpet, trombone and rhythm sections, bass and guitar. These musicians engage in a crusade beyond aesthetic disputes. In the state of Pernambuco, Brazil, where centenary frevo got birth, carnival bonds constrict the genre to street festivals. SpokFrevo Orquestra takes frevo from its supporting role and presents it as the leading actor, shedding light on its original texture and complex playing technique. Based on musical excellence and speaking with propriety, they break patterns and reinvent tradition without subverting it. Spok’s boldness, although condemned by purists, is endorsed by many critics, who recognize his music as the harbinger of a new school. In an article for Jornal do Brasil (17/07/2009), Tárik de Souza writes that the time has come for frevo-jazz, pointing SpokFrevo as “a big band that has synthesized frevo and jazz in a blazing way”. In 2005, O Globo newspaper ranked SpokFrevo performance at TIM Festival as one of the ten best gigs of the year in Rio de Janeiro. In 2009, Passo de Anjo – Live was awarded the Prêmio da Música Brasileira (one of the most important in Brazilian music) as the best CD of instrumental music of the year, and the SpokFrevo was elected the best group in the same category.

SpokFrevo international career received a definite boost in 2008. The first large scale European tour proved the strength and the universality of its music. When in France, the Orchestra was invited to perform at the closing ceremony of the World Music Day (Fête de la Musique). It has played the final gig of the event at the Palais de l’Elysee, the official residence of President Nicolas Sarkozy, who attended the performance accompanied by First Lady Carla Bruni. Touring throughout France, Italy, Netherlands, Belgium, Denmark and Switzerland, SpokFrevo had a strong presence in the European circuit of summer festivals, presenting the frevo as a unique musical language, as well as properly introducing the genre into the jazz and world music scenes.