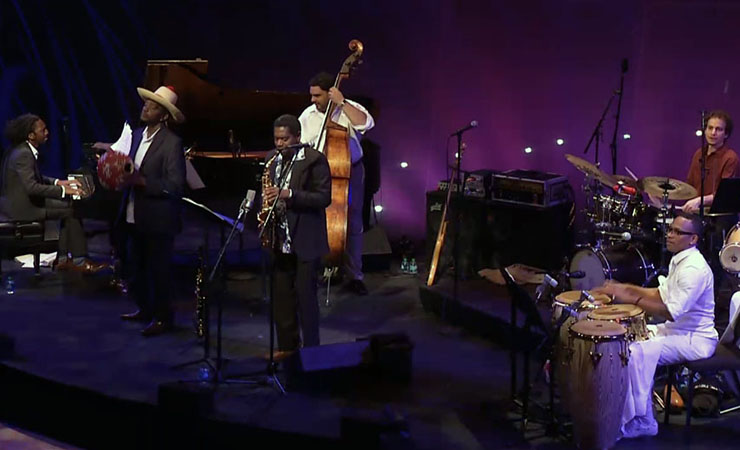 On the evenings of Friday, June 16 and Saturday, June 17, Cuban pianist, composer and bandleader Elio Villafranca hosted what he qualified as “an incredible performance at Jazz at Lincoln Center.” Heralded as “Nuevo Jazz Latino” the two-days concert taking place at the Appel Room, in the gorgeous installations of JALC (Jazz at Lincoln Center) in New York City, showcased an ensemble of bandleaders. The synopsis for the show read as follows: “On a program that may impel those of the opinion that 21st century jazz doesn’t concern itself with melodic values to question their assumptions, Nuevo Jazz Latino — convened under the auspices of Jazz at Lincoln Center’s new A Side, B Side Series — presents an all-star ensemble of a decidedly Afro-Cuban orientation, whose members have written new works specifically for this freshly-assembled collaboration. Songwriters include Jazz at Lincoln Center Orchestra bassist Carlos Henriquez, a Bronx native, and four brilliant Cubans: pianist Elio Villafranca, saxophonist Yosvany Terry, drummer (and MacArthur Award winner) Dafnis Prieto, and conguero-vocalist Pedrito Martinez.”

On the evening of Saturday, June 17, I had the pleasure of watching the live streaming of the show made available by JALC on its website. If it’s true that nothing replaces the experience of attending a live music concert, I’m convinced the closest you can get to it is through a webcast, an online feed transmitting the action as it is happening (and it could be in any place in the world). JALC does a commendable service providing this free option to Jazz lovers, no matter where they are around the globe, as long as they have high-speed internet connection. The result is truly professional, the use of multiple cameras and editing on the spot following the artists’ every move, provides a unique perspective of the performance, creating a remarkable experience for the online viewer.

Here are some excerpts of the program notes prepared by Ted Panken, which were also provided as a downloadable file on PDF format. The notes were enlightening and greatly informative.

“Saxophonist-chékere master Yosvany Terry, from Camagüey, pianist Elio Villafranca, from San Luis, and drummer Dafnis Prieto, from Santa Clara, familiar with the Eurocanon through intense conservatory training in their hometowns and in Havana, proudly acknowledge their intimacy and engagement with a broad array of kinetic folkloric and popular music from their respective regions. Conguero Pedrito Martinez, from Havana, accrued his griotic knowledge of West African oral traditions in the university of the streets. Carlos Henriquez, the bassist in the Jazz at Lincoln Center Orchestra since 2003, Bronx-born and of Puerto Rican descent, mastered the codes of Afro-Cuban tumbaos under the guidance of clave guru Andy González, and expanded his context with the likes of Gonzalo Rubalcaba, Danilo Pérez, Tito Puente, and Eddie Palmieri, prior to joining the Jazz at Lincoln Center Orchestra. A thoroughly 21st century musician, he renders “without an accent” the numerous dialects that comprise the playing field of jazz today.” —Ted Panken

“I think that the musicians coming from the Caribbean, Latin and South America, and Central America are changing the sound of jazz today by integrating their musical traditions with what is already on the scene. As much as I love Art Blakey, Bird, Sonny Rollins, Wayne Shorter, Branford Marsalis, and Steve Coleman, I also like all the traditions that are coming from Cuba. So I am going to have a different sensibility in approaching composition or playing the jazz traditions here.” —Yosvany Terry

“We came to America and embraced jazz because we love it. That means we have to fit in. For example, we hope that at some point we can speak the English language in a way that would sound like an American speaking. It’s the same thing musically. If you come here and play just Latin jazz or Cuban music, you’ll only be called to do one type of music, and you won’t have the opportunity to play with people you really admire—the jazz musicians you’ve heard on tapes and CDs. To be bilingual is a beautiful thing, because you can present music
in so many different ways.” —Elio Villafranca

One of my intentions for writing this post is to encourage music fans to participate on this kind of events that more and more are becoming available on the online world. A sign of the advances of the internet and a sample of the positive use we are making of new technology.

Our Co-editor, Tomas Peña was there, experiencing first-hand the concert. His account provides that excitement you get from a live concert, the enjoyment and incomparable recollection of a magnificent performance by five incredibly talented and dedicated practitioners of one of the greatest forms of artistic expression. That one we call Jazz.

“Nuevo Jazz Latino was one of the best performances I have seen this year. I applaud JALC for coming up with the concept of uniting a “dream” band and composing new material especially for the event. Performance wise, the repertoire was fresh and the musicianship was off the charts. The event brought back memories of the Jazz Gallery, where Dafnis and Yosvany experimented with new ideas and honed their skills. Even then it was apparent that these young, Cuban upstarts were going to shake things up and redefine jazz and Afro-Cuban music as we knew it. And, of course they did. Least we forget, each and every band member is a leader in his own right. In all, it was like watching the graduating class of 2014. Congratulations to the powers that be at JALC (Jazz at Lincoln Center) for recognizing the fact that this is music that deserves to be heard and making it available to the masses (via Live Stream). The performance was such a success that there is talk of a possible reunion and world tour. —Tomas Peña (jazzdelapena.com)

I was able to take some snapshots from the live feed, so you get to experience a little bit how it felt to be at Jazz at Lincoln Center that night. A very special guest joined the ensemble before the end of the show: Eladio “Don Pancho” Terry, the patriarch of the Terry family, a masterful violinist and percussionist, chékere player, member of the legendary charanga group Maravillas de Florida, from the town of Florida in Camagüey, Cuba. According to Tomas Peña “Don Pancho Terry, a veritable rhythm machine, was the icing on the cake.”

I almost didn’t log into Vimeo at 8 o’clock on Saturday night, March the 27th. It’s not that the programme...
Read more
Promotion