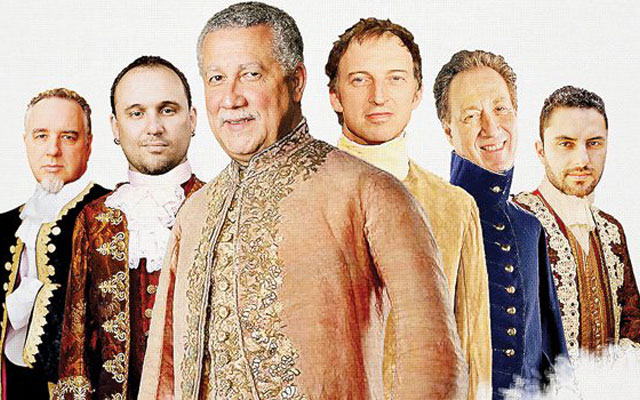 The concept of a collision between jazz and classical music is not new. The fantasy has been driving composers and performers as early as the turn of the 19th century. Classical music, moreover, has included the idea of improvised sections in pieces much before that. The celebrated cadenza in Bach’s Brandenburg Concerto No. 5 in D major, a soaring flight played traditionally on harpsichord comes immediately to mind. (Listen to Edith Picht-Axenfeld performing with the Berlin Philharmonic Orchestra conducted by Herbert von Karajan {Polydor, 1964/65} and you will hear what I mean). So in essence what Paquito D’Rivera has conceived here is not really new. Some adventurous South American musicians may have attempted this kind of bending of idioms and metaphors before as well. But far and away, no one has done it better than Paquito D’Rivera, not simply here on Jazz Meets The Classics but elsewhere whenever the idea grabs him. 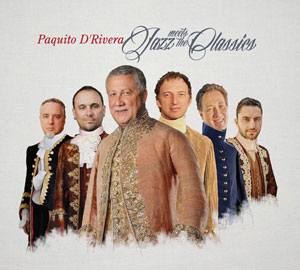 What a thrill to hear Chopin’s Fantasie Impromptu played not only by the prodigiously talented pianist Alex Brown, but also on clarinet by Paquito D’Rivera. It really is the kind of explosive start that every album, bar none, should have. Now Paquito D’Rivera did not actually arrange that piece and it is worth mentioning here that this exquisite arrangement is by Canada’s own musical genius, the pianist Hilario Durán. The rest of the extraordinary arrangements have been shared between Paquito D’Rivera, Alex Brown and pianist Pepe Rivero (who plays quite brilliantly on the last three selections), Mauricio Pinchi Cardozo and Oriente López respectively. Each of the arrangements – beautifully challenging in nature – are negotiated with memorable and masterful zip, given that tempi are accelerated and retarded as well as changed with maddening folkloric swing. This is the true charm of this classic recording.

The spirit of the original composers of these classics is never far from Paquito D’Rivera and his ensemble. However, even as the masters’ voice is so ingrained in each piece together with the sound of each country, the arrangements possess inimitable personalities with the performers emphasising folk inspiration from the Americas through flexible phrasing and subtle gradation of dynamics. Thus the performance is also an intense meeting of musical minds and it bears mention here that two of the musicians responsible for the character of these jazzed classics are the two percussionists – drummer Mark Walker and percussionist Arturo Stable. Mr Walker, to my mind is one of the finest all-round drummer (the other being Canada’s Mark Kelso) today, capable of playing in any idiom as if he were a local musician, and Arturo Stable has one of the greatest sensibilities for colour. Their time-keeping and inventive tempi are what make this recording so special.

As often as classics have been turned into another idiom, there are probably only a handful of albums like this one, where jazz meets classical music. As beloved and familiar as these classical pieces are it would be difficult to imagine better and more irreverent interpretations than these for their vibrancy. Paquito D’Rivera and this ensemble apply a special glow and penetrating urgency to each line in close alliance with the original composers. These players also epitomise cohesion and intimacy together with boundless excitement and energy.

Paquito D’Rivera defies categorization. The winner of thirteen GRAMMY Awards, he is celebrated both for his artistry in Latin jazz and his achievements as a classical composer. Born in Havana, Cuba, he performed at age 10 with the National Theater Orchestra, studied at the Havana Conservatory of Music and, at 17, became a featured soloist with the Cuban National Symphony. As a founding member of the Orquesta Cubana de Musica Moderna, he directed that group for two years, while at the same time playing both the clarinet and saxophone with the Cuban National Symphony Orchestra… Read more…