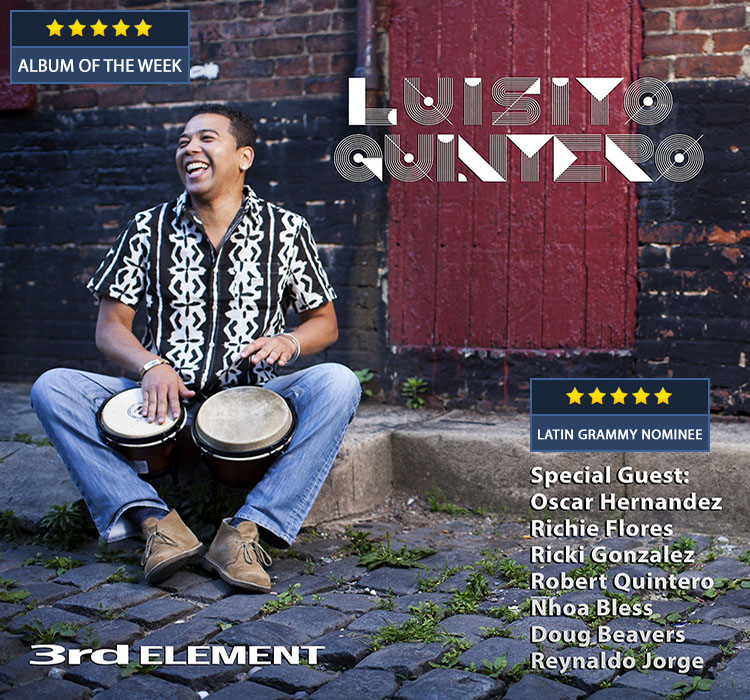 The incidence of percussionists playing music is far greater than musicians who happen to be percussionists. Luisito Quintero falls into the latter category. Luisito Quintero was born in Caracas, Venezuela, with music in his blood. He appears to have been surrounded by Afro-Venezuelan and Afro-Cuban rhythm and music. His father, Luis Quintero Sr., a respected percussionist in his native country, tutored and encouraged his young son to play timbales through his adolescent years. Luisito Quintero comes from a long line of outstanding musicians which includes his uncle, Carlos Nene Quintero and cousin Robert Quintero. Mr. Quintero studied at the respected Orquesta Sinfónica de Venezuela (The Symphonic Orchestra of Venezuela), and his percussion technique soon garnered attention from his colleagues. He has never been afraid to push the boundaries of his music melding popular idioms with Afro-Venezuelan and Afro-Cuban ones incorporating it all into a variety of percussion instruments: timbales, congas, bongos, drum set, the West African djembe and dundun, and a wide variety of other percussion instruments. Mr. Quintero brings all of this technical wizardry and musicality to his 2014 album 3rd Element, a self-effacing title that refers his role in an ensemble to a rhythmist or one performing the third element—rhythm—in music. In reality he is anything but that and in the first hearing of this Latin-Grammy nominated album his music literally leaps out of the blocks from the very first bars of “City View.” And from then on it is simply one musical explosion after the other.

This is not merely a rhythm-driven recording. It is richly adorned with soaring melodies and complex harmonies. And leading from the front is Luisito Quintero. This is a timbalero with a wonderful sense of song. And that means that his playing is informed by a melodic adventure that sounds as if he were almost singing on his timbales. The arrangements, some of which are made by Mr. Quintero, are rich and full of dramatic twists and turns. Not only is this showcased in the brass and woodwinds, but also in the uplifting battery of percussion. Mr. Quintero leads this from the front. His music is at its best when combined by the Afro-Cuban batá drums. But his playing on the other instruments he plays is also quite exquisite. Listen to how he holds his own on the exquisitely crafted “3rd Element,” a solo percussion piece that is distinctive with its tuneful musicality. Mr. Quintero’s tuned drums are characteristic of Latin percussion, but he makes the most of this distinguishing feature. In “Chacho” his drums and percussion combine superbly with bass and other rhythm instruments to herald a great wave of music that crashes through chorus after chorus of the song. “Metheny” is a superb fast and funky cha-cha-cha. “When There Were Four” makes full use of odd meters. This too is something that is featured on other charts. Mr. Quintero is very clever that way. He seems to be able to change rhythmic pulses at the drop of a hat. None of this is a surprise to the wonderful ensemble. They are so well heeled that the musicians appear to be prepared for any musical eventuality.

About Luisito Quintero: Luisito Quintero was born in Caracas, Venezuela, where he was surrounded by Afro-Venezuelan and Afro-Cuban rhythm and music. His father, a respected percussionist in his native country, tutored and encouraged Luisito on timbales through his adolescent years. Luisito comes from a long line of outstanding musicians which includes his uncle, Carlos Nene Quintero and cousin Robert Quintero. Luisito studied at the respected The Symphonic Orchestra of Venezuela, and his percussion technique soon garnered attention from his colleagues. He joined the popular music ensembles Grupo Guaco and Oscar D’Leon, where he enjoyed widespread worldwide exposure. Read more…