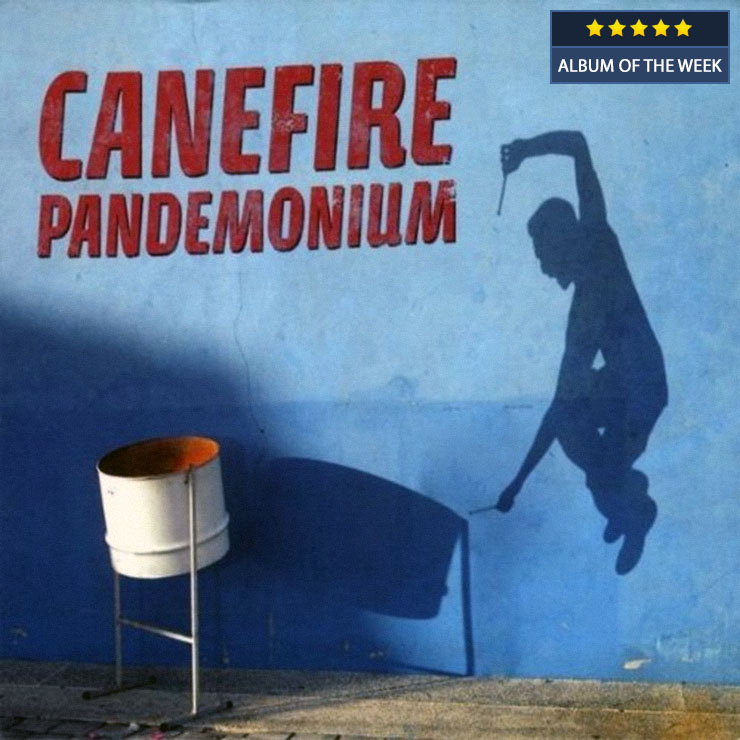 Musical ideas appear to come at the gifted Canadian musician and multi-instrumentalist Jeremy Ledbetter from many directions. These cannot always be described as “countries of origin,” but in some Cartesian or even Joycean way are several streams of consciousness that are alive at the same time, jostling for attention in what can only be described as a welcoming crowd. The mind of Charles Mingus was like that every day of his life and he acted upon it by creating music that featured the most abrupt yet amazing changes in rhythm that appeared to come out of nowhere. Sometimes Mr. Mingus said they came from God and he was only a vessel through which the music was channelled. Mr. Ledbetter says no such thing on his wonderful record, Pandemonium, produced and released sometime in 2010, but well worth talking about even today; it is that enduring. The title says it all—although it has also been conceived to suggest a pun on the “pan” in steel-pans that feature prominently in the percussive mix of CaneFire: the group that Mr. Ledbetter fronts. However, this title could just as well include the magnificent mayhem of Afro-Caribbean antecedents with Brasilian candomblé—Afro-Brasilian rhythms used to accompany the dances and songs of the Orixas (Gods) in a ritual, folk or artistic context—with choro and the further mayhem of the music of “El Brujo,” the great sorcerer, Hermeto Pascoal—Afro-Cuban music and a slew of other idioms from Europe, Africa and the Americas.

As serious and deserving of intellectual recognition as the music on this album is, it has its generous moments of sheer entertainment—even puckishness. “The Madman’s Jig” is a sensational opening to the album and for most of time that it lasts is one of the most refreshing charts on the album. But there is also the sublime virtuosity of pianist Jeremy Ledbetter and trumpeter Alexis Baró that remain the extraordinary feature of this music. And then there are the final bars which feature a short burst of the excellent drumming that is to come. Similarly “Trini To The Bone,” a vocal feature for David Rudder, who sings in delightful Trinidadian patois, which might be better understood in a city such as Toronto, but needs little explanation in the joyful nature of its lyric and melody. Here, despite the simple nature of Caribbean rhythms that run deep throughout the song, is a not-so-hidden melodic ingenuity and the beauty of the harmonies that swathe that melody. Some titles might sound somewhat trite, but there is always an inside joke to be had at the expense of some of the cultural anthropology surrounding this music. “Coconuts And Doubles” and “Nothing By Mouth” might seem at odds with the rest of the music when reading the list of titles, but extraordinary things happen when the steel pans and the array of other percussion kick in. On the subject of percussion, it is impossible to tell who brings more to the table—Rosendo “Chendy” León, or Mark Kelso. Both men have hidden rivers of Afro-Caribbean blood coursing through their veins. Mr. Kelso’s work is commendable as he is originally from Ireland, but just what a few years in the multicultural environment of Toronto can do to a person is heard in the astonishing ability of Mr. Kelso to embrace the polyrhythms of the African Diaspora that stretches from that continent to places as far removed as Cuba and Brasil. His fiery work performed with the huge arcs and circular motions of his powerful arms can be heard on “Baptism By Fire” and “The Fountain Of Youth.”

There are also some exciting surprises in the form of Mr. Ledbetter’s exquisite turn at stride piano in “Baptism Of Fire” and the fact that a large part of “The Fountain Of Youth” is dedicated to the sorcery of Hermeto Pascoal, who makes an appearance with his melodica and shows that there is also poetics in music performed through vocalastics involving gargling through a cup of water. And then there is the mesmerising vocals—the canto del namo—sung by Ramón Chipiaje on this chart as it begins and transitions into the wordless soaring lyric of Eliana Cuevas. On “Welcome Home” the mysterious and mystical drumming of the Brasilian candomblé (atabaque) drummer Gabi Guedes ensures that the music takes an absolutely magical turn. For sheer virtuosity there is Charlie Parker’s “Donna Lee” featured here with an Afro-Caribbean twist. All this gives credence to the fact that this is more than just a beautiful album: More than anything else it is one that is, quite simply, one of the most memorable records to come out of Canada in a long time. The fact that it still sounds fresh and full of surprise years after its initial release is a testament to the enduring nature of its music and for this there is Jeremy Ledbetter to thank effusively.

Track Listing: The Madman’s Jig; Cocoa Payol; Two Cousins; Baptism By Fire; The Fountain Of Youth; Trini To The Bone; Coconuts And Doubles; Welcome Home; Little Bell; Nothing By Mouth; Donna Lee (Goes South); If I Could Sing.

Previous articleStill, the New Work of the Brilliant John Funkhouser
Next articleClotilde Rullaud: In Extremis