A couple of weeks after receiving a well deserved homage by the Puerto Rico Senate, I sat down with Puerto Rican guitar legend and personal idol, Jorge Laboy.

Wilbert Sostre: Let’s talk about your beginnings in music.

Jorge Laboy: My father played guitar and also sold guitars, so there were always guitars at home. And since I was a little kid I took the guitar and tried to play. I remember when I was six, my father wanted to buy me a guitar. When I was ten we used to go to the mountains to play Puerto Rico traditional parrandas and aguinaldos. That’s the way I started to learn how to play guitar. Those were my first steps in music. Then came the Woodstock movie, that movie made a great impression on me. All those incredible musicians, Jimi Hendrix, Carlos Santana, Ron Wood, Alvin Lee. I think that’s why I am  a musician. Right then I fell in love with the guitar, and started to play the electric guitar.

WS: Like lots of musicians, especially guitar players from those years from the Rock tradition. So how you got into Jazz?

JL: It was my brother Paco who also was a guitarist and played with a group called Guayacán, a folk music trio but with a modern sound, two guitars, an acoustic bass and great arrangements. My brother listened to jazz, and he was the first to introduce me to jazz music. He used to bring me Joe Pass records. I was still in High School back then.

WS: So you started early in Jazz?

JL: Well, just listening, because I didn’t understand it and had no idea how to play it.

WS: You were still listening and playing mostly rock?

JL: Yes, definitely. My favorites were Jeff Beck, the first Yes records, Jimi Hendrix, Led Zeppelin, Eric Clapton, Santana. All that 70’s decade that was spectacular musically. Each musician had a very distinctive sound and personality.

WS: Do you remember your first jazz album? 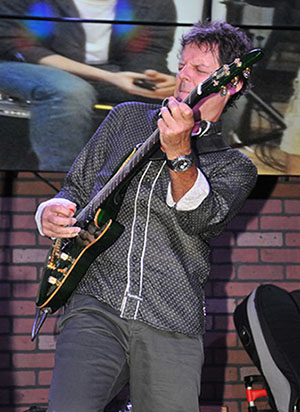 JL: The first jazz album that caught my attention was Joe Pass Virtuoso. I listened to that guy playing those solos and said “that’s impossible”. And I listened to it a lot. But I didn’t even get close to try to play like that, cause I had no idea what was going on there.

Then I went to the University of Puerto Rico to study music. There I studied classical guitar. Those were the years of Nueva Trova. Groups like Haciendo Punto en Otro Son, Roy Brown, El Topo. I worked with José Nogueras and created a group called Casábe, also in that Nueva Trova style. Then we created a group called Trapiche, it was a Nueva Trova group but with a progressive sound, with jazz and rock influences. There I started working with different progressions, a little bit more complex stuff. Those musicians from Trapiche were the ones that accompanied singer Danny Rivera. When Danny Rivera guitarist couldn’t play one day, they called me. That’s when I started playing with pop artists like Chucho Avellanet, Lissette, Lucecita, Yolandita, Wilkins, Lourdes Robles, Cuco Peña, Glenn Monroig and in Nydia Caro TV show. That’s what I’ve done mostly in my career.

Specially my time with Glenn Monroig  was a great school for me, cause he was doing music with lots of harmonies and changes.

In the 80’s I started listening to more jazz. The jazz of those years, a little bit more simple, more mainstream, more funky, more melodies and easier to listen.

JL: Right, groups like Spyro Gyra, Lee Ritenour, Dave Grusin, Larry Carlton, Robben Ford. That’s when I started playing jazz. But I don’t consider myself a jazz musician. I never studied jazz formally, I studied it by myself. What I am, not by choice but just by circumstances, is a versatile player. Cause  I play different styles, rock, folk, pop, nueva trova, jazz and even classical.

WS: On your album Guitarra Sin Fronteras you prove how versatile you are as a player, there’s fusion, jazz and even a Latin touch. The piece “Barranquitas” is one of my favorites.

JL: It’s curious, that piece I wrote it because that “tumbao” at the beginning I used to play it every year with my family when we visited Barranquitas. My father is from Barranquitas. One day I decided to write something with that tumbao, that’s why it’s called Barranquitas.

WS: There’s also a piece in your album Guitarra sin Fronteras that has a classical feel.

JL: Yes, “Panocho”. Panocho is a little town in México, Michaucán. It’s a town that lives mostly out of the people that makes guitars. That is all you see around the town, people making guitars. I bought a good one there, and that night at the hotel I wrote that piece.

WS: Let’s go back to your first Jazz influences.

JL: Larry Carlton 335 was another record that caught my attention, because it had the distortion and attitude of Rock music but the progressions were different and I like that. I also like Robben Ford and Scott Henderson. From the traditional jazz I like Wes Montgomery and Pat Martino. From the more modern ones I like Pat Metheny. 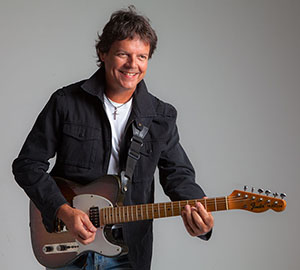 WS: Some of those musicians from the 70’s and 80’s like Larry Carlton, Bob James, were studio musicians for other artists.

JL: Right, they were session musicians. They played for others, for TV series, movies. And that’s very similar to what I’ve done. Nowadays young musicians in Puerto Rico have more opportunities to play live. In those days the venues were limited, to maybe just hotels.

WS: When did you start to play live with your Jazz group?

JL: 1988, when my first record came out. After that, Heineken started a series of live shows called Heineken Jazz Jams Sessions Nights, on alternate Thursdays at the Caribe Hilton Hotel. I was the musical director. There were special guests like Danilo Pérez, David Sánchez, Giovanni Hidalgo, Juancito Torres, Dave Valentín, Paquito D’Rivera. That’s where I got more into Jazz and studying more the Jazz language.

WS: Can we talk about your guitars and effects?

JL: I have 35 guitars, also a Puerto Rican Cuatro, a Cuatro from Venezuela, a Charango, a Tiple, a Mandolin and a Banjo. The guitars I use the most are the Stratocaster types, an original 1969, a Tyler Classic, a Tom Anderson Classic and a 1967 Telecaster, Epiphone made in Japan by Gibson Les Paul, a PRS Hollowbody and a ESP I made in Japan. ESP sponsors me. The ones I use depends on the style and mood. Almost always I play the Strats for Pop and Rock, the same with the Telecaster and Les Paul for power chords and rock solos. Different guitars make me play in different ways.

For amplifiers, a Two Rock Custom reverb that has a clean sound, a Custom Audio PT-100 a versatile amplifier for recordings, a Dr. Z Mazz 18 that I use mostly for Pop music, and a Bruno Cowtipper that has a clean, big sound. For effects, an RC Booster, Hermida Zen Drive, Fetto Overdrive, Suhr Riot, Nova Delay AYA, and Xotic Compressors. EP Booster, Ibanez Keeley modded TS-9 overdrive, a Dunlop Wah Wah. It also varies with the style I’m playing at the moment.

WS: And which ones you use for playing Jazz?

JL: The Telecaster and the ESP Custom mostly for my music. With those I use a TS-9 Overdrive, EP Booster, Riot Distortion and a Boss DD5 Delay. That’s mostly for playing live. If it is a more pure Jazz sound, I play a 1966 Gibson Johnny Smith or a 1968 Gibson ES175.

WS: Plans for the future?

JL: I’ve been working as a music Professor for one and a half year at the Inter American University. That’s something new and I’m also working on a new album.

The 2014 edition of the Heineken Jazz Festival was a mix of music palettes starting with a familiar face to...
Read
CD Reviews

Lisa Engelken is a fearless, versatile singer as she demonstrates once again on her new release, Little Warrior. Her song...
Read
CD Reviews

As a follow up to our Carib album review we present a Q&A with David Sánchez expanding on some topics...
Read more
Promotion