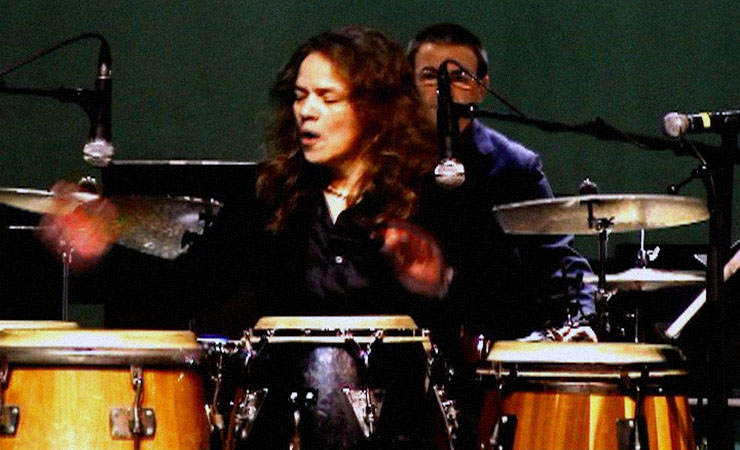 Annette A. Aguilar (multi-percussionist, recording artist, producer and bandleader) was born in San Francisco into a family from Nicaragua. She began playing music at the age of eleven.

By the age of 16 she was sitting in and performing with renowned Latin artists: Santana, Cal Tjader and Pete and Sheila Escovedo (Sheila E). She earned a Bachelors in music performance from San Francisco State University, Master from Manhattan School of Music, and Master in music education at CUNY. She has worked on Grammy award winning Broadway shows and symphony orchestras (she is the principal timpanist for the Bronx Symphony). She has toured and shared the stage with Darlene Love, The Four Tops, Stevie Wonder, Tito Puente, Dave Valentin, The Grateful Dead, Mose Allison, Toshi Reagon, Casselberry-Dupree, and many top New York City Pop, Jazz and Latin groups.

In 1992, she formed her Latin and Brazilian jazz group, Annette A. Aguilar & StringBeans. Their debut CD was Special Friends, released in 1999, followed by No Cheap Dates in 2005.  Both records were produced on her own label (Eagle seeks Salmon), which have received numerous outstanding reviews nationally, and aboard. StringBeans released their third CD The Day Waits for Nobody in 2009 just in time for their performance at the prestigious Kennedy Center in Washington D.C.

She has been selected three times as Latin Jazz Ambassadors in 2003 and 2006 for the U.S State Department, the Kennedy Center and Jazz @Lincoln Center. They toured Southern Africa and Rwanda, Ethiopia, Kenya, Tanzania, and Madagascar (Where she performed for President Ravalomanana).

In January of last year, 2020, I had the opportunity to travel to Havana with my colleague, the renowned writer...
Read
CD Reviews

Isla del Encanto, Borinquen, Puerto Rico, small in dimension, but has given the world a host of exceptional artists. Among...
Read
News

Cubadisco is the most important international fair of the Cuban music recording industry. Each year is dedicated to a country...
Read