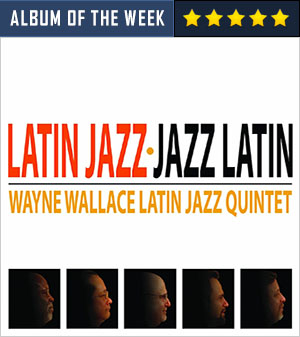 For the Latin jazz scene it is a pleasure to have a new piece from the brilliant composer and musician Wayne Wallace. This time around the five-time Grammy Award nominee brings us Latin Jazz/Jazz Latin, a powerful and tremendous ten-themed album where he showcases his incredible knowledge and his great playing, composing and arranging. Trombonist and composer Wayne Wallace revamps traditional Cuban and Caribbean sounds with modern arrangements rooted in the most pure Latin jazz tradition. Who else than him to bring together the music of American and Caribbean communities together with an album that displays harmonic creativity, wonderful improvisation and Latin feeling.

The album starts with Wallace’s composition “¡A ti te gusta!” (You Love It), the perfect theme to transport the listener into a great tropical musical experience. The flute and violin play the melody from the beginning in this track, providing a catchy sound which introduces the band and begins the game of improvisation with a syncopated and rhythmical background full of tumbao and technique. In the descarga part of this song, there is an absolutely gorgeous dialog between the flute and the violin accompanied by an incredible percussion interpretation. In this album Wayne Wallace explores the richness of the Afro-Cuban landscape giving the flute and violins a protagonist role in melodies and solos.

Latin Jazz/Jazz Latin is the mixture of experience and young talent represented, for example, by the participation of the young flutist Elena Pinderhughes and the established Pete Escovedo. For this project Mr. Wallace continues working with his quintet. Great musicians,  pianist Murray Low, bassist David Belove, percussionist Michael Spiro and  drummer Colin Douglas, who filled the void left by the wonderful Paul Van Wageningen.

The idea of giving the flute and violin a protagonist role came from a commission to write a chamber jazz piece that Mr. Wallace received from San Francisco’s De Young Museum and Intersection for the Arts. In that work he decided to bring the flute to the foreground and the reaction of the audience said it all. So he insisted on working with the flute and the violin, releasing, some time later, Latin Jazz/Jazz Latin.

This album is the result, not only of the talent, knowledge and commitment Mr. Wallace has about jazz music, but also his trips to Cuba, Colombia, Venezuela, and Peru among others which placed him in another musical world and culture. Latin Jazz/Jazz Latin has six original songs composed by Mr. Wallace and four jazz standards transformed into new rhythmical pieces that combine blues sonorities with the Afro-Cuban and Puerto Rican beat.

Wayne Wallace and his band are a great project that enhance and respect not only the music of the Caribbean but also the syncopated music of the world.