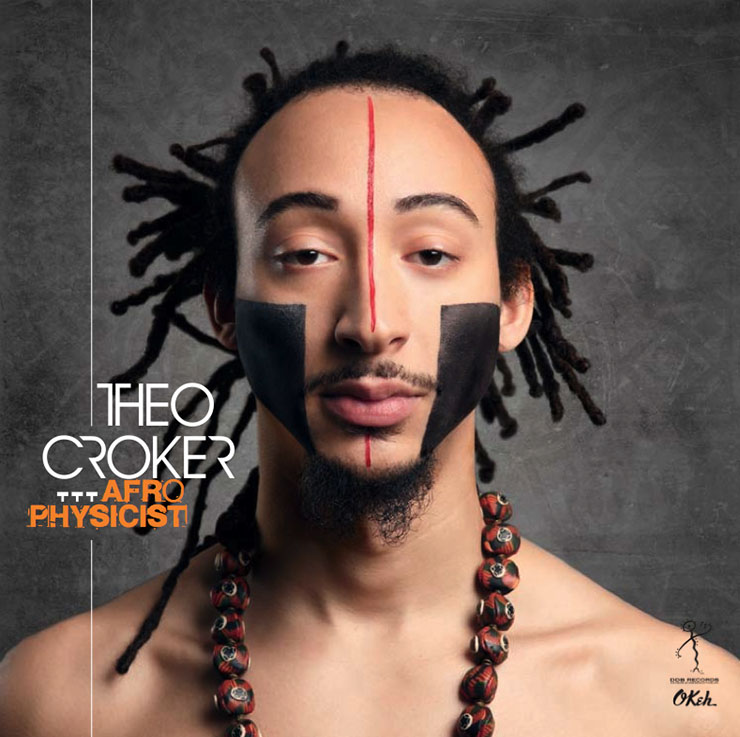 Theo Croker is the epitome of the sound of surprise. He comes suddenly from behind and sideways – never from the front – seizing heart and mind like an excited friend who shutting the eyes, begging a “Guess who?” And he asks, “Am I a jazzist, a bluesist, or a rhythm & blues horn player?” The answer is never obvious. As the pondering begins, he reveals himself “I am Theo Croker. I am all of those things rolled into Dark Funk.” And then he plays. His elegantly piercing tone textures ring in the ears, informed by great New Orleans trumpet masters – Louis Armstrong and Mr. Croker’s own grandfather, Doc Cheatham. And Mr.Croker also has the sparkling tonal wit of an impetuous young man as well as the deep erudition of an old one. His timbre is sometimes sharp – even harsh – and at other times husky – even whisper soft. He is, quite simply a brilliant young musician.

Dee Dee Bridgewater has produced Afro Physicist. A very wise decision on her part. On “Alpha for Doc,” it is possible to first see why. His notes are anguished and long to begin with; then short and searing, elliptical, like arcs of fire. He continues in this fashion, later in the album. as well, increasing the length of his short bursts and his long lines seem to become interminable. They also bounce wickedly like a bicycle with oblong wheels.

He speaks and sings through his horn. And when the horn combines with a piano, or a Fender Rhodes, it is like being in a Holy Rollin’ AME church. His hallelujahs resound ever so brightly. It is then time to rise up with the congregation with shouts and exultations. Then drums rumble like thunder on “It’s not you, It’s me (but you didn’t help),” is just one such track and it is time to be transported to the great migration of a herd of wild elephants deep in Africa. Suddenly he is sensuous, soft and muted – almost sexy on “Save your Love.” Of course the producer, now reincarnated back to being a vocalist – Ms. Bridgewater – helps because she taunts him with her hurting voice. And he is more than up to the task of egging her on. Like a lover’s quarrel, the argument and the music devolves.

This performance continues by the wordless vocalastics of Stefon Harris’ vibraphone, locks in a musical dance with Mr. Croker’s horn. Trumpeter Roy Hargrove makes an exquisite and surprisingly bluesy turn as a vocalist on “Roy Allan.” Bassist Michael Bowie, keyboardist Sullivan Fortner, the indomitable Kareem Riggans (on drums) and a stellar cast including the incomparable Ms. Bridgewater (on three songs) star on this musical excursion. All of them to a man (and a woman) combine to make this a memorable album with the soaring trumpet of Theo Croker.

If, as Shakespeare wrote in Twelfth Night, “…Some are born great, some achieve greatness, and some have greatness thrust upon them…” Then, Theo Croker fits into two out of three of the Bard’s categories. His talent is innate; he inherited a unique gift from his grandfather, the legendary trumpet player Doc Cheatham. But, Theo is also an achiever. This is one young musician who is not afraid of greatness, or the hard work and dedication it takes to get there.

Theo Croker was born and raised in Leesburg, in central Florida, on July 18, 1985. Leesburg was not exactly a hotbed of music, and Theo wasn’t exactly born with a horn in his hand. He first picked one up at the age of eleven, after a visit to New York City where he heard his grandfather play at Sweet Basil. (Doc Cheatham died the following year, at 92, in 1997.) Theo continued to listen to Doc’s recordings. “He had a very appealing sound, the strength behind it was always a melody,” Theo says. Read more…