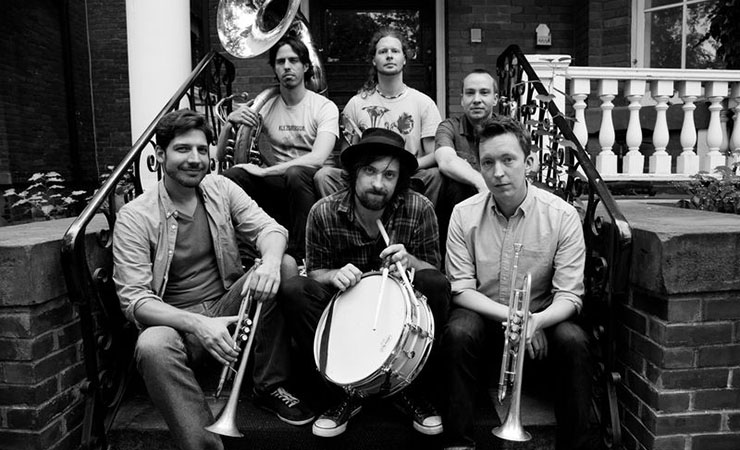 The Heavyweights Brass Band (HBB) may seem to have taken a leaf out of the playbook of that other, more famous ensemble—the woodwinds ensemble, the World Saxophone Quartet, but this sometime quintet, and now, sextet is far from a copycat. If anything the singular voices of trumpeter Jon Challoner, trumpeter John Pittman, trombonist Chris Butcher, sousaphone player Rob Teehan and drummer Lowell Whitty are uniquely Canadian, which is to say, self-effacing yet with musical intellects that are ingenious and sometimes even brilliant. The sextet play music that is microtonal, exciting, daubed with a myriad shades of blues that is, in turn, driven by pathos, wit and ultimately resonates with ebullience. Moreover the music is eminently accessible, sexy and for these reasons should have caught on a long time ago. True, the ensemble is popular, but in Toronto musical art—any art—pales in comparison to sport and the perennially failing Toronto Maple Leafs hockey team receives infinitely more money and attention than music ensembles that are as good as the Heavyweights Brass Band.

Musically speaking the HBB composes considerable charts that seem to suit the beauty and delightful whimsy of their musical bravura. Tones and colours weave in and out as brass and the lone woodwind, and percussion as if a musical tapestry is coming to life. It is a magical process and exciting as well, to see the musical narrative unfold, especially the warp of the brass is intersected by the weft of woodwind and drums until the music reaches its final dénouement. Only extraordinary compositions, together with superb, contrapuntal arrangements, played by superior virtuosos makes this happen. Almost as good is when the music of others—the covers, which are usually, on their two albums—receives similarly superb arrangements played with resident virtuosity. It only serves to reinforce the excellence, intellect and technical mastery of instruments played by the band. The rap-like strut, “Nueva Orleans, and Michael Jackson’s classic “Beat It,” from the band’s first album and the brooding compositions “Misterioso” and “St. James Infirmary Blues,” from the second album are cases in point. 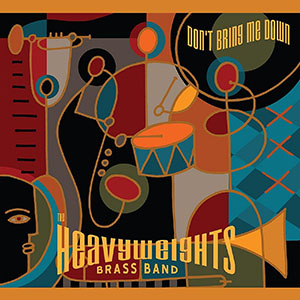 Here on Don’t Bring Me Down the Heavyweights can be seen to be wetting their toes, and heard to be finding a definitive sound. Still there is a certain maturity that begins to emerge as the music progress in the end. There is also an irresistible and infectious ebullience that turns and twists each of the songs into musical engines that seem to run on nitroglycerine. This does not mean that they are gone in 60 seconds, in a manner of speaking, with too many notes being played, but even in thoughtfully slow movements of the music there is bounce, a kind of dancing beauty that informs the music.

Each of the musicians display much instrumental technique, but none is overbearing as many instrumentalists are these days. Music phraseology is taut and there is an abundance of ideas flowing here. As a debut album the album goes beyond the pale; each of the musicians push the envelope far and wide. There is never a dearth of things to say and songs to be “sung.” Charts such as “Why Can’t We Be Friends” and the song Beyoncé made famous, “Single Ladies” are superbly played and the Heavyweights make these charts their own. While the contribution of each musician is exemplary, Rob Teehan on sousaphone stands out. It is a joy to hear the easy manner in which he manipulates the lugubrious instrument, coaxing not only breathtaking rhythms, but also in the invention and facility that he brings to every solo. However it is a group effort in the end. Each of the instrumentalists are virtuoso players and ideas abound and flow every time an instrument is played

Track List: Why Can’t We Be Friends; City Dreams; Baby; Nueva Orleans; Just The Two Of Us; Speaking My Language; Rock Me; The Plunge; Single Ladies; Heavyweight Don’t Bring Me Down; Beat It; Sexy Time; Bad Romance. 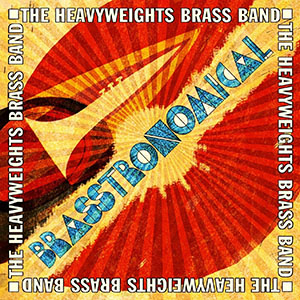 Brasstronomical is a sophisticated album, featuring the kind of intellectualism emerging from the former hi-jinks of a young band that has found its voice for good. The music is infinitely more bronzed and played with cultured and erudite, and burnished elegance. The Heavyweights are in fine fettle and more self-assured. Importantly the somewhat rudimentary drumming of the first album has more ideas a great deal more urbane rhythmic invention. Also, somehow, the drums of Lowell Whitty seem to employ more percussion colouration than they do on the debut album. In a sense Mr. Whitty plays a somewhat starring role here.

Once again, this is not to say that trumpeters Jon Challoner and John Pittman, trombonist Chris Butcher, sousaphone player Rob Teehan make lesser contributions. Singling each of these stellar players for loads of praise here is easy. And there are several magnificent contributions from each on charts such as the bluesy strut, “Booze Hounds,” that also features the big and gravely voice of Jay Douglas, the exquisite cover of the R & B hit “I Believe I can Fly,” “Misterioso,” featuring the eminent conguero, Giovanni Hidalgo and the great Canadian soprano saxophonist, Jane Bunnett, whose angular and sliding solo pays tribute to the ingenuity of the band, as well as to Steve Lacy and Thelonious Monk; enough to make the album truly “Brasstronomical.” And then there is the most magnificent chart on the album, “St. James Infirmary Blues,” a chart played with raw emotion in the manner in which it is paced and in the mighty indigo colourings of the instrumentation.

This is an ensemble to watch for all Canadians and the nit-picking Americans as well. Its players are all ingenious musicians in their own right and their music is headed to stellar regions where all good to great musical art performances go sooner or later.