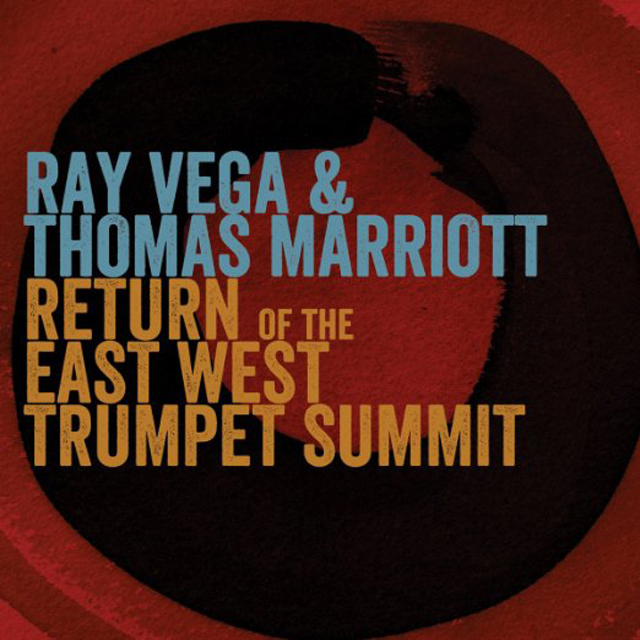 Frank Foster, in his autobiography tells of the time when he was invited on stage to play, at a time when he thought he was the bee’s knees. He soon found out that Gene Ammons was also on stage with him and it didn’t take Foster to find out who the real ‘boss’ was. That ‘cutting’ contest taught him a real lesson, not only in humility, but also in musicianship. The two trumpets on Return Of The East West Trumpet Summit are not in it to win it, but the friendly ‘rivalry’ if you can call it that at all, produces some stunning music. As each horn man – Ray Vega and Thomas Marriott – solo on the music here, you are treated not simply to notes, phrases and lines, but bolts of lightning. Let your mind wander for a second and you could miss a masterful figure by Vega or Marriott. That’s how riveting the music is.

It is an unusual record when you cut to the chase. One is accustomed to hearing an ensemble where the bassist is replaced by a Hammond B3 as a guitar trio and you can ‘blame’ the mighty Joey DeFrancesco for that. But on this recording organ and drums are bolstered not by a guitar (another rhythmic instrument filling in for a melodic one) but by two trumpets (or a flugelhorn). This in itself is a leap into the unknown for both Vega and Marriott. Their last ‘Summit’ featured a bassist after all. However, we are not talking about someone on Hammond B3; it’s George Colligan of whom we speak. Colligan is a fresh voice on keyboards. His music pierces the air with the same electric charge that Vega’s and Marriott’s does. In fact you could almost say that this is Colligan’s record as much as it is the trumpeters’. The thunderbolts, however, are all Ray Vega and Thomas Marriott.

Ray Vega is one of the finest voices on the planet. It should not take a gleaming gem such as ‘Quasimodo’ on this disc to tell us so, but the manner of his playing is a timely reminder. Every time I hear Vega, I feel that his imagination and inventiveness aren’t widely enough celebrated. His playing here and everywhere else is marvellously intense and his vocalist-like phrasing reveals his great bloodline that at the same time shows a deep connection with the ancestors of his instrument, going back to the ghosts of geniuses past. Vega on mute brings a fine sense of hushed expressiveness to Charlie Parker’s song. His minor-tinged ending is so lingeringly evocative that I could have foregone any music – even on this album – for his playing on this song alone.

Thomas Marriott is no slouch on trumpet. His playing is crisp, incisive and graceful all at once. You can sense a warm glow in the room around your speakers when Marriott plays. His magnificent turn on Erroll Garner’s classic ‘Misty’ has elements of drama, wit and vitality. Marriott rightly reads this piece as a progress from relative darkness to light and as he negotiates the piece the sudden illumination is gripping. The classic, slow movement of the piece is full of elemental magic, and surprises too. On Wayne Shorter’s ‘United’ Thomas Marriott’s playing packs a mighty punch with superb glissandos. ‘Firm Roots’ is equally insightful, with brilliantly translucent textures and incisive rhythms.

And spare a kind thought for Matt Jorgensen. Here is a musician whose playing in this disc is utterly compelling and driven. The kinetic rhythmic energy throughout this performance would not be the same without his masterful playing and that of George Colligan’s which opens up a whole new world of amazing dynamic tension.

Track List: The Egyptian; Totem Pole; Misty; United; Firm Roots; The Bourgeoloo (aka At The Summit); Quasimodo; What Is This Thing Called Love.