Phill Fest: That’s What She Says 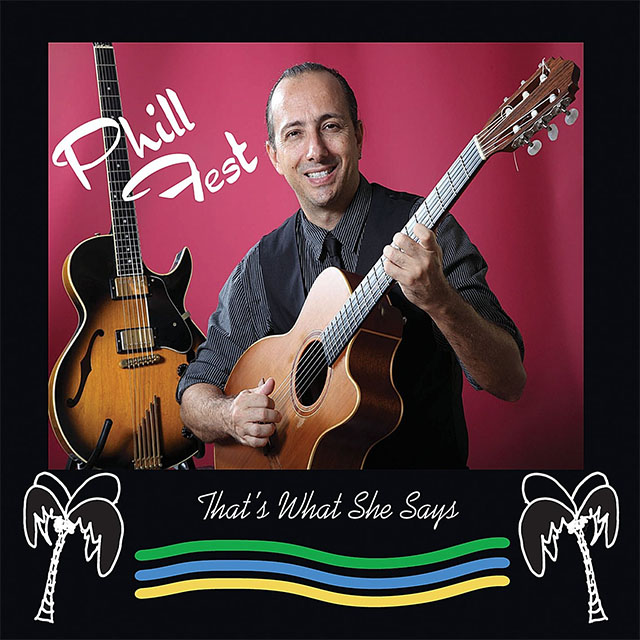 The rhythmic intricacies of Brasilian music are just one aspect of that metaphor. Then there is that beautiful concept of a feeling called alegria. One cannot exist without the other. The point I am trying to make here is that if you don’t have both then you cannot play Brasilian music and if you cannot feel both you cannot feel the music of Brasil. Phill Fest not only has both, but he also “feels” both in his soul and this is why his disc That’s What She Says resonates not only with the intellect, but with the heart as well. Phill Fest also has heritage. His father Manfredo Fest, a musician, who led the band Bossa Rio and who opened for Sergio Mendes and Brasil ’66 for three years made sure that Phill Fest heard the music he was playing and, more importantly, listened with his heart. And it does not take you too long to feel this—right from the opening bars of “Meu Pai” a heartfelt tribute to Manfredo Fest. This song sets the pace and mood for almost everything that follows. From here on, the music moves from one danceable song to another.

Phill Fest’s take on the lineage of the Brasilian cool and spacey guitar is less than conventional here, seeing him summoning warm tones and voice-like smears, which float benignly over the sound of his strings that, in turn, adds a rich and not entirely predictable melodic and harmonic foundation to the music. There are ample examples to suggest that Phill Fest has scaled great heights—the pinnacle, so to speak—of his musical powers. And even if there are greater heights to be scaled, this album will have given the guitarist ample reason to be proud of his achievement. “That’s What She Says” is a joyous, dancing piece which engages you, body and soul. Heitor Villa-Lobos’ “Choro No. 1” is a slower, slightly mysterious ballad edged with a slightly rueful feel. This features a thoughtful melodic solo by the guitarist as does “Estamos Ai”. Of course, “Meu Pai”, “Frajola” and “Estamos Ai” are made so much more memorable because of the exquisite soloing and all-round melodic playing by Hendrik Meurkens. However, none of this should preclude mention here of the rest of the ensemble—especially the pianist Robert Prester, who appears to be at the height of his pianistic powers. And you could not possibly expect a better and more appropriately explosive close to the album than “Tchau For Now” a brilliant little vehicle for percussionists Andy and Jack Potter.

It’s time to sit up and take notice of whatever comes your way from this guitarist. Phill Fest may be wetting his toes as far as composing and arranging his music. But it will not be long before we can expect to find a majestic new album from the guitarist. If my wish is fulfilled, this would have a big band fronted by this extraordinary guitarist and musician with an unusually spelt name: Phill Fest.