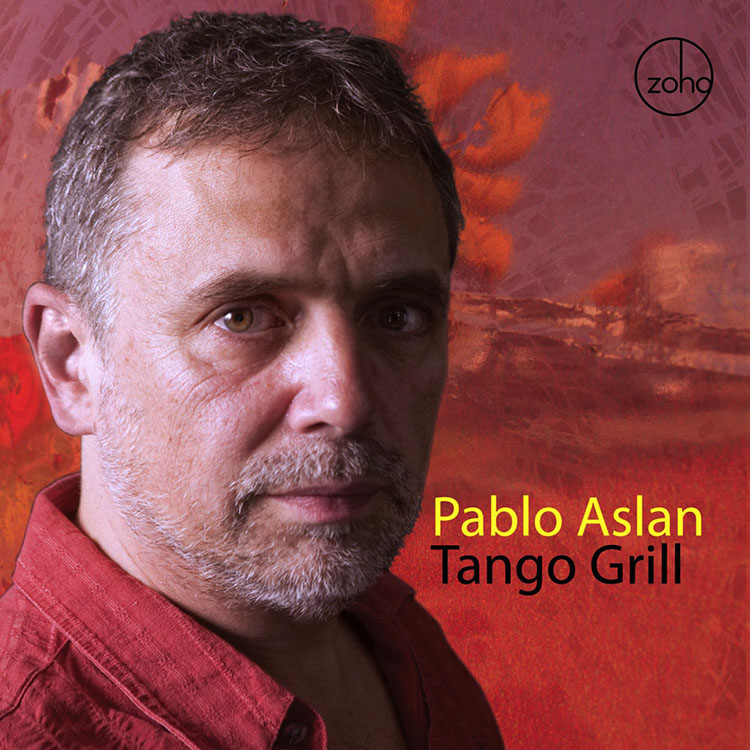 To the unsuspecting ear, Pablo Aslan may sometimes appear to be just a fabulous bassist, with sublime technique and a virtuoso of limitless possibility. But dig a little deeper, especially into this album, Tango Grill and the impossible will seem to appear. Aslan takes the relatively rigid structure of the written music and dance form, the Tango, into a stratospheric space where no one else has ever dared to venture. At least this is not since Astor Piazzolla reinvented the form as Nuevo Tango, over 60 years ago. To be precise, Aslan is taking the Tango, a form of music that is played as written into the realm of the idiom of Jazz, a music that is as elastic as an improviser can be. This is where Tango Grill purports to fit in: like playing tocar a la parrilla, without written arrangements, on the grill.

And what a spectacular program Aslan presents here, together with the masterful bandoneon playing of Nestor Marconi, but especially the trumpet of Gustavo Bergalli and the percussion inventions of Daniel Piazzolla, Astor Piazzolla’s son. The musical challenge was immense: Take eleven classic tangos and reinvent them with the feeling of jazz. Aslan presents these swirling pieces as wonderful dancing, pirouetting spectacles that appear before the mind’s eye as they sweep across gleaming floors with just the swish of dark gowns and leather brushing against the invisible wax. Pablo Aslan recreates this classic setting with sublime playing arco con brio. His ability to create the fire of the music at one time, and then dampen it with murky suggestions of elemental dark sadness and loneliness is unparalleled. Although Aslan appears never to stray from the melodies, in fact he turns these pieces into miniature vignettes in the stellar regions of jazz.

The 1920s classic, “El Amanecer,” for instance conjures aural recollections of early Third Stream as the bassist and bandoneonist dance around each other with graceful counterpoint. “Viejo Smocking,” although reverently read is actually quite avant, with a singing bass and harmonic lines from trumpeter, Gustavo Bergalli, who is spectacular throughout the program. By the time “La Trampera” comes around the ensemble breaks the mould completely, with a wonderful, staccato solo from percussionist Piazolla that breaks down the rhythm for the rest of the ensemble. Aslan then brings proceedings to a spectacular close.

Although there are many defining moments on the album, it is “La Trampera” that presents the sojourn in all its glory as the group led by a bassist and musician of singular vision and ability takes the Tango to the outer reaches of possibility. Tango Grill is a rare and memorable album played flawlessly by a bassist destined for great things in 21st Century music.