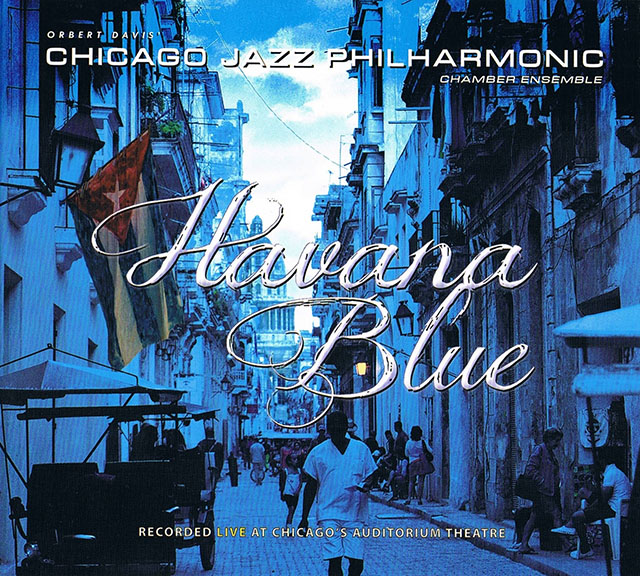 Orbert Davis’ reputation relies not only on his abilities as a composer. He is, in fact, best known as the orchestral leader and founding conductor of the Chicago Jazz Philharmonic,  and that shows his mettle as a formidable conductor and virtuoso in these deeply-felt compositions which share much. The added Jobim piece, complete with its jazz inflections might also be regarded as an ideal coupling for the ambitious suite, Havana Blue Suite which also gives this outstanding album its title.

What is so remarkable about Orbert Davis as a soloist is not just his technical assurance, his flawless intonation over the widest range, tonal and dynamic, but his natural feeling for Latin-Jazz warmly expressed in the larger format – played in the ‘third stream’ as Gunther Schuller once called Jazz music with classical expressions, in this case by the mighty Chicago Jazz Philharmonic Chamber Ensemble. Havana Blue Suite, written for CJP (as it is known in abbreviated form) emerges more than ever as the most romantic of Davis’ works, gloriously melodic yet with a bite of intensity in the characteristically jazzy passages, here played not just by Davis but the distinguished group of musicians who form the CJP.

Reeds and woodwinds, brass and strings show a natural sympathy for the Cuban idiom, both in the lyrical and jazzily syncopated writing. Their slinky rubato emboldened by the clave of the African-Caribbean musical diaspora, through the seven movements of the ’Havana Blue Suite’ is a delight. It is Davis’ expressiveness that exactly matches that of his performers. It is a measure of the richness of Orbert Davis’ invention that each luscious theme arrives with miraculous rhythm is never repeated, but stated in subtly different metre.

I suspect that the richness of lyricism in this work makes a direct impression on the rest of the repertoire for the CJP is equally warm and expressive in ‘Chega de Saudade’, ‘Manteca’ and ‘Seraphim’; the last piece, ‘Orlando’s Walk’ is an expansion of the final movement of the suite. Despite playing music that relies heavily on clave rhythm, the music is never rushed; it just keeps on ticking even as the violinists, violists and cellist luxuriate in the relaxed tempo. Each soloist – when called upon to step into the spotlight – has no trouble coping with the intensity of the writing and rounds off his/her performance with a delightfully pointed pay-off.

Orbert Davis has a characteristic manner of expression in his compositions and arrangements and is celebrated for his way with hushed work that grows in a climactic manner that so emphasises the elegiac quality of his work. The recorded sound is excellent with good balance between soloist and chamber ensemble with ample detail and a bloom on the sound that helps to co-ordinate the most complex textures without muddying the result. Altogether a resounding success, making one hope for more recordings from the same source.