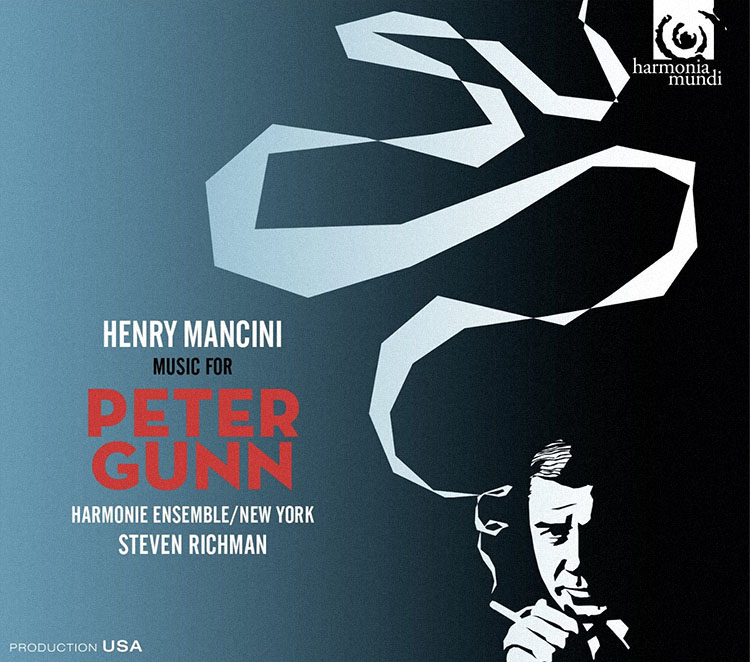 As I jazz lover it will always be a pleasure and a privilege to write about Henry Mancini´s music, the ingenious composer and arranger who shook the world with his fascinating scores for television and his tremendous passion for music. This time, Mancini´s music is played by the Harmonie Ensemble New York and the Grammy-nominated conductor Steven Richman. Under the label Harmonia Mundi, this band and Mr. Richman released the album Music for Peter Gunn.

This memorable score, written by Henry Mancini, was the musical background for the classic TV detective series, Peter Gunn, which aired from 1958 to 1961. His precious musical lines and explosive improvisation can be recalled more than the show itself. The West coast cool jazz style was the inspiration to create and produce a soundtrack that amazed thousands of listeners around the world.

Jazz legends like Charles Mingus, Ellington, George Russell and Billy Strayhorn played the same arrangements and inserted their own style. Now Harmonie Ensemble New York and Steven Richman bring us another interpretation of the famous score showing us their talent for expressing the musical words of Mr. Mancini. The band and its conductor keep the essence of Henry Mancini´s timeless compositions and arrangements, making it sound vigorous, sparkling and profound as it did more than 5 decades ago.

Music for Peter Gunn is the twelfth album recorded by Mr. Richman and the Harmonie Ensemble/New York; it contains sixteen songs including “Peter Gunn Theme”, “Sorta Blue”, and “Dreamville” among others. With this album, listeners can appreciate Mr. Richman’s fine skills as he connects his ideas about playing and his musicians expertise to assemble a great jazzy sound. What is really fascinating about the conductor of this project is that he was a French horn player before he decided to devote his life to conducting. Being an instrumentalist, he had the opportunity to play with Henry Mancini several times which gave him a personal experience about the sound of this icon of composition.

The sound of this album reflects the quality and professionalism of this orchestra and its conductor. Mr. Richman has conducted this great band in eleven internationally acclaimed recordings, including The Two Nutcracker Suites, Gershwin by Grofé (Harmonia Mundi), Sketches of Spain (Sheffield Lab), Grofé & Gershwin Symphonic Jazz (Bridge Records); as well as the Grammy award-nominated Stravinsky Histoire du Soldat, Rarities and Premieres (Koch International Classics) just to mention a few.

This talented conductor has also been Music Associate for the United Nations Day Concerts, and director and conductor of the international Dvorák Day Concerts. Who else but Steve Richman (who performed with Henry Mancini on Broadway and at the Lincoln Center in New York) to revive and disseminate Mancini´s music, keeping the jazzy, vibrant and colorful sound of this all time jazz legend.