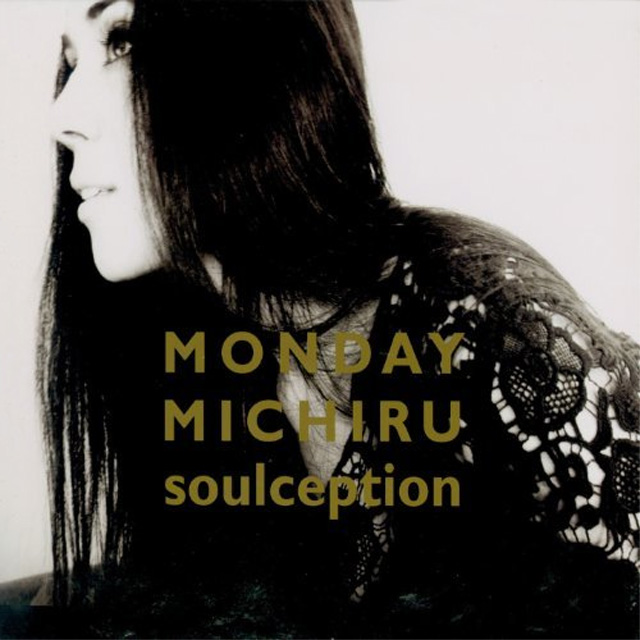 At a time when music is in a state of flux mostly as a result of the virtual collision of idioms and metaphors it is joy to hear the voice of Monday Michiru. Her spectacular musicality absorbs the explosive shock of this collision and turns it into something of such immense beauty that it is sometimes hard to breath while listening to her vocal gymnastics. On Soulception the essence of Michiru’s art is reinforced. She is a musician whose voice is elusive as a sunbird, as nervy and sinewy as leaping cat and yet as moist and fragile as an Amazonian creature in a Japanese water color. But she sings in a blur of all of those creatures that knows no boundaries, can be in all places at once as she bends and twists her vocalastics into a style that cannot be categorized because it is so spectacularly singular it eludes the proverbial finger that stabs at it.

On this album, Michiru dives into her soul—the soul—with no safety net. This means her skin is the only protection against what she will discover. Such a mission can only, then, result in merciless exposure to the elements of the soul, which for all who seek its secrets, is almost always a free-falling adventure. Along the way, Michiru also discovers both caresses and barbs. Armed with the pristine and nude beauty of her voice, the singer uncovers the hurt and joy of her expedition in such beautiful missives as “Adventures” and “The Elusive Song” both of which are heat-seeking missiles that are fired into the depths of Michiru’s own soul. That she is able to maintain her composure as she bares it all is remarkable and speaks volumes for her maturity as an artist. Michiru’s expedition is made more memorable as she remains stoic as she vocalizes with soaring purity through the serpentine depths of “What Is In A Soul” and, as she emerges from there, into the rarefied atmosphere of “What Defines You”. Both are, in dramatically different ways, love songs that add volumes to the literature of music. Much of this has to do not only with the beauty of Michiru’s voice, but also with the magnificent guitar work of Adam Rogers, whose supple playing is, quite simply, out of this world.

Monday Michiru is an artist not only of singular talent, but also of immense pedigree. The daughter of the wonderful pianist Toshiko Akiyoshi and (step-daughter) of flutist and saxophonist Lew Tabakin, Michiru is like the musical vine of an old and still-blossoming tree. Her maturation occurred long before this album. The musicality probably coursed through her veins as a precocious child, long before she undertook this sojourn. This is why she was so ready to plunge into the soul; why she was so ready for Soulception long before she recorded it. This is what makes the album so precious and breathtaking to listen to, time and again.

Tracks: Soulception Interlude; Adventures; What Is In A Soul; Bridges; Native Tongue; Over And Over; Map Of The Soul; The Elusive Song; Brasilianos; ‘Til Morning Comes Again; What Defines You.