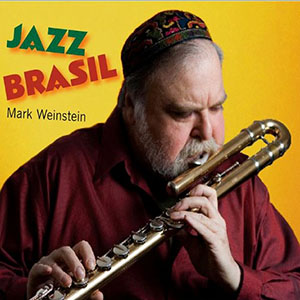 Mark Weinstein has quietly established himself as one of the most wildly inventive flutists in modern memory. He is also one of the finest virtuoso players in the entire spectrum of 20th and 21st century music. His only rivals may well be the late Eric Dolphy, the Canadians, Jane Bunnett and Bill McBirnie, and of course the great James Galway. Weinstein is radically different from Dolphy, who imparted a speech-like quality to his flute inspiring the mighty John Coltrane in the bargain and radically expanding the vocabulary of that instrument. Weinstein, on the other hand prefers to stay within the confines of the almost classical language of the instrument, but like the others mentioned, makes soaring leaps and swoops from the stratosphere and into the oceanic depths of music, bringing a renewed elasticity to the alto and bass flutes as well as the concert flute. (Although his astounding album, Tales from the Earth, (Ota Records, 2009), with the pianist, Omar Sosa, however might suggest that he now resides closer to Dolphy in the extremely creative improvisations).

Weinstein has also been steady in his output in recent years, with four albums in as many years, but more than quantity, the consistency of his form has been quite impressive. Jazz Brasil, however, must surely rank as one of his finest albums to date. It is radically different from his album with Omar Sosa; more like the earlier Jazzheads album, Lua e Sol (2008), which also paid tribute to the Brasilian milieu. Jazz Brasil is not as thematically connected as the former Brasilian album. The latter has a greater sense of urgency and seeks to unite two great traditions by melding the jazz swing of delight with the shuffle of samba. His reading of the classic Ary Barroso song, “Brazil” is a case in point. Rather than play this chart like wave upon wave of thundering rhythm (as Maria Bethania once did, for instance), Weinstein drops the song into a trance-like Bossa Nova groove, with the master bassist, Nilson Matta chugging along with a steady shuffle and swing. Likewise, his interpretations of Antonio Carlos Jobim’s “Triste” and “If You Ever Came to Me” are magnificently linear re-imaginings of Brasilian standards, crafted, no doubt, with Matta in tow.

The bassist had a leading hand in this album. His joyous playing also raises the level of excitement exponentially. Matta is positively buoyant on his own compositions, employing great leaps, covering multiple octaves on the bass with unbridled technical virtuosity. His double stops on “Brazil” are breathtaking. Pianist Kenny Barron must surely be an inspired choice for the musical journey. The ingenuity of this decision is borne out on the two Thelonious Monk charts played here: “I Mean You” and “Ruby My Dear”. While Weinstein skips and pirouettes his way through the songs, Barron plays perfect foil, as he recreates the charts in singular fashion. Drummer Marcello Pelliteri not only completes the quartet, but leaves an indelible mark on this unforgettable album.

Mark Weinstein on the web: jazzfluteweinstein.com