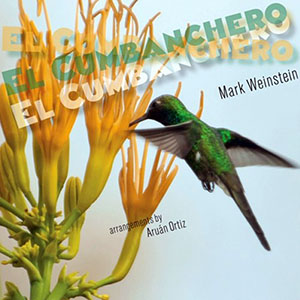 It might seem foolhardy to many to take a chance and make an entire record based on “charanga”; perceived as rather old-fashioned too considering the rising eminence of the goldmine of what is now salsa—a common misnomer for all things Afro-Cuban. But not for flute maestro, Mark Weinstein, who, four years ago in a great leap of faith—literally—made, with Omar Sosa, Tales From The Earth a record that raised the spirit of the Holocaust and indeed the spirit of all who perished in the hatred of racism (Ota, 2009). That was certainly a lot more risqué and unfashionable compared to this record; still, however, the fact is that Weinstein will not shy away from taking a chance on almost anything. Another fact about the flutist—borne out yet again on this record—is that he has the uncanny knack of finding the finest musical associates to collaborate with on projects. A case in point: the monstrously talented Cuban born pianist, Aruán Ortiz, who has not only played magnificently on this record, but who has also contributed the most exquisite and authentic “charanga” arrangements on this album.

The album literally explodes from the gates with an up-tempo version of “El Cumbanchero,” not only a title track, but a torch song for an era of music and dance that is all but forgotten about Cuba, a country that is bristles with an almost magical musical heritage. The record also pulsates with the undying heart of a classic “charanga” ensemble. There is the virtuoso artistry of flutist, Weinstein at the helm of affairs; but his art is also elevated by two magnificent string, bass and rhythm sections. The first is one consisting of violinists Francisco Salazar and Everhard Parades, cellist, Brian Sanders and on all but one of this ensemble’s tracks, the conguero, Yusnier Sánchez Bustamante. Not only does this ensemble bristle with energy and kinetics on “El Cumbanchero,” but it also shocks the body into involuntary dancing on “La Mulata Rumbera” and Sindo Garay’s classic “Perla Marina”.

The second ensemble comprises violinist Marc Szammer and Elena Rojas Crocker; plus virtuoso cellist Aristides Rivas. This group, together with Weinstein and Ortiz is responsible for the sublime work on the reverential “Doña Olga” as well as “Armoniosos de Amalia,” “Danzón de Liz” and the wistful “Contigo en la Distancia”. The two originals from the pen of Ortiz, “; Aruancó” and the frisky “Av. Pintor Tapiro” are played by just Weinstein, Ortiz and the majestic rhythm section including master percussionist Mauricio Herrera on conga, timbales and guiro and the remarkably melodic bassist, Yunior Terry. Aristides Rivas joins the quartet on Ortiz’s “Av. Pintor Tapiro”.

Despite the seemingly traditional setup, Weinstein and Ortiz ring in the changes on almost every chart, breaking free of the formality and rigidity of the programmatic “charanga” charts. The harmonics for the charts flow in new and diaphanous; almost swooning waves of emotion. There is an almost visual element to the flexibility of the bodies of the dancers were these to be present during the recording. As it is the couples pirouetting sensuously in figures of eight are almost conjured up on this record of beauty and utter memorability. But although this aspect of artistry is nothing new for both Mark Weinstein and Aruán Ortiz, it must nevertheless be praised for its splendor.