Déjame Así is a rich, syncopated and moving production, full of taste and talent. Any one song you pick on this CD is enough to show the magic of the essence of Latin syncopated music. 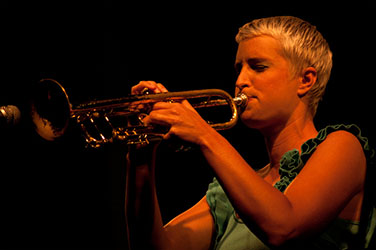 This album was fully produced by Juancho Valencia, the creative director of the band Puerto Candelaria, and has as a special guest, the unrivaled salsa singer Oscar D’León.

This CD is as marvelous as Maite’s musical story. Mrs Hontelé was born in Utrecht, a city in the centre of Holland, surrounded by the sound of salsa because her father listened to Fania, Fruko y sus Tesos and Sonora Ponceña among others. The little Maite, at 9, got her first trumpet and some years later she started playing salsa, defining her vocation for the rest of her life. She went to Rotterdam Conservatory and had the opportunity to study jazz, flamenco, Brazilian music, and, of course, salsa. Her love for Latin music has taken her to many countries, allowing her to play with legendary bands like Buenavista Social Club.

Maite has recorded two albums: Llegó la Mona (The Blonde one came) and Mujer Sonora (Sonorous Blonde) where she expresses the passion of the Latin beat her father, years ago, had showed her back home. Déjame Así is another station in this rhythmical and enchanting route she set off on to explore the landscape of her musical heart and soul.

It was a challenging project to record in four countries. Colombia was her headquarters, in Merlin Studios, accompanied by her sound engineer Gabriel Vallejo. In Spain, Alain Pérez recorded the babybass and the voice for the song “Qué Bonito” (What a Beautiful). In Austria, Carlitos Irarragorri recorded the tres cubano for the same theme and, in Venezuela, the sonero of Venezuela, Oscar D’ León, sang the bolero “Perdón” (Sorry).

This 8-song album is made up of a great dream team of tropical musicians who display rhythm, clave, tropic, power and unique Colombian sound. “Tu Rumberito Llegó” is a perfect example of the incredible point Maite’s band is able to reach; it starts with an intro of powerful African drums, including soft bell sounds and introduces Maite’s trumpet with a merengue beat. This merengue theme gets richer and subtlety more complex, at times, resembling a salsa song, adding more percussion lines, backing vocals, and improvisation.

I can express my enchantment with each of the songs that compose this musical project. For example the dialog between Maite’s interpretation and D’León’s mastery in “Perdón”, or the connection between the lines of the violin and Maite’s sound in “Mañana”, but as usual in reviews, this short writing is only a subtle provocation to explore the feeling of this amazing woman who came to make us feel happier and purer.