Kenny Garrett – Pushing the World Away 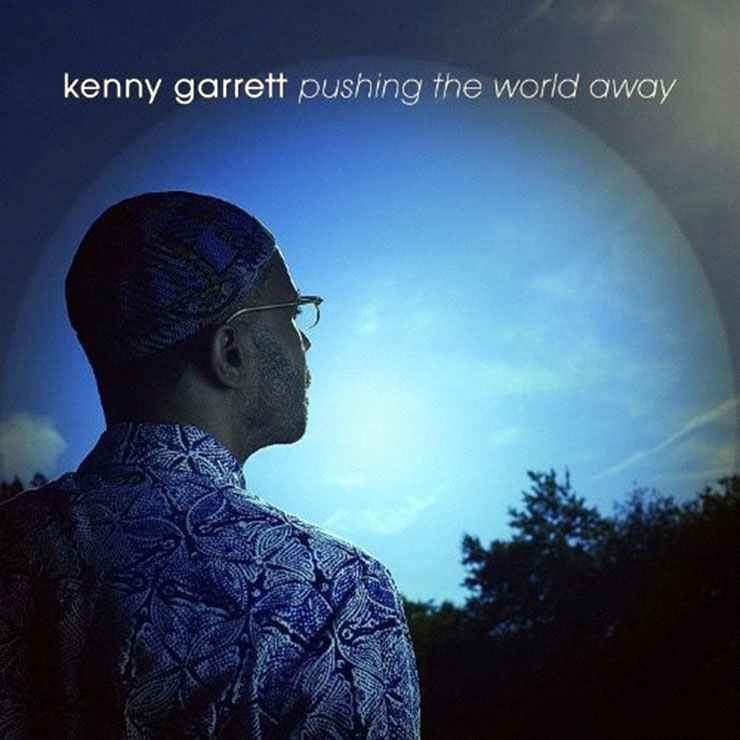 The late trumpeters Freddie Hubbard and Woody Shaw must have had instincts about Kenny Garrett when they hired him to be the other lead voice in their respective bands decades ago. He had, after all proved himself in the Duke Ellington Orchestra earlier. His work today is of a far different quality however. A sinewy, yet exquisitely lyrical performer on both alto and soprano saxophones, Mr. Garrett’s playing is informed by an exuberance and angularity that is pure joy to the inner ear. He “sings” from the depths of his soul, “dances with mind and heart” as if impelled by every string of beautiful radiant notes he plays. He plays in lines skip and swing like the svelte steps and complex pirouettes of the Hines brothers and Savion Glover, when they are/were on song. Though he might play in the high register often, his playing might be compared to the penitent howling at the heavens, begging—with hot gospel breath—for divine mercy. This he must receive swiftly as his song soon turns to pure joy; the joy experienced by one within a hair’s breadth of the Divine. Kenny Garrett is also a player so deeply informed by history and tradition that he is able to move the music he so loves with an elasticity that propels it ever forward.

Mr. Garrett’s album, Pushing the World Away is a leap forward from its magnificent predecessor, Seeds from the Underground. It continues his reflective musical journey, though not in the same subterranean, but in an equally other-worldly fashion. His music is not spectral, but Kenny Garrett can commune with the world of the fourth and fifth dimensions. In his playing on this album, pain is heard along with melancholia and longing in an all-too vivid fashion; but so also is joy and celebration. His homage to Chucho Valdés takes the form of a rollicking mambo—“Chucho’s Mambo”—in which he also shows a firm grasp of the swagger and back beat of the Latin idiom; and in his homage to that tenor titan, Sonny Rollins on “J’ouvert” he displays an altogether beautiful grasp of all things African-Caribbean. On both charts, Mr. Garrett has the benefit of the pianist Benito González, a towering player with ample “con tumbao” that he can not only act as an alternate voice for the saxophonist to bounce his ideas off, but seems to be able to act as a proverbial gateway for the whole rhythm section. But Mr. González does not do so alone. He is aided and abetted by a rising star on the bass, the magnificent Corcoran Holt, who seems to be popping up in several places these days. Mr. González and Mr. Holt are two of the musicians upon whom Kenny Garrett relies for the entirety of his magnificent record. While Benito González shares the roster with another fine pianist, Vernell Brown, it is Corcoran Holt who holds up the low harmonic chair of the bass with a gravitas and erudition that is well beyond his years.

Kenny Garrett is not only a revelation on the faster-paced charts, including one shout-out to a friend and fellow-Grammy Award winner, Chick Corea, but he also plays especially beautifully in slower tempi. His ruminative voice on “I Say a Little Prayer” and “Pushing the World Away” is breathtaking. However, it is his wondrous turn on piano in another dedicatory piece to his friend and co-producer, Donald Brown—“Brother Brown” that steals the show, not only compositionally but also in terms of technique, expression and virtuosity. In the utter beauty of his performance Kenny Garrett may be encouraged to write for and play piano more frequently in the future. His stellar turn on that grand instrument is unspeakably good and just as worthy of every plaudit that has been showered on his playing alto and soprano saxophone. If only Freddie Hubbard and Woody Shaw were alive today to see and hear how far, and with how much beauty their protégé has developed as a musician—both instrumentalist and composer—and thus as a human being in the troubled world of today.