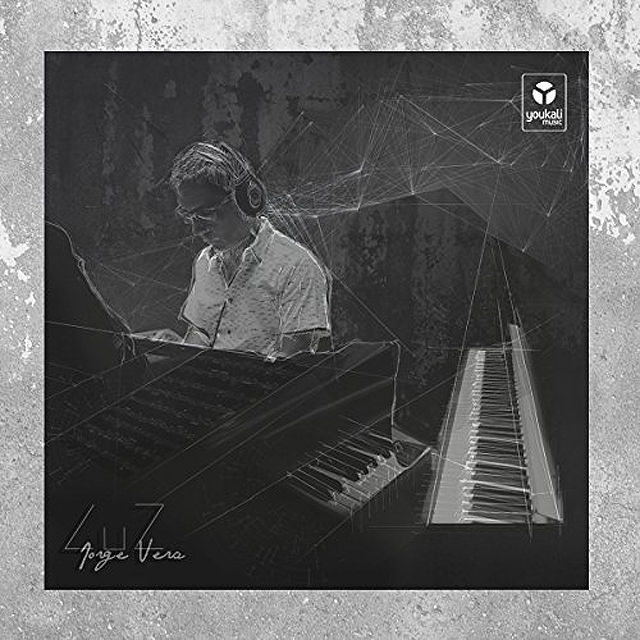 Following his immersion into a very unique ocean of sound with Groovera, Jorge Vera returns to the studio with mostly his own material for Youkali Music, recording Luz, a, tantalising project made on a gorgeously tuned piano. It was well worth the wait for those of us who know his work and a wonderful surprise for others who don’t. The Chilean pianist, Jorge Vera is arguably one of the finest young pianists residing in Spain, and perhaps even Europe. Anyone who has heard the pianist will testify to his outstanding virtuosity and intellect. A musician’s musician, if ever there was one. On this remarkable disc featuring two bassists including the almighty Christian Gálvez together with drummer and producer Shayan Fathi, Vera has crafted a disc that would make you want to dance down the street with, handing out copies to complete strangers.

Throughout this performance Jorge Vera combines a haloed sound with a sense of drama and an unerring instinct for pacing. He has the intellectual acumen of Chano Dominguez, without the angularity and inflections of folk forms of the master from Cádiz. This is not to say that Vera’s dancing music is not passionately Latin-Jazz. On the contrary, his spine tingling virtuoso playing draws from an equally vivid palette. The shadowy opening on “Luz” is a miracle of colouring combined with a sure narrative sense, as if it possessed a poetic text as the music grows in visceral turbulence. Time and again you marvel at the confidence and sureness, combined with the finesse and musicality that he always displays. It’s the kind of, in fact, where comparisons have ceased to matter. Naturally, Jorge Vera has the veracity to stand out on his own. Few can match him in his momentous drive as evidenced by his extraordinary performance on “Cherokee”. There are, of course, other gleaming gems: “Comprende”, which also features the Spanish virtuoso harmonica player Antonio Serrano, Jacques Prévert/Joseph Kosma’s “Les Feuilles Mortes” (Autumn Leaves) sung in French by the sultry-voiced Amandine Savary, who also contributes a composition “Matices”.

But balancing that is sheer variety of rhythm and nuanced shading in Vera’s quiet playing, not the least in the slower, more elegiac pieces such as “Softvera”, with its restrained rhetoric here brought out by a perfectly judged tempo. Elsewhere, on “En Tierra Amiga”, as well as in “Up Cha Cha” there is a tricky balance of sufficient momentum, humour and a sense of wonder. In the hands of Jorge Vera, Ray Noble’s otherwise stately “Cherokee” gets a rapturous makeover. The pianist’s ability to recall almost any style of piano playing is brilliantly combined with the ambiguity and changeability of mood, together with the twisting changes of tempo to produce one of the most astonishing versions of the classic, thanks in no small part to the glittering contrapuntal duet with the bassist Tomás Merlo.

I would be remiss if I did not mention the excellent choice of musicians on this performance – from the horn players and, of course the production wizardry of Shayan Fathi, who also dazzles behind this battery of percussion, especially on “Up Cha Cha”. A recording to die for.