Jaimeo Brown’s music on Transcendence is among the most mesmerising ever put down on record in a long time; at least since a musician delved into the heart of the universal cry of pain at the moment of triumph of human endeavour. 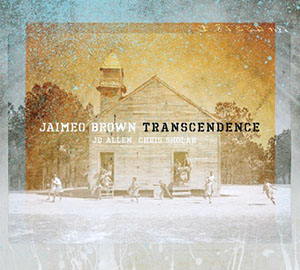 It is captivating from the inside out and draws the listener into its deep song, inspired by the power of blues and gospel to such an extent that it seems to come from the very vortex of the soul. For this reason it is music that cries out of the heart of every artist who has experienced the blues—from Africa and India, to America, where the blues came to fruition in the idiom of jazz and in the music of contemporary America that is born of blues and gospel and jazz. Add to that the elemental ache of Hindustani and Carnatic music and the elements of folk music of Africa and its equivalent classic music of Europe and its becomes a powerful and fine mixture expressed by a percussion colourist so skilled in melody and harmony, as well as rhythm so as to inhabit a rarefied realm in music today. How Jaimeo Brown has discovered the mystical and magical and invisible formulae that keep his music real is a matter of mystery discovered by just a few musicians; like Charlie Parker falling into a time warp, or John Coltrane experiencing the same. What the young Jaimeo Brown will do with this new-found discovery is a matter of conjecture, but for the moment it pays to fall prey to the hypnotic charm of his music.

Transcendence is a suite that seems to begin at the moment that elemental pain transforms the mind and the heart into a Music-as-Artistic-Expression. That Jaimeo Brown has captured its essence and filtered it into a session that distils its brooding emotion calls for recognising rare ingenuity in the young drummer. To experience what this means eyes must be shut tight and the music of “You Can’t Hide” must be heard from the pulsations of the rhythm to the aching lyric; the rage of the guitar and the thunder of the drums that beat out—miraculously—the melody of the tune. And then there is the gravitas of the organ underlining the beautiful piece, which is carried on to the next tune as organically as it does as if by magic. Mr. Brown might have discovered—as Bill Laswell did in his seminal recording of Pharoah Sanders and Maleem Mahmoud Ghania, The Trance of Seven Colours (Axiom, 1994)—the intersection of the blues of the African, the African-American and the Indian—as he melds the stellar voice of the Indian classical singer Falu and his drums and the heavenly bellow of JD Allen’s tenor saxophone in “Be Free.” This becomes a magnificent introduction to the epicentre of the suite: “The Power of God,” a thunderous etude of rare and mystical beauty that features the spectral chants of Gee’s Bend Quilters, flowing like a mighty river to the rhythm of Mr. Brown’s brushes on skins and Geri Allen’s rippling fingers on the keyboard of her piano.

All this would come to naught were it not for the music’s genealogical ode, “This World” the deep song of the soul that mixes the heart-stopping lines of JD Allen’s tenor saxophone together with the nameless baritone and bellow of the blues, juxtaposed with the magical drumming of Jaimeo Brown. The heartfelt pulsations of Mr. Brown’s drumming hark back to a rhythm so primordial that it creates, quite literally, a song of music’s beginning. None of this would be possible without the superb tenor saxophone solo and the atmospheric electronics that accompany the drumming and the vocals. All of this leads to a spectral chart featuring singer Falu’s beautiful vocalastics and the rhythms of the bass aspect of the tabla blended in with the raw guitar of Chris Sholar and the howl of the tenor saxophone on “Somebody’s Knocking”. The fire of the suite is clearly lit in the interplay between Dartanyan Brown`s rumbling bass and JD Allen’s spectacular solo that gives rise to a wild and almost vocal guitar solo that melds the melodic drums into a ghostly lyric ending to this piece. This majestic music creates as much of a stir in the soul at the point when it begins, through when drummer Jaimeo Brown questions the very essence of human pain in his smokey blues throughout the suite. The magic of this music is all the more evocative because of the wonderful ensemble and a production that appears so organically bound to the music that it is almost magical.

This is what leads to the final songs in the suite and the ultimate acceptance and triumphant feelings as the emotional detachment to this very universal ache is expressed as the joy of new birth (“I Said,” “Baby Miesh” and “Accra”) and finally two powerful charts: “You Needn’t Mind Me Dying” and in “This World Ain’t My Home,” both of which extend the discovery of spiritual awakening of “Power of God”. These spiritual expressions are the elemental sonic expressions of the swish of cymbals and the rattle of drums, which are picked up by the other instruments and voices in the ensemble and thrust into musical canvas that bursts alive with magical mystical music.