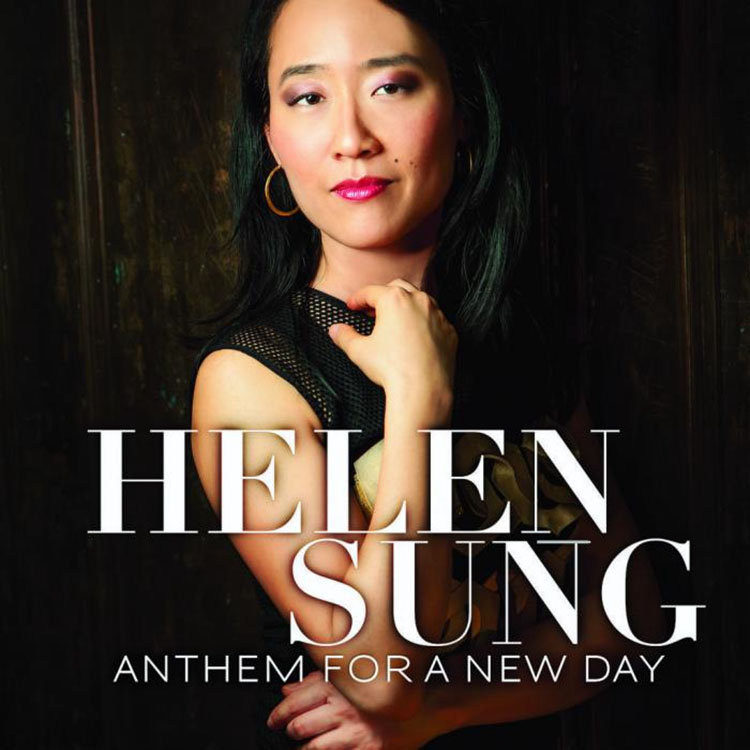 Helen Sung’s pianism is informed by elegance and an intellect that goes far beyond her young years. Both qualities cannot be learnt. The former is honed after much practice and filing away at the impervious edges of youth; the latter must be awakened after much study and performance. Either way this takes years for most musicians. It might be assumed that she began paying her proverbial dues a lot earlier than most musicians do. In doing so she seems to have absorbed the idiom of jazz like few pianists outside of the African-American Diaspora. It is true that many pianists of various backgrounds do play the music of jazz, but there is a kind of “admit one” into the inner circle as in the Dante-esque epic Divina Commedia that suggests that few musicians who have not grown up in the blues can be said to have become jazz musicians. Ms. Sung’s playing has that wailing quality about it that comes from being drenched in the blues. Her playing is at once melancholic becoming ecstatic as she is “saved” when the weeping is done. This is why her music is authentic and attractive. And then there is the matter of how her notes and lines ascend into a rarified realm, In this regard Ms. Sung’s playing is elevated to the extent that she is in a class of her own.

Short and long retinues of notes gather and then burst the imaginary embankment where they are shored up. These notes are not played on the keyboard so much as they are caressed from out of the keys most times the keys are depressed in order to utter their unique sounds. And yet there are times when Ms. Sung can be beautifully savage as she stabs at the keyboard hammering staccato passages and soaring runs and arpeggios. All this produces almost interminable lines that weave and bop in an air echoing with constant and wondrous invention. Every once and awhile Ms. Sung will seem to abandon all caution to the winds, dropping the longer lines in favour of short breathless ones. Her music flies in a linear manner, but just when it feels as if these long and loping lines are becoming par for the course, Ms. Sung will interject the conversation and the preaching with shorter ones, peppered with brilliant inversions. This is preeminent in both her tribute to Thelonious Monk, “Brother Thelonious” as well as in the classic tune that Mr. Monk wrote, “Epistrophy.” On the latter Seamus Blake shines like a brilliant uncut diamond. Here he matches the bobbing and weaving of the piano almost note for note and his solo—like almost everywhere on the recording—is truly memorable.

If ensembles are made to both propel the leader into a rarified realm, then quickly follow through as well, then this one does so with aplomb. Bassist Reuben Rogers interjects his version of the melody with brilliantly crafted playing of his own. Mr. Rogers is also one of those musicians who knows exactly when to present himself in the limelight by playing those darting melodic lines and supporting them with harmonic inventions that recall the very best tradition of the bass violin. And Obed Calvaire is a master of the polyrhythms that form the backbone of the jazz metaphoric syncopation. The group is magnificently supported by the Canadian trumpeter, Ingrid Jensen who brings her own earthy wail to the proceedings. Samuel Torres tears up the musical canvas then puts it together again when he is called upon to play. Clarinetist Paquito D’Rivera plays magically on “Armando’s Rhumba,” while Regina Carter waxes eloquently on the mere four strings of her violin. John Ellis plays a moving line as he bellows exquisitely on “Anthem for a New Day.” All in all this is a recording that Ms. Sung must be truly proud of as it is one of the years’ best in its class.

Pianist/composer Helen Sung has spent most of her life in two distinct worlds. A classical student from a young age who transitioned to jazz in her early twenties, she understands the limitless range and potential of the piano in a way that few specialists in either genre can. In addition, as the daughter of Chinese immigrants, Sung embodies two diverse cultures and has discovered a musical voice and identity that are true to both – and more importantly, true to herself. Sung was born in Houston, Texas. She began playing classical piano at age five, studying for most of her youth with a teacher who took a very narrow and hard-line approach. “She didn’t want me to listen to anything except classical music,” Sung recalls. “It was her way or the highway.” Read more…

Previous article
Charlie Dennard: From Brazil to New Orleans
Next article
Lest We Forget The Oscar Peterson Trio’s Canadiana Suite