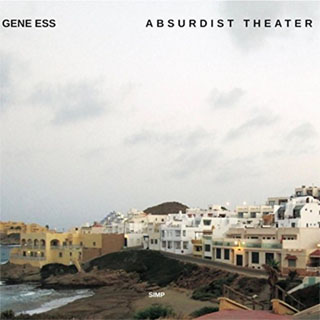 The beautiful, soaring coloratura that Thana Alexa indulges in at the start of Absurdist Theater by Gene Ess is all the time you’ll be given to breathe. After that it’s like being locked up in a pressure cooker. The music that unfolds between “Out Of The Ashes” and when Thana Alexa and Ess return put the album to bed is a veritable coiled spring conjuring a musical dialogue quite beyond the members of the ensemble. While we do not ‘feel’ the presence of the Theatre of the Absurd, per se, in Alexa’s vocal meanderings and Ess’ dissonances Samuel Beckett, Eugène Ionescu and the ghosts of everyone from Søren Kierkegaard to Albert Camus is invoked in the music.

The spiky daring of the compositions and the orchestrations and harmony is handled gently in the evocations of Gene Ess and his co-conspirator, Thana Alexa, granted respite from Manual Valera’s forays into the melodies. The cleansing energy that ensues seems to propel Alexa and Ess even further into the musical tension. Thana Alexa is perfect for the role. Hers is a voice and personality engaged in the drama: dynamics, tone, colour all serve to her character’s dark ride, serious ride into the fire. Gene Ess offers the reprieve and the effects of that take until the catharsis of “Déjala Que Pase” and finally “Upward And Onward!”. In between, of course, is music by Gee Ess that stands as some of the finest new work yet put on disc.

The reflective “Jade Stones” and fascinating “Déjala Que Pase” feature lyrics by Thana Alexa, whose partnership with the guitarist and composer seem a perfect fit. Both songs suggest that she has bought not only into the theme of the album, but also into the aesthetic of Gene Ess. But pulse and momentum are key to the music’s devolution and both are in capable hands. Bassist Yasushi Nakamura and drummer Clarence Penn maintain a steady ship while Gene Ess makes his forays into the musical subtext, drawing Thana Alexa into his ambit, then letting her loose. Manuel Valera too reads the idioms extremely well and responds with pianism that engages the melodies with masterful and compelling harmonic metaphors and when called upon to make a statement of his own, his soli ascend to enormous heights.

With Absurdist Theater Gene Ess takes us into a world so veiled in mystery that sound itself becomes a paradoxical intrusion. Once again his playing is of unfaltering poise and translucency. The recording is also excellent. This is a disc in a million.