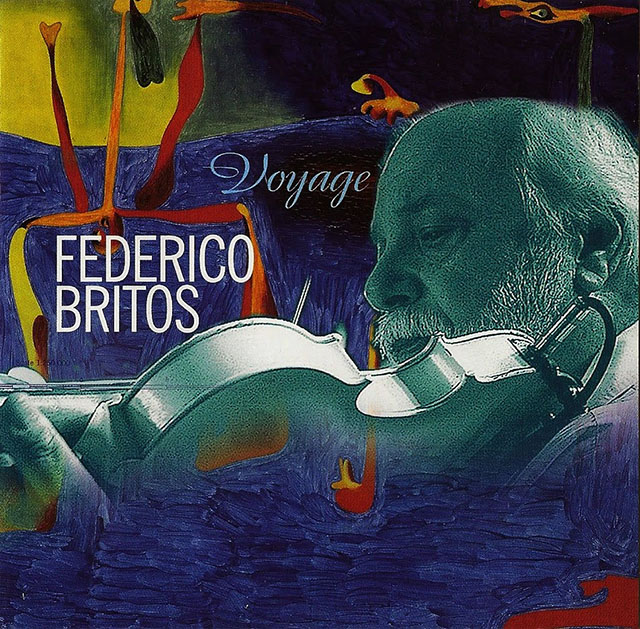 As the world continues to awake to the rising tide of undiscovered music and musicians from the South American paradigm—in an almost ironic kind of reversal of Alejo Carpentier’s voyage of musical discovery in Los Pasos Perdidos (E.D.I.A.P.S.A, 1953) or to the English-speaking world The Lost Steps (Alfred Knopf, 1956, Univ. of Minnesota, 2001)—the Uruguayan violinist Federico Britos celebrates five decades in the lonely and all but forgotten Chair of the Magisterium of South American Music with a spectacular Sunnyside offering, Voyage. This sojourn, documented at several moments in time is a dazzling journey featuring the violinist who was acknowledged as being somewhat untouchable in improvisational virtuosity by the great Jascha Heifetz as far back as 1959. The album also forms a monumental edifice that pays tribute to the melding of several idioms in improvised music and dance forms that characterize the music of the 20th and 21st centuries.

Federico Britos thrills throughout. His violin soars with sublime glissandi. It flutters and lets out melodious cries of triumph as he invents phrases and lines that revitalize old melodies. Britos ascends great heights of sound filling the silent spaces with speech-like gasps, high and mighty wails and epic moans that collide to create astounding sounds—beautiful, definitive arias hover and dance in the waning moments of their own music as the moments die into the past. However every moment of each song is a quantum packet of beauteous energy from the elegiac ballad to his wife, “Vivian” to the irresistibly seductive “Vivian Flavia de las Mercedes” and the memorable flamenco call and response of “Tomatito & Federico” a duet with the virtuoso Spanish guitarist, Tomatito.

Among the other gems on the album are the luminous versions of “Moonglow” and “Avalon” featuring Bucky Pizzarelli, a spectacular descarga—a hot Cuban jam—with the late bassist, Israel “Cachao” Lopez and two wonderful songs on which Puertorican conguero, Giovanni Hidalgo stretches majestically. The first is Rafael Hernandez’s “Capullito de Aleli” and the second is a track that closes the album on a high note, “Micro Suite Cubana.” On the latter, Hidalgo’s virtuosity is almost palpable and his wonderful solo throws the otherwise calm Britos into a violin frenzy of sorts as he reaches in to the uppermost register of his magnificent instrument, to play trill after trill of almost impossibly high notes with clarity and spectacular effect.

It is impossible to resist superlatives as Britos engages in triangular, quadrangular conversations with special other guests on Voyage. Bassist, Eddie Gomez, pianists Michel Camilo and Kenny Barron thrill to his music and respond in equal measure on “Vivian Flavia de las Mercedes” and “After You’ve Gone” respectively. The vastly underrated talents of pianist and arranger Carlos Franzetti are also represented here as is the percussion genius of Ignacio Berroa. These major artists, together with a myriad others make Federico Britos’ Voyage utterly irresistible.