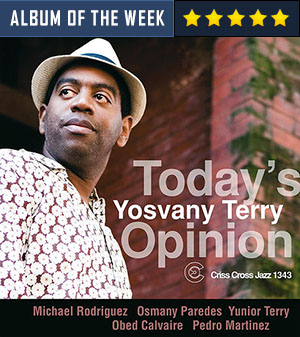 The work of a troubadour is never over. He traverses the world covering the geography of the liveliest hotspots on the earth as well as the emotional topography that becomes internalized as a result of his artistic adventures. What becomes beloved to his inner ear and his very soul also becomes his raison d’être; and this is exactly what Yosvany Terry’s monumental album Today’s Opinion stands for and delivers. Mr. Terry is a virtuoso saxophonist who plays both soprano and alto saxophones and he is also a master at the chekere, which he uses sparingly but to devastatingly beautiful effect. On this album he also shows himself to be a composer of music which is rich in complex melodies and rhythms as well as of considerable intellect. And this is what makes undertaking this musical odyssey with him and his ensemble pure, breathtaking joy. Listening to Mr. Terry’s music on this album becomes like a real life music lesson that begins in the most vibrant parts of Africa, leading from there via slave-ships, to South America—particularly the Afro-Caribbean areas of that part of the continent—but not before the musical caravanserai makes its way through the Europe of the Romantics and France, the Mecca for Moderns. 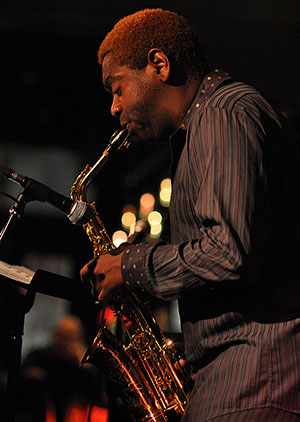 Mr. Terry is a true revelation among young saxophonists including Oscar Feldman, Miguel Zenón and a handful of others who have pushed the boundaries of, specifically, the alto instrument. But Mr. Terry has a singular voice, gliding like a modern-day Paul Desmond, with the sharp rhythmic edge of Eric Dolphy. Playing with extraordinary expression and intonation, Mr. Terry leaps and vaults as if he were perched on a cantilever, teeter-tottering this way and that. His tone is warm and moist, yet has a bronzed edge and it wavers as if he were making sheets of sound out of that brassy material from which his instrument was forged. His phrasing is spare and with spry elevations Mr. Terry seems to cut through the air making ever widening arcs and parabolas. Sometimes his tone is so ponderous so as to almost sound excruciatingly thoughtful. This is most discernable when he is paying homage to the masters such as Sindo Garay, Louis Armstrong and a host of other griots; the great storytellers of the past. This is when he is ensconced in music that is wrought from the events of the past that have helped shape his future vision. Today’s Opinion is essentially led in that direction.

The majestic underpinning of “Contrapuntistico”; the glacial spirit of “Another Vision of Oji” and the marvellous revelry of “Son Contemporaneo” are masterful examples of Mr. Terry’s musical vision that stretched from way in the pulsating poly-rhythms of Africa to the soaring polyphony of classical and modern impressionistic European music. These charts must easily be among the most intelligent musical etudes culled from a mind heart and soul of a musician, who dreams of deep song, but can also fibrillate with the joyous expression that propels him and his saxophone—be it the alto or the spiralling soprano that uses both earth and interstellar space as touchstones. Of course these are not the only songs that excite the senses. The thoughtfulness of “Inner Speech”; the wide-eyed and nostalgic of “Returning Home” and the sheer uplifting joy of “Harlem Matinee” are delights for the inner ear. Mr. Terry’s brother and bassist, Yunior Terry has also contributed an ecstatic ballad, “Suzanne” together with Márcio B.A., which shows an affecting influence of the great Hermeto Pascoal.

The joy and wonderful beauty of the music has also got a lot to do with the brilliance of the ensemble that Mr. Terry has brought on board to express his music. Trumpeter Michael Rodriguez blows his horn with a great deal of deference to past masters as well as to air his own spectacular voice; pianist Osmany Parades gives notice of being one of the boldly expressive new voices on the grand instrument. Yunior Terry is magisterial and plays with mighty filial empathy; Obed Calvaire provides further evidence that he is one of finest drummers playing today; Pedro Martinez plays and sings with deep spiritual zeal and the presence of Gonzálo Rubalcaba provides a sashaying push for the sensational music of “Son Contemporaneo”. Of course, though slyly audible Yosvany Terry’s performance on the chékere is nothing short of dramatic and beautiful, providing further evidence that Mr. Terry is not just an important musician but also on his way to becoming a legendary exponent of that fantastic instrument. Today’s Opinion is a major album by any standards—classical or modern.

One of the greatest and everlasting legacies of Johann Sebastian Bach is his invention of bass line melodies – especially...
FROM OUR VINYL STORE