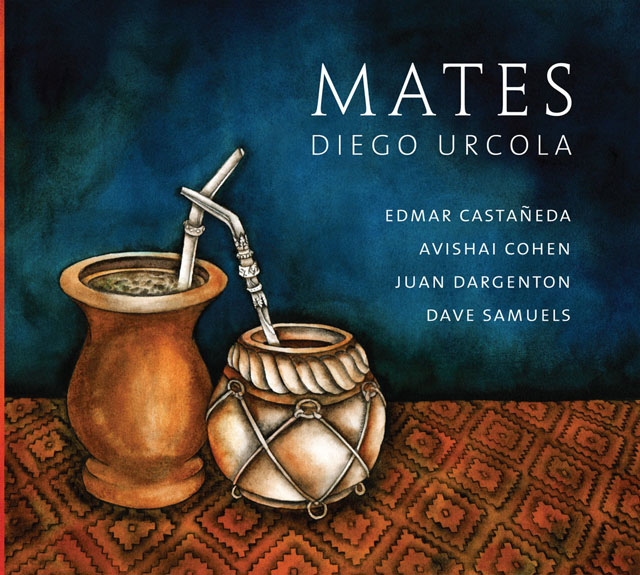 The stories of tea and its discovery—depending upon which part of the world they come from—are delightfully apocryphal. But the taking of tea is real and ceremonial although the stories told at that time may be once again exquisitely mythical. It is both the ceremony and the legendary narratives that fire up this wonderful album by Diego Urcola: Mates. Here, a series of fourteen sensuous, intimate and duets unfold, which makes the instruments that play them almost human. This harks back to the legend of the Guarani diaspora, traditionally spread across Uruguay, Paraguay, the Misiones Province of Argentina, southern Brasil and Bolivia; when, it is believed, the Goddesses of the Moon and the Cloud came to earth to meet, but were threatened by a Yaguareté. An old man saved them and in return, he was blessed with a gift of the yerba plant, from which is brewed the “mate,” which became the traditional drink of friendship. In celebration of this story, the musicians, led by Mr. Urcola come together and entwine in duos, building double helical edifices as they dance and prance around the omnipresent horn of Mr. Urcola swinging contrapuntally as they leap sometime free, held together only by the gossamer of musical harmony, exchanged between trumpet, and flugelhorn alternatively with double bass, harp, vibes and marimba, and bandoneón. Imagery is sometimes diffracted or, at other times with the exactitude of cubist architecture; the vibraphone sings, the bass rumbles with gorgeous overtones; the harp sparkles and the bandoneón gurgles marvellously as the music soars in the invisible steam of the simmering mate.

It is Diego Urcola and his glimmering, brazen horns that add the glorious colours to the music on this date. Mr. Urcola is a true master of tonal shade; his embouchure perfected by full lips and steaming hot breath that escapes them. The column of invisible, smoky lyricism departs his taut mouth dipping first into a gorgeous palette composed of the burnt tones of the sertão and interior from where the music leaps out and bursts forth with celebratory beauty, awash with myth and legend. With his unbridled virtuoso skills, Mr. Urcola’s music emerges out of a wellspring of traditions that criss-crosses Latin America as he makes anthropological stops in Argentina, Uruguay, Paraguay and Brasil, as well as into Colombia and into the halcyon days of song in North America. Essentially, what the trumpeter is trying to and successfully creates is a musical “mate” ceremony where gossip and jabber is replaced by melody and harmony. And he does so with some of the most beautifully crafted music which is fit, incidentally, for a meeting of those mythical creatures where he (the trumpeter) becomes the old man saving them from the stealthy jaguar. His reward: “mate” of music which he turns into a gloriously harmonic journey together with his duo mate for each song.

Diego Urcola’s choice of musicians for each duet is truly inspired. To start things off there is the lusty and sonorous bass of Avishai Cohen in the invocation to “Eleguá,” and the unbelievable vertical leaps on “Gadu” by both trumpeter and bassist precedes the elegiac swoon of the con arco playing of Mr. Cohen as trumpet leads him on through the melancholic “Float” to the joyous strains of muted trumpet chased by the bounding pizzicato of the bass in Carlos Gardel’s silken classic, “El Dia que me Quieras”. The gasping bandoneón of Juan Dargenton is just as breathtaking through his series of duets from “ELM,” the skittering tango, “Milonga Para Paquito,” a wonderful homage to Mr. Urcola’s old boss and mentor. Trumpeter and bandoneón player are in unbelievably superb form on the brooding version of “You Don’t Know What Love Is” and the myriad colours of “Final Waltz”. The Harpist, Edmar Castañeda, already a rare and gifted musician who excels at the difficult harp comes together with Diego Urcola in three songs. The first of these: “Colibrí” soars like an Andean condor as Mr. Castañeda plays the character of the Wind that rustles the trumpet, pushing it into the higher registers as if lifting the wings of the proverbial bird. Mr. Castañeda returns for the Ariel Ramirez’s classic “Alfonsina y el Mar,” a song that he provides fluttering lift to and counterpoint to Mr. Urcola’s mysterious and beautiful muted horn, just as it does in “Colombian Dixie”. When it comes for Dave Samuels to perform his star turn, Mr. Urcola traverses the Brasilian landscape with Egberto Gismonti’s beautifully complex chart “A Fala da Paixão”. Here Mr. Samuels struts majestically on vibraharp; elsewhere, as he does on “Preludio # 3” before doing a star turn on marimba, on the charmingly quixotic “Samba Pa’Dos”.

With this album, Diego Urcola makes great strides after his earlier Sunnyside release, Appreciation (2011) making his homages here more intimate and considerably glossier as he digs much deeper into his musical consciousness to make this magnificent music on Mates.