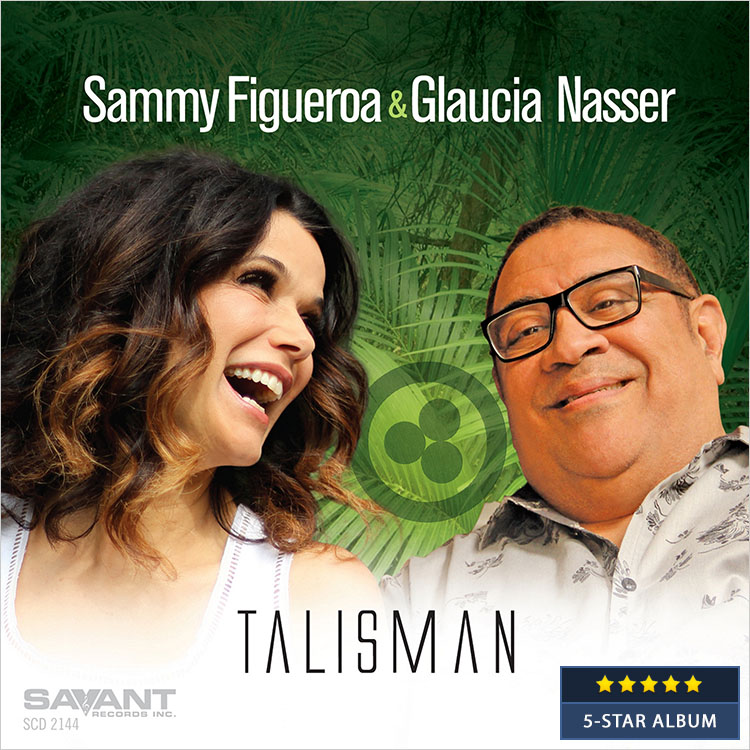 It is not unusual today for the music of any idiom to collide with another and produce a seismic event in both idioms. Music marketers call that “world music.” However, the music on this recording Talisman, a collaborative effort between the Puerto-Rican-born Sammy Figueroa and the Brasilian “farm girl” Glaucia Nasser, is far from that empty genre. Still, the music is neither partially Brasilian, nor partially Latin, but performed in an idiom that is powerfully unique, as powerful as the congas and batá of Mr. Figueroa that replace the surdo of Brasil. And that idiom has no name. Suffice it to say that the wonderful music on this album is wholly Brasilian and wholly Latin and the glue that binds that together is the unique influence of Africa that added to the unique flavour of both Brasilian music as well as the rest of the Caribbean islands. This in turn has resulted in the countries of the Caribbean and from those erstwhile Spanish colonies such as the Dominican and Puerto Rico to Cuba and other parts of South America been drawn relentlessly and inexorably closer to one another despite the efforts of canny politicians and marketers who would gladly have them stay apart. And now there is this: a magical recording of music that be-straddles the worlds of Brasil and of the rest of Latin America via Cuba and Puerto Rico like an enormous gem that binds the two ends of a priceless necklace.

The beauty of this music is not simply its idiom, forged on the anvils of Afro-Brasilian and Afro-Caribbean music. It would be nothing if it were not graced by the exquisite voice of Glaucia Nasser, who appears to come to this recording only to be transformed into a muse for the rest of the musical cast. Then there is the small matter of the suggestion at the behest of none other than Duke Ellington that the drum is a woman. Here the suggestion is wonderfully borne out by Sammy Figueroa who caresses his congas and even the plucky and intense batá drums that have their origin in Yoruba culture, direct from the Orishas that were born in Nigeria and brought out west and secretly celebrated for fear of dire punishments from the conquistadors. But back to Ms. Nasser: Her beautifully unadorned voice is actually adorned by its own naked softness and smokiness. Her vocals would convulse an entire band if she were not so gentle of spirit. She plays opposite to the fecund and raw sound of the congas and the batá. Ms. Nasser is that kind of vocalist who bares her soul every time she opens her mouth to sing. Her music comes from the bottom of her feet and is so nude that it is bestowed only by its own blithe spirit. The retinue of notes creates long and lissom lines that shape themselves into wide arcs beautifully carved out of thin air and strung across the room. What she sings becomes a gorgeous and endless variation of themes and motif informed by spectacular vocal gestures.

Sammy Figueroa for his part shapes the lines as only he can. A master of the use of his big and gentle hands, the percussionist does take Duke Ellington’s suggestion to heart. His manner is never severe. He packs air into the palms of his hands and seems to apply that to the skins of his congas and when he takes a crack at the batá his hands turn flat and as skin meets skin the drums begin to talk and the music to dance as the percussive colours daub the music. It is here that osmosis occurs. The rush of colours set free by the percussionist are dyed into the fabric of the vocal and this defines the music of “Talisman,” “Ilú-ayé” and “Boca de Siri” for instance. Mr. Figueroa does not simply let loose a riot of colour when he uses various percussive instruments. He creates the rhythmic base culled from the polyrhythms that inform the music of Spanish tinged America and the African nature of the entire southern part of the continent. The music is also wonderfully enabled by guitarists Chico Pinheiro and Michi Ruzitschka as well by the masterly touch at the piano by Bianca Gismonti, who must have surely learned from the best. IN the end this album belongs to a whole new worlds spawned by the old and still-thriving worlds of Africa and the native populations of the countries of South America who once welcomed the people of Africa, who, in turn, changed the destinies and cultures of the countries of the continent of America forever.

Sammy Figueroa has long been regarded as one of the world’s great musicians. As one of the world’s leading percussionists he has played on countless records, providing the rhythmical framework for hundreds of hits. Well-known for his versatility and professionalism, he is one of the few percussionists equally comfortable in a multitude of styles, from R & B to rock to pop to bebop to Latin to Brazilian to New Age. As one of New York’s most sought after session players Sammy played on countless albums, jingles and film scores and appeared often on The David Letterman Band and the Saturday Night Live Band… Read more…

Nobody knows for sure where a song starts. Would it be the lyrics popping first and asking for the matching tunes or the other way around? Or maybe, who knows, the author whistles at random and finds the right melody for his verses? ?Becoming an artist is quite like that as well, there is no scheduled start. There are those whose talents are inherited, there are those who are the first in generations to get involved with some kind of art. There are those who build themselves as artists, choosing art as the right path and carve out of themselves the vocation they haven’t been given from the cradle… Read more…