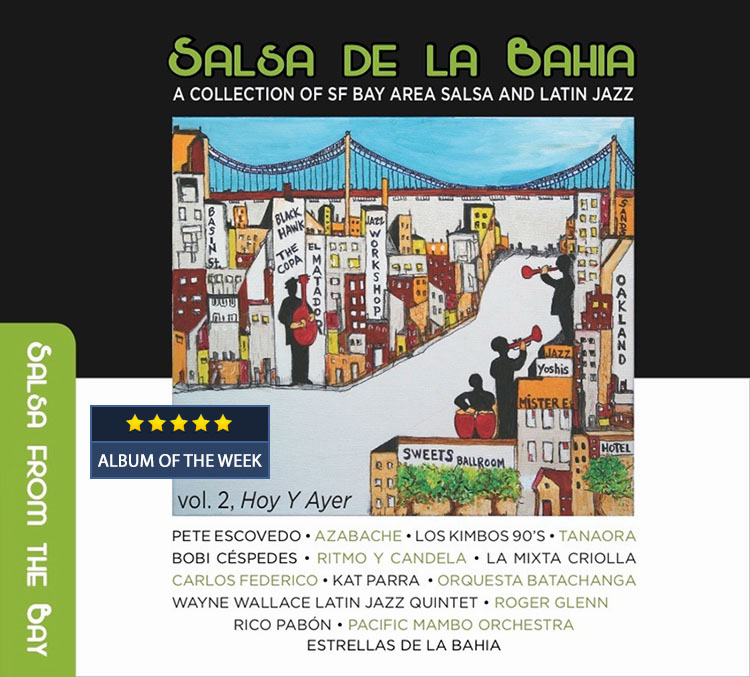 Wayne Wallace and the folks at Patois Records have continued where they left off in 2013 with another equally exciting second instalment to the soundtrack of the film, The Last Mambo. Unless there is more music in the can this part of the soundtrack will predate the release of this much-awaited film in 2015 directed by Rita Hargrave. This album is subtitled Hoy y Ayer and is somewhat shorter in length than the Vol. 1. But it is hardly short on the quality of the music and the overall package. It must be said that some ensembles make return appearances, but by and large, this is a distinctive package. This is, once again, a collection of high-spirited music which showcases both the breath and the uniqueness of the heritage of Bay Area Latin Jazz. While the music celebrates the roots of Afro-Cuban music the new life in the idiom of Latin Jazz makes for an exquisite collision between the cultures of Havana and San Francisco in a seamless mix of Afro-Cuban son, mambo, rumba and Guaracha. For the mixed communities of the West Coast in Bay Area in the 1950s and 1960s, that music was inspiration. But Latin Jazz really blossomed—this time explosively—in the 1980s and Wayne Wallace was in the vanguard of that movement. So it should come as no surprise that Mr. Wallace should be in the producer’s chair of Salsa de la Bahia Vol. 2.

The iconic tapestry of Afro-Cuban music is translated into salsa, a form of music that became unique in the Bay Area in the 50’s and 60’s. Its idiom celebrates with joi de vivre the mood of ebullience and optimism of those decades that came to fruition some thirty years after the fact. The call and response between timbales and congas, piano and the bongos’ voice with brass and woodwinds is infectious. Just as swing literally swept listeners off their feet and transformed even the most diffident into dancers, so also does this salsa and Latin Jazz. The beauty of song and dance is captured in charts such as “El Martillo de Armando” and “Montuno Street,” just two of the magnificent pieces from CD 1 of this double CD set. The beautiful noise and the enchantment do not die down with simply these tracks or charts such as these. It continues through to “Que Viva Chango” and “San Francisco Tiene Su Propio Son”. Make no mistake this is unique music that is culled from the purest of pure Afro-Cuban musical dialect. Yet it is uniquely expressive because of the musicians who create it. These include not only Wayne Wallace, but Pete Escovedo, John Santos, Estrellas de la Bahia and others.

The stars of the Bay (Area) continues through the second part of the package and with unique fare from musicians such as Roger Glenn and Kat Parra, who usually sings in Ladino, that all-but-forgotten idiom that combines Latin with Hebrew and Yiddish; that unique Sephardic inspired music that Ms. Parra has come to embody. But whatever the metaphor and dialect employed the central muse is Afro-Cuban in the Montuno setting and it is magnificently rendered by brass woodwinds and especially the tres of Greg Landau, one of the central figures in this movement of Bay Area Salsa and Latin Jazz. CD 2 features as well a mambo legend: Panamanian-American pianist Carlos Federico and his “Operation Mambo.” This is a fitting way to close this memorable recording. Now all that is left is to hear the music from Volumes 1 and 2 as a soundtrack to the long awaited film, The Last Mambo.

About The Last Mambo

The Last Mambo explores the world of salsa/Latin jazz in the San Francisco Bay area from diverse perspectives of dancers, DJs and musicians. The film discusses how the dance aesthetic, musical presentation and cultural context have changed in the wake of Afro-Cuban music’s growing popularity and commercialization. The Last Mambo, punctuated with interviews, photographs and concert footage captures the spirit of salsa/Latin jazz, celebrates its rich cultural heritage and debates the nature of its future. Read more…