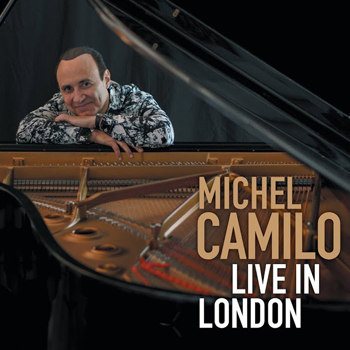 In the experiencing of a stage recording by Michel Camilo, such as Live in London, one must contend with a performance that has much more than a dash of showmanship. Few pianists of his or any other generation have quarried more musical sources, not only making the material his own but also played each and every show-stopper demonstrating that he can – and does, indeed – play octaves faster than anyone else. Why, he even hits the keys with such speed and seemingly with such force that sometime one fears that he could simply break them. But he can also play softly and slowly, appearing to caress the keys rather than striking them. Still one is at odds with the fact that solo piano is a solitary pursuit when listening to Michel Camilo play: he seems to thrive on bringing his pianism to a public more often dumfounded by his virtuosity – and his technique as well…

Michel Camilo has a profound grasp of the piano and almost always seems to bend the monumental instrument to his will unlike almost any other pianist playing today. He often tends to take this to greater lengths. In this he surely follows Oscar Peterson and Oliver Jones although both the Canadians are not nearly as extroverted as Mr Camilo is and listening to Live in London it becomes patently obvious that Michel Camilo was born to share his art in public. The fact that he thrives on having an audience seems to be confirmed on this recording. It feels at times that the moisture and warmth of their collective breath bears him on wings and spirits him and his music to the vaunted heights that he seems to attain no sooner than his fingers alight on the keyboard.

Contrarily, though, the recording does not begin with fireworks. “From Within”, one of his most famous works – especially memorable from his performances with the drummer Horacio ‘El Negro’ Hernández and the bassist Anthony Jackson – begins at almost an unfamiliar whisper. Mr Camilo also works up the storm somewhat later in the piece than he does with Mr Hernández and Mr Jackson – the drummer and bassist contributing mightily to the thunder and lightning that ensues. On Live in London, however, Mr Camilo shapes the massive structures of the piece differently and all on his own using an almost surreptitiously smooth right hand to foretell the coming of the tempest with his left hand.

Similarly on “A Place In Time” and “Island Beat” Michel Camilo seems to conjure up something he would do with larger, more fluid, symphonic arrangements of the works. With “The Frim Fram Sauce”, “Manteca” and the Gershwin/Tizol/Goodman medley one has to marvel at how much more there is in his renditions of these pieces that is new, musically, and discovered by genuine intuition as Mr Camilo brings all his formidable talent to bear on what might easily otherwise have become tired works. And finally who can deny that there is a hopeless Romantic in his loving tribute to his wife on “Sandra’s Serenade”? All in all Michel Camilo once again gives an overwhelmingly powerful and authoritative performance making even old works gleam like new.