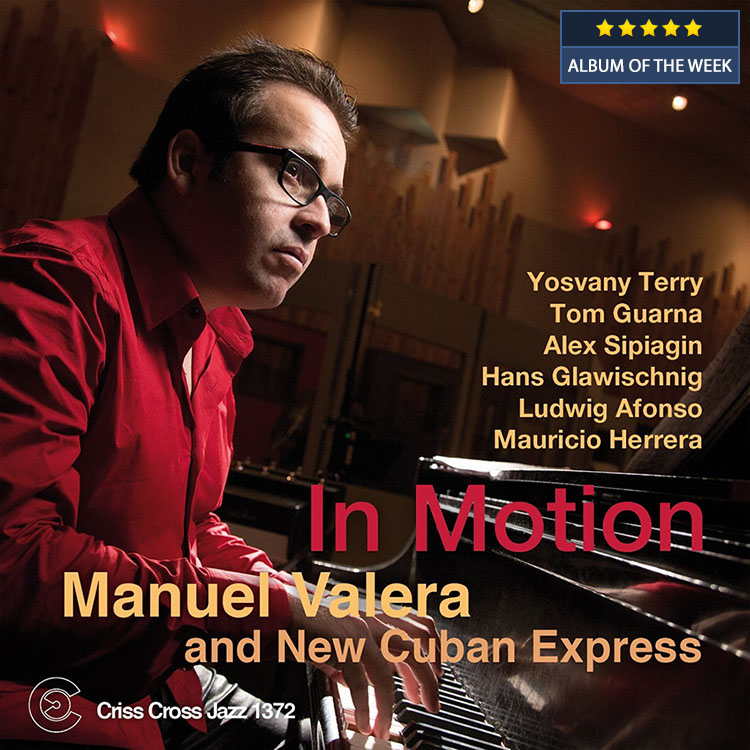 What’s new in the idiom of jazz? The next generation of Cuban musicians have arrived. Look no further than what they have brought with them. It is not really a difficult assessment to make. Manuel Valera, David Virelles, Yosvany Terry, Elio Villafranca, Dafnis Prieto, Charles Flores (whose life was cut short before he could release his seminal contribution), the great Hilario Durán (stop underrating him), and a handful of others. These are the young masters who paying tribute to the grand masters of Afro-Cuban and Jazz idioms have helped to make much music. They have infused the Blues and Jazz with Blues and Jazz of their own. Their music is tempestuous, beguiling and always exciting. Like making that left turn unexpectedly to find something so inviting that the listener is stopped in his or her tracks. This new album by Manuel Valera and the New Cuban Express In Motion is the third release since Mr. Valera formed the band. The new cast of characters includes the terrific bassist, Hans Glawischnig and awesome trumpeter Alex Sipiagin. This incarnation makes them somewhat stronger than they have ever been, not that John Benitez was not a fine member of the band, but their sound has become rounder and fuller with the addition of a trumpet and the more voluptuous acoustic bass.

Of these musicians, the Afro-Cuban idiom is more pre-eminent in the music of Hilario, David Virelles, Yosvany Terry and Elio Villafranca. The music of Manuel Valera, Dafnis Prieto and Charles Flores, has come to be represented by some sort of Confucian reed by the water’s edge, bending in the wind and twisting yielding to onrushing jazz idiom so that their elasticity is more pronounced. And this is the most evident in the music of Manuel Valera, who has taken musical meter and stretched it as far as it possibly can. His writing plays on the innermost ear like a very fast game of hopscotch, swinging, skittering and chasing the stone. This has become—in the case of the music—its heart that is no longer besting in its regular rhythm, but racing and skipping the odd beat every now and then. In the delightful melee is Mr. Valera who is a study in grace and beauty. Of all of the Cuban pianists playing today his pianism is most strongly aligned to classic melodicism. The rhythmic element of his left hand exists in the dance-like structure that holds up the melody like an edifice that is suddenly built before the wonderstruck listener. Suddenly because all the while the ear has been tuned to the percussion that has been adding subtle colours and tones to the music; then Mr. Valera solos and he gently shifts focus to the piano. His statements are elaborate as he expands on the geometry of the melody making wondrous structures in a high-wire act that is breathtaking to behold.

Manuel Valera is one of the most generous of musicians on this and other albums that he has made with various groups. Here, on In Motion his music unfolds best in the collaborative effort that he has forged with this ensemble. His ability to arrive in the limelight and withdraw from it is generous. This is evident in most of the music here, but is especially gracious on “Descargando,” the profoundly beautiful “Bantu” and the epic “Storyteller,” which are just three of the defining tracks on this exquisite album.

Based in New York City, Grammy nominated artist, pianist and composer Manuel Valera was born and raised in Havana, Cuba. Since arriving in NYC, he has become well known in the NYC modern jazz scene, garnering national reviews and lending his talents as a pianist and composer to such notable artist as Arturo Sandoval, Paquito D’Rivera, Brian Lynch, Dafnis Prieto, Jeff “Tain” Watts, John Benitez, Samuel Torres, Joel Frahm and Yosvany Terry among many others. Read more…