Leo Gandelman may have set out to make a record documenting the arrival from the North East of saxophonists who contributed to the historic development of choro from the 1920s on down to the present day. However, he succeeded in making much more than that… 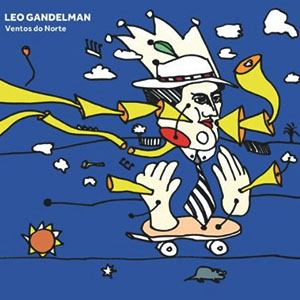 Ventos do Norte (Northern Winds), a record of exceeding beauty for he has a tone as warm as Stan Getz on tenor and as moist as Paul Desmond on alto saxophone, whose music he certainly heard and absorbed. Now that he is his own man and a sublime practitioner on all forms of the saxophone each time he plays and makes a recording, his position is elevated in the pantheon of saxophonists along with those he has admired over time. Most of all Mr. Gandelman has a singular voice. It comes from the magnificent manner in which he re-constructs the exquisite melodies—choro all of them—which, while keeping a historical perspective, he makes altogether new, developing them with broad glissando as he makes the music leap from plane to plane, dive and pirouette into magnificent elliptical forms that seem to begin at the beginning, then loop and charge seemingly from nowhere to catch up with the melodies after dramatic inversions and somersaults; wondrous arcs and phrases strung together like illuminated necklaces. Once he gets going—and that could be anywhere in a chorus—there seems to be no stopping him. He seems to create endlessly beautiful improvisations before returning to the melodies that began them, which in turn are made absolutely new once again.

En route to the making of this memorable album, Mr. Gandelman establishes a veritable timeline of emigrating saxophonists from the northeast—his true outflow of winds from the north, the allegorical title for this album—and what an illustrious line to link up with. Luiz Americano (1900—1960), perhaps the first to descend upon Rio from the north, whose compositions “Dancing Avenida” and “Sorriso de Cristal” form something of a spine of the recording. Both compositions from the first quarter of the 20th Century are trailblazing. Another familiar name from the past is the great Pixinguinha (1897—1973), a musician under whose pen the choro became truly famous. Rathinho (Severino Rangel de Carvalho 1896—1972) was a close associate of Pixinguinha and is glorified by two charts: the gorgeous show-stopper, “Saxofone porque Choras” and the maxixe, “Vamos pra Caxangá”. Severino Araújo de Oliveira (1917 – 2012), another great choro musician is represented by Mr. Gandelman’s exquisite re-imagination of “Espinha de Bacalhau,” an extraordinary song with a more extraordinary swing. K – Ximbinho (1917 – 1980) composed the sensuous and moody pieces, “Eu quero é sossego,” “Ternura” and “Perplexo” the latter melding choro and jazz idioms with astounding results. The composition by Netinho (1921 – 1994) “Chorinho de Tula” is as exquisite as it is fluent and classy as are the two Choros by the inimitable Moacir Santos (1926 – 2006): “Triste de Quem” and “Amphibious”—sambas lased with batucada. Pixinguinha’s great frevo, “Bicho Danado” and the charismatic “Cara Lisa” by Duda (1935 – ) close out this magnificent album.

Just as Leo Gandelman’s classic Radamés e o Sax (Biscoito Fino, 2006) was the first to pay homage to the Brasilian composers of classic charts, this album, Ventos do Norte appears to be its bookend; classic repertoire from Brasil’s greatest urban music that makes for an emotional tribute to lovers of that great country’s music and way of life. It also establishes Leo Gandelman as one of its finest exponents of both choro and (now) every form of the saxophone, with which he plays with delicious ingenuity.

Leo Gandelman on the web: leogandelman.com.br