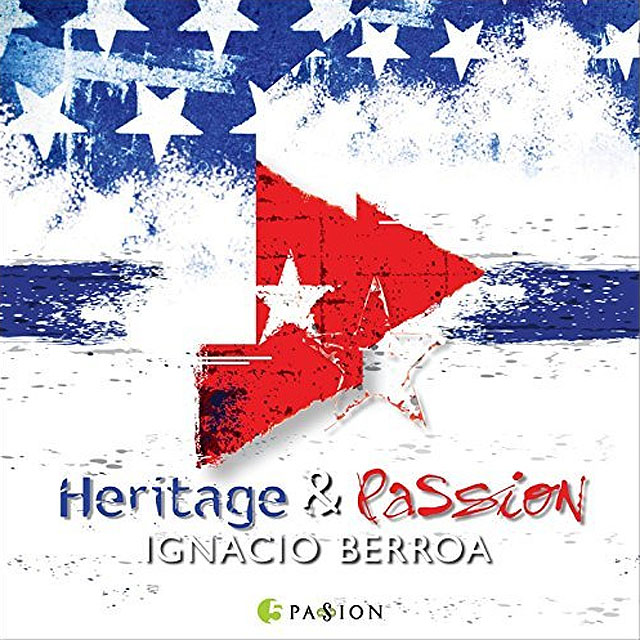 Heritage and Passion… Never was an album so aptly titled and rarely has an album been so magnificently and ingeniously crafted. And while synthesizers and midi controllers may have been used before to great effect by the likes of Miles Davis, Weather Report and by Ralph Towner and Oregon, and Lyle Mays, the crafty manner of their use by Gonzalo Rubalcaba and Mark Shim is absolutely alluring and inventive. But first there is this: from behind a battery of drums and cymbals, Ignacio Berroa conducts his ensemble with ingenuity and his drumming simply catches fire as the music progresses. There are drummers who are more explosive than Mr. Berroa playing today. He is one of those extraordinary percussionists who came to the attention of the world of music when he appeared with Dizzy Gillespie’s United Nations Orchestra. He played no small role there. His mastery of tuned percussions brought untold joy to the music of that incredible band. Since then Ignacio Berroa’s musicianship has assumed magisterial proportions, reaching a place that can only be described as the envy of the percussionists of this day.

Ignacio Berroa’s music is informed by a voice that is at once extroverted and exuberant, as it is masterfully Afro-Caribbean, Afro-American and polyrhythmic. Can this really be so? Many have tried but few have been capable of mastering the mysteries of both types of drumming despite the fact that the music of both cultures grew out of a similar polyrhythmic origin. Even the great drummers of Jazz have found themselves agape at the primordial vitality of Afro-Caribbean musicology. Here is where the visceral nature of Mr. Berroa’s music gets more interesting. For like Horacio Hernández, that other Cuban-born genius, Mr. Berroa combines the momentous rumble, and the epochal musicality of Afro-Cuban and Afro-American drumming with the delicacy of tuned, Western symphonic percussion. There is a case here for acknowledging a rare melodic and rhythmic genius of Mr. Berroa; a genius that has blossomed as he turned to a form of expression that literally gives voice to his chimerical inspiration: African polyrhythms that have become second nature to the music of the Caribbean and continental USA.

The magnificent collision between Ornette Coleman’s exquisite and elementally bluesy song, “When Will the Blues Leave” and the joyous Cuban classic “Vine Pa’ echar Candela” and between “La Bayamesa” and “America the Beautiful” will be recognised as the stuff that legends are made of. The inexhaustible surge of rhythm and melody expresses the sheer joy of being alive. “Ignacio’s Solo” is more than a delightful miniature; it is a veritable rhythmic poem evoking the fibrillations of a highly excited heart beating inside a body in the throes of a memorable song. Much of this “memorable song” owes much to Gonzalo Rubalcaba, whose mythical genius is all over this album. This should not diminish the contributions of pianist Luis Perdomo, guitarist Adam Rogers and saxophonist Mark Shim. Their playing may be likened to virtually uninterrupted and blossoming melody that only enraptured music is made of. Nor is the work of bassists Boris Kozlov and Ricardo “Ricky” Rodriguez any less memorable. The complex allure of music made simply beautiful? Such is the inevitable magnificence that is all over this album.